Blowing the Dust Off


It has been a while since I've posted here. I thought I would drop in to dust a bit and offer a bit of an explanation. 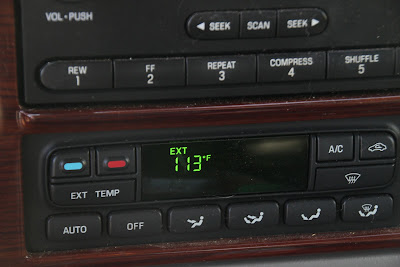 Yeah. And that isn't some one-off mini-heat wave either. The daily high has been over 100F every day since June 29th, except for two days, and the highs on those two days was 97F and 99F, respectively. We have had virtually no rain, so I have dropped a G and a half on hay this month. The one day in June we did get rain, it was accompanied by enough hail to basically total the roofs (rooves?) on my house and barn. So, I have the pleasure of dealing with the insurance and mortgage companies, along with finding a contractor to replace them.

So with a general lack of energy, and a very specific lack of money, it has been pretty quiet on the card front. But, I am still planning a review of the 2004 Upper Deck Yankees Classics card set. Plus, there will be a big card show in town on August 13 and 14. I am hoping I will be able to knock off a big chunk of the remaining cards on my 1977 Topps set at the show. So, maybe I'll have a few posts coming up here soon.

If I don't spontaneously combust beforehand.
Posted by carlsonjok at 4:20 PM