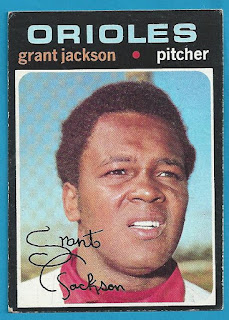 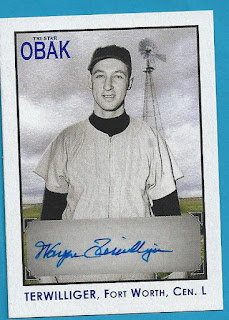 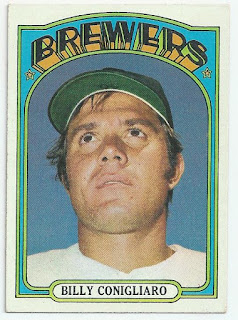 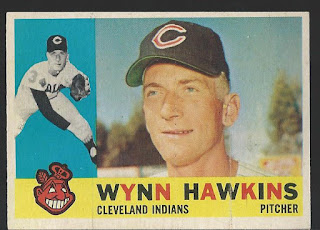 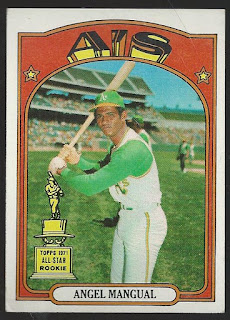 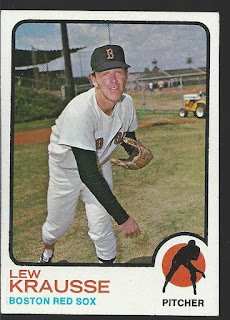 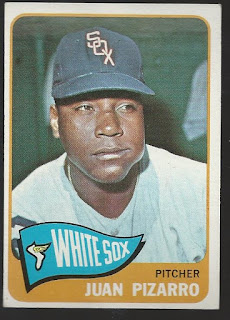 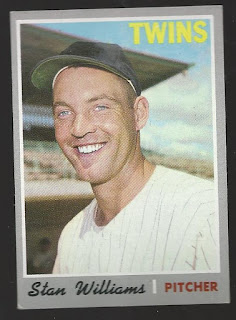 Posted by carlsonjok at 3:56 AM No comments:

I've had a lot come at me this last few weeks.  It was announced  that my employer is being acquired by a larger company and I am staring into the teeth of a major transition.  Then my 84 year old mother had to have emergency surgery a bit over a week ago. I was up there last week, though I mainly was dog sitting, since I wasn't allowed in the hospital.  She did come home about a day before I left.  So, I will be going up again next week to help her recover.  With the job uncertainty and the extra travel expenses, I am going to take a hobby hiatus. So, this post will likely be my last hurrah for a little while.  It isn't like I was all that prolific to begin with, so no one probably would have noticed anyways.

Before all this came up, I was watching a number of signed 1961 Fleer cards on an auction site.  There were seven I was watching, but five sold for way more than I was willing to pay.  But, I did win two! 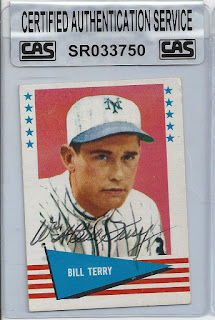 Bill Terry played his entire MLB career with the New York Giants (1923 to 1936), mostly as a first baseman. He was elected into the Hall of Fame in 1954 and is still the last player to hit over .400 in the National League.  He did that in his stellar 1930 season where he hit for a .401/.452/.619 slash line and tolled up 254 hits, which is still tied for 3rd in the single season records for all of MLB, tied with Lefty O'Doul and behind only George Sisler and Ichiro Suzuki.  From his age 33 season (1932) through the end of his playing career, he was also the Giants manager and he continued in that role for 5 more years after his days in the field ended.  In his second year as player manager (1933) he guided the Giants to a World Series championship.
As you might expect, there is a wonderful SABR biography. 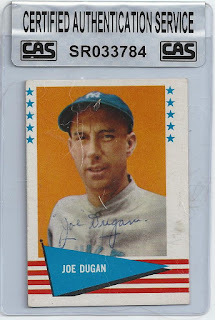 Joe Dugan is an unlikely player to show up in a baseball greats set, like 1961 Fleer.  If such statistics are to be believed, he was effectively a replacement level player, racking up 9.4 total WAR over a 14 year career spent mostly with the NY Yankees and Philadelphia Athletics. Therein lies a clue though.  Dugan was the Yankees starting third baseman from 1922 through the middle of 1928. In that role, he appeared in five World Series, three of which the Yankees won.  He hit a 3 run inside the park home run in Game 5 of the 1923 series.  Thankfully, for your reading pleasure there is a SABR biography. 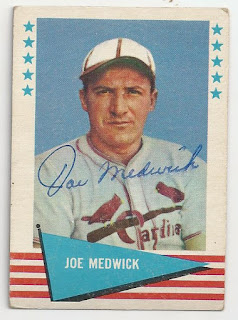 And now, one of the crown jewels of my signed 1961 Fleer project. Coming in second only to Ted Williams, is this Joe "Ducky" Medwick.  At that Dallas show I went to a month or so back, there was a dealer in autographs.  And not just high end autographs. He had half a dozen 5000 count boxes filled with signed cards (mostly modern, but also vintage) that could be had for less than $10 each. Last year, I had become acquainted with a person who builds signed vintage sets and had signed Fleer cards I needed for my project.  Unfortunately, I never had much luck finding anything he needed other than a couple of my duplicate 1963 Fleer commons.
It was the end of the day in Dallas and my back was starting to seize up (you young 'uns will understand when you cross over to the wrong side of 50,) so I only got through half of the 5000 count boxes. But I found about 8 cards he needed. I also took a look at the star cards he had in a display box and found another card my friend needed.  And with those cards, we started to work out a trade. At first, I thought I might go for a volume, and trade for a number of the lower value needs. But, those cards are lower value because the subject players were prolific signers.  Why trade for something I could pick up off of eBay for less than $30?  So, I ended up trading for this Medwick.  Medwick died in 1975, so there isn't many of these out there. In fact, I think I have only seen one other.
I've blah blah blahed enough.  SABR Biography
What I am listening to: Commercial Rain by Inspiral Carpets
Posted by carlsonjok at 6:20 AM 2 comments: