I'm dang near caught up. Which is good, because I am heading to a card show tomorrow; my first in at least four months.  So, let me knock this off right quick now.  Here is the 16th autographed 1961 Fleer card I have added to my collection: 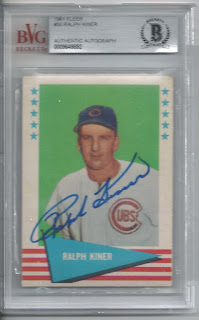 This one set me back the princely sum of $19 delivered, which I consider a bargain for a member of the baseball Hall of Fame.  Kiner's career was cut short, after 10 major league seasons, due to back issues, but was elected to Cooperstown in 1975. He had a long career as a NY Mets radio announcer.  At the time of his death in 2014, he was the last living player featured in the 1960 and 1961 Fleer Baseball Greats sets.  Only 5 other players featured in those sets lived into the 21st centurey (Lou Boudreau, Marty Marion, Bob Feller, Ted Williams, and Eddie Joost.)


What I am listening to: Things Have Changed by Bettye Lavette

Posted by carlsonjok at 10:09 PM No comments:

It's cold outside and I am not interested in going outside and doing anything.  There is plenty to do around here, but I think I'll crank out another post before I go dormant again.

It has been a long time since I added anything to my two player collections: Paul Blair and Johnny Antonelli. I have likely exhausted most of the major issues for both men and am down to the rare oddball/regional issues.  Of course, there are numerous non-licensed cut-auto issues over the last decade.  But, I don't really collect those as they generally don't feature photos and are issued in deliberately low numbers (Artificial scarcity makes my blood boil and is why I gave up collecting modern set issues (I'm looking at you, Heritage!)

But, I continue to keep an eye on EBay in case anything new (to me) pops up for these PCs. A few weeks ago something did: 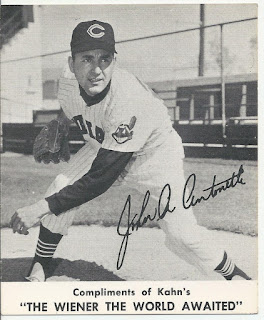 A 1961 Kahn's Wiener Antonelli.  This is considered card #1 in the 43 card set.  The cards aren't actually numbered, as you can see below. But, Antonelli is first when the card subjects are alphabetized.  So, card #1. Kahn's was an Ohio meat company, so this set only features players from the Indians, Reds, and Pirates.  The set features Hall of Famers Bill Mazeroski, Frank Robinson, and Roberto Clemente. 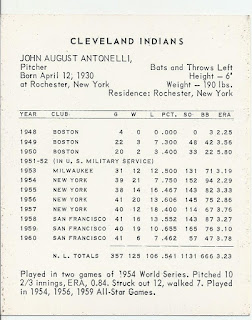 A quick review indicates that this is the 62nd unique Antonelli card in my collection.  That includes a couple Stratomatic cards.

What I am listening to: Corazon Espinado by Santana

Email ThisBlogThis!Share to TwitterShare to FacebookShare to Pinterest
Labels: 1961 Kahn's 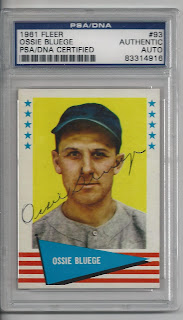 Posted by carlsonjok at 12:38 PM No comments: