A Toe in the Water

As I said in my previous post, I've decided to not leave the hobby behind as I get ready for my upcoming job search. That's the theory anyway.

My observation is that collecting baseball cards is a hobby driven by emotion.  Seriously, can you see a Vulcan engaging in this hobby? Of course not.   But, I have found that emotions run both ways.  Even knowing that I have over 9 months to go and that being out of work doesn't represent an existential financial threat, it has been exceedingly difficult to even open the purse strings.  As an example, I was planning on heading down to the 600 table Dallas card show a few weekends ago to look for some vintage commons and trade bait to use in my autographed Fleer project.  But, my wife's card needed a $1,500 repair and that gave me the reason I was probably unconsciously looking for to not go to the show.

But, here is a recent arrival: 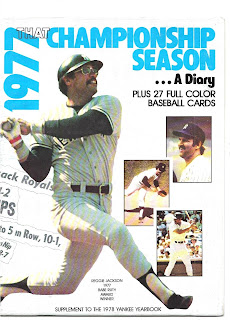 A magazine type supplement to the 1978 Yankees yearbook that I picked up off of eBay for a whopping $16.  While I have the 1978 picture album, I don't have the actual yearbook yet.  It does appear that they can be had for around $20. So, that may be my next big splurge. Anyways, that is the front cover above and this is the back cover below. 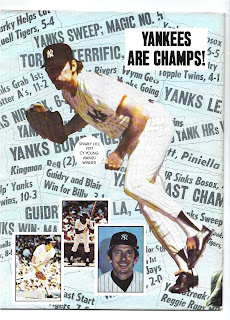 1977 was a exciting year for Yankees fans.  A World Series victory on the back of Reggie Jackson's
3 home run Game 6.  Sparky Lyle's Cy Young win, the first for a relief pitcher. And the emergence of Ron Guidry, who's 16-7, 2.82 rookie season was a foreshadowing of his stellar 1978 season 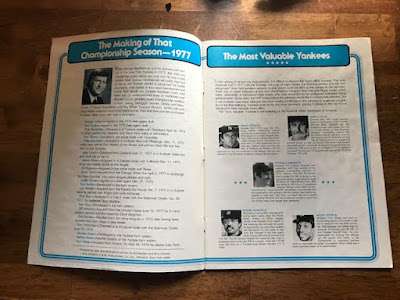 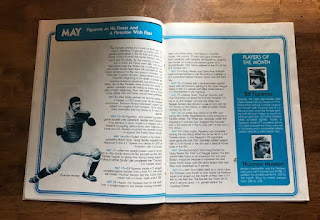 There is a month by month review of the season. 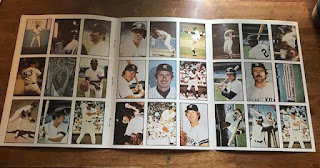 And there is the payoff.  An sheet of 27 trading cards of the key players from that season.  Out of curiosity, I looked to see how many different players appeared for the Yankees in 1977, The answer was 36, so the 26 players shown in these cards represents nearly 3/4 of the total.  For laughs, I looked to see how many players appeared for the Yankees this season, which is only 2/3 over.  The answer is 56, 28 of which were pitchers.
I find myself struggling to follow baseball the last few years, while I concurrently stay up to date on the NBA even in the offseason. I think there may be a clue as to why in the previous paragraph.  The modern baseball team seems to have become a revolving door of players and if you aren't making following the team a major part of your day then you are reduced to rooting for a uniform and not a core group of players that comprise the team year after year.
Anyway, that is my theory. It is also possible I am just a bad fan.
What I am listening to: Down on the Street by The Stooges
Posted by carlsonjok at 6:07 PM 1 comment:

I am 55 years old and I am, in equal parts, nostalgic and cynical.  I watched the Field of Dreams game last night hoping that it would resonate with the former, only to find that it mostly hit the latter.

Don't get me wrong, as hokey as it is, I love the movie. I view it as a spiritual journey allegory,  The main character goes through a series of intellectual crises that lead to him making leaps of faith, with the end result of him reconciling with his father (or, perhaps his Father.)  I am trained as an engineer and, constitutionally, am inclined to analyze any decision as rationally as possible.  So, the character represents something I wish I could be and, to the extent we are dealing with idealization, I want the experience to be through the gauzy focus of nostalgia.  The movie achieves that.

The game did not.  At least not for me.

The root of my objections are twofold. First, MLB leaned too hard into sentimentality and it came off as contrived and antiseptic. Second, the field itself was over engineered. They basically dropped a brand new A ball stadium into a corn field.  So, what specifically annoyed me?

Overall, it was just too corporate. I mean, I get it.  Baseball is a business, but they didn't need to make it that obvious.
Anyways, that is my take.  If you enjoyed the game, I won't judge.  It just wasn't for me.
What I am listening to: One Million Miles by Heart
Posted by carlsonjok at 8:10 AM 4 comments:

There It Is, There It Goes 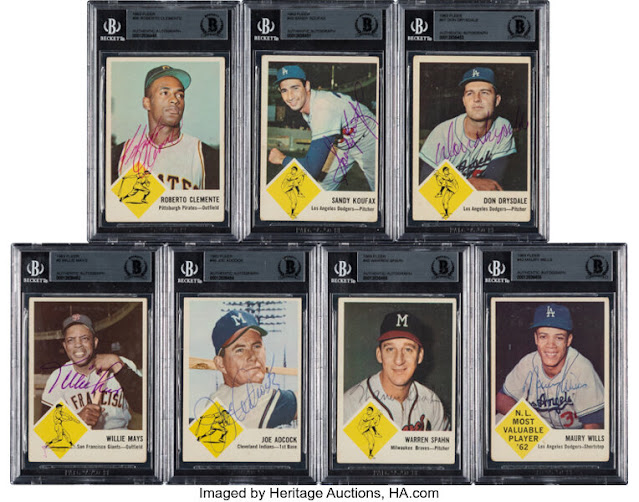 So, to answer the question that is likely on your mind; no, I will not be bidding on this,  The current high bid is nearly $3,500 (with the buyers premium) and the auction has three weeks until it closes.  My guess is that this will go for between $6,000 and $7,000.  That is so far beyond my means that I wouldn't bid even if I wasn't facing a job search in the future.  However, the person who helped me get the 64th and 65th cards for my set also needed Clemente. So, I sent him the link to the auction in case he hadn't seen it. He had and has already bid. So, because he helped me out when he didn't have to, I am hoping he wins.

Speaking of the job search, I don't have any firm date on when I will be leaving this job.  It is supposed to be 6 months after the acquisition closes, but no one knows when that will be. It could be as soon as mid-September, but is more likely to be in the fourth quarter.  So, with a steady paycheck into the April/May timeframe and the ability to get through an extended job search, I've decided I can loosen up and dip a toe or two into the hobby waters.  So far, that decisions hasn't turned into much action.  Though I have one recent acquisition to post about in the next few days.

What I am listening to: Highway to Hell by Tom Morello, Eddie Vedder, and Bruce Springsteen