Hobby activity has slowed down a bit recently.  We are in the midst of our annual spring home improvement period.  This year we are finally breaking down and getting the house resided.  The current siding was in mediocre condition when we bought the farm 15 years ago and it has only gotten worse.  So, it was time.

I have had a few low budget pick ups recently, but I am mainly getting my want lists together.  For years, my show experience has only been the local OKC shows.  Last years trip to the National was my first show outside my home base.  I won't be attending National this year, but like the idea of expanding my show experience. So, the last Saturday in April, I'll be venturing down to the DFW area (Frisco, to be specific) for a good sized show. My main goal will be to make significant progress  on my 1968 and 1970 Topps sets, for which I am 63 and 95 cards, respectively, from completion.

In the mean time, here is a quick little post of a fun little set I found on eBay.  It is a 25 card set (I have 10 at the moment) cataloging the various British Governor Generals of India (also known as Viceroys of India) from 1774 through 1912, the year W.D. & H.O. Wills  issued these cards with their Scissors brand cigarettes.  This set seems such an anachronism today, as Great Britain is on the verge of leaving the European Union, likely putting the final nail in the coffin of the British Empire. 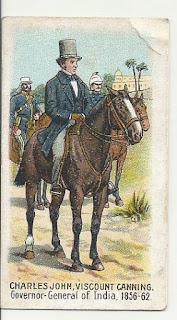 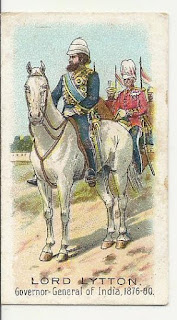 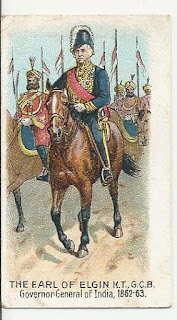 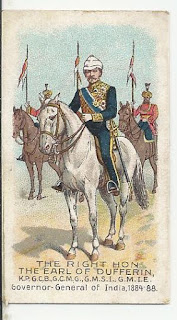 A lot of acronyms there.  For shits and giggles, let's see what they are.

Dude had a lot of titles. I hope he didn't have to pay dues for all those societies.   Frederick Temple Hamilton-Blackwood was reputedly a poor money manager and, later in life, was used as the marketing face of a mining company that was merely a vehicle for fraud by other investors.

Anyways, that's all for now.

What I am listening to: Dead City by Patti Smith 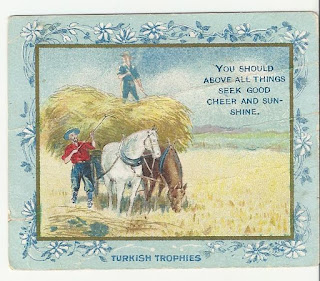 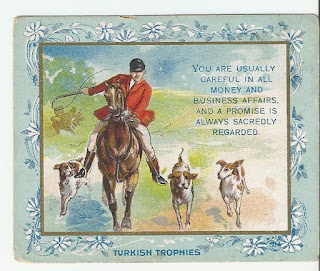 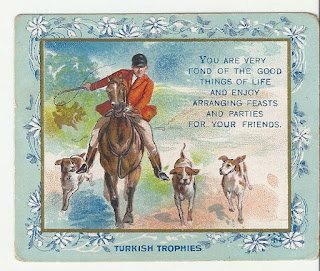 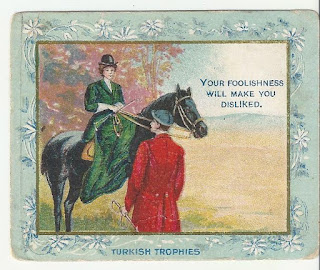 My horse themed card collection has mainly focused on pre-war tobacco cards.  But something came up recently that I just couldn't pass up. Specifically, Western movie star Exhibit cards.  These cards were issued by the Exhibit Supply Company for distribution in arcades.  They are basically the same as the baseball exhibit cards which we all know so well; only differing in the subject. 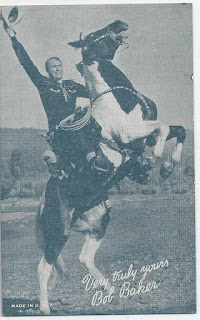 Bob Baker had a fairly short Hollywood career, appearing in 25 westerns between 1937 and 1944. While subsequent to that he made a few appearances as a stuntman, he was mainly a "normal" person holding normal jobs, including a time as a saddle and leather goods maker. 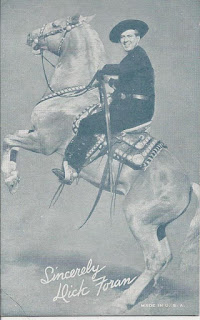 While he did have a few start turns in minor releases, Dick Foran was mainly a supporting actor, often in John Wayne vehicles. He had a fairly long career on the screen, stage, and on television as can be seen in his fairly sizeable filmography on IMDB. 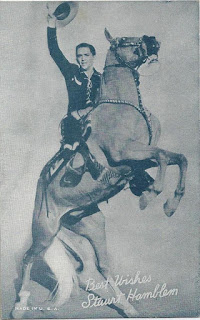 Stuart Hamblen had an even sparser acting career, appearing in only 10 films.  But, he found fame in other areas.  His conversion in a 1963 crusade was considered by Billy Graham as a turning point in the popularity of his ministry. Additionally, Hamblen wrote the oft recorded popular song, This Ole House, and the gospel song "It Is No Secret." I was surprised to find that I have two versions of This Ole House in my music library, a swing arrangement by The Brian Setzer Orchestra and a more traditional country version by Loretta Lynn.  However, the first and probably most iconic version was by Rosemary Clooney. 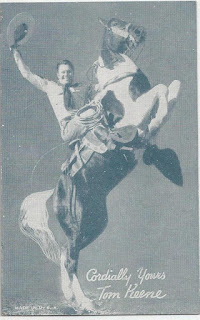 Tom Keene was born George Duryea in my hometown of Rochester, NY.  He had a very long
film and TV career, starting in 1928 and continued through 1960, ending with 6 guest appearances on Ozzie and Harriet.  Alas, his final appearance on the big screen was in the delightfully horrible Ed Wood turn "Plan 9 from Outer Space." 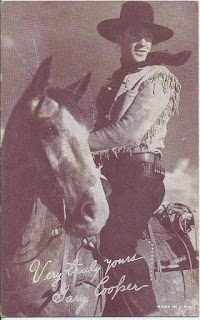 Gary Cooper. Do I really need to say more?  Of course not.  Y'all know Gary Cooper.  Everyone has seen High Noon, right?  And, by God, you must have seen Pride of the Yankees, where he plays Lou Gehrig. 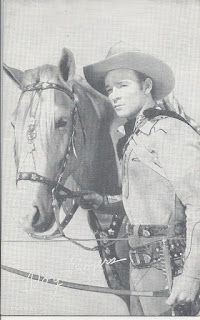 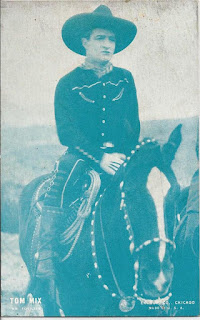 There is a town north of Oklahoma City called Guthrie.  It was the original capitol of Oklahoma Territory and, upon statehood in 1907, was the first state capitol.  The capitol moved to Oklahoma City in 1910 and Guthrie reverted to a sleepy rural town and (Logan) county seat.  Coincident with that time a bar known as the Blue Belle sat at the corner of Harrison and 2nd St. It has existed, in various incarnations but not exactly continuously, to today (it is a Mexican restaurant at the moment).  But, during the territorial days one of the persons tending bar was, prior to his movie career, Tom Mix. He also found work at the Miller Brothers 101 Ranch, which is the subject of the wonderful Michael Wallis book "The Real Wild West."

He was a prolific actor in silent films and did appear in some talkies, clocking up a IMDB filmography with 281 entries. 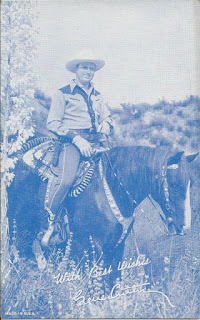 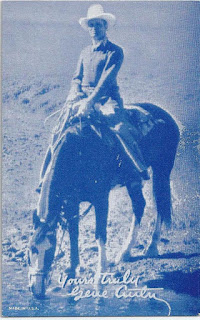 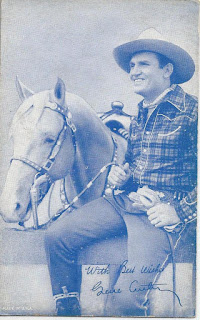 There is little I could write that would do justice to Gene Autry's life.  While no one would confuse him for Michelangelo, he is, in his own way, a Renaissance man.  Seriously, go read his biography on Wikipedia. I will note two things:

What I am listening to:  This Ole House by Rosemary Clooney.