I hate trading.  Not really, but kinda. A month or so ago I found a 1963 Johnny Podres in a dollar box and sent it off to Night Owl.  No reason other than as a thank you for all the reading pleasure his various blogs give me.  Once the envelope is dropped in the mail, I forget about it.    But, a bit later a bubble mailer shows up with a bunch of nice cards.  Too many nice cards given that I only spent a dollar and a stamp on what I sent you. 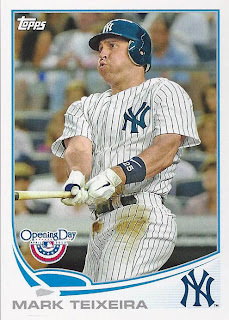 I know NO doesn't like Mark Teixeira, but I do. His production has been down the last three years, but I am not convinced that it is an age-related decline.  His power numbers remain good. I think the drop off may have to do with more teams playing Tex, a dead pull hitter, in a shift. Consequently, less hits are getting through the right side of the infield.  That said, it still isn't clear NY is getting their money's worth out of the big contract that gave him. 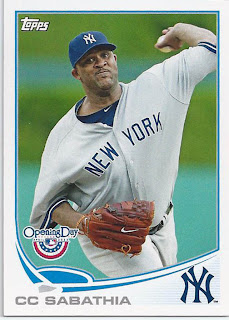 Speaking of big contracts, CC got one last year and I am afraid it may end up being an albatross before too long. Last year, CC looked less  dominant.  His pitch speed is down and he took a couple trips to the disabled list.  He is still a great pitcher, by virtue of his great control and ability to eat innings.  But, it isn't clear that he is going to pay back his large contract for many more years. 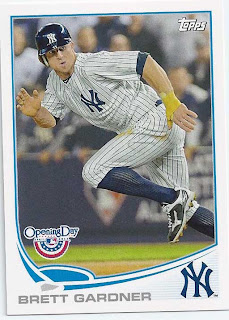 I love Brett Gardner.  Not much power, but a solid leadoff man and baserunner.  Plus, he is a Gold Glove caliber outfielder.  He has been playing centerfield while Curtis Granderson has been on the DL. I am hoping they leave him there when Grandy comes back.  Curtis, another favorite, just looked lost in CF last year.  I can't count how many times he started in on a flyball and had to stop short and head back in the opposite direction in a hurry.  Gardner is just a more natural center fielder. 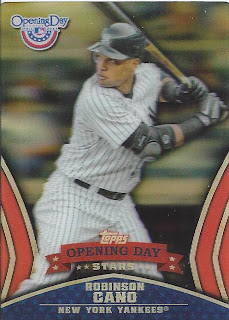 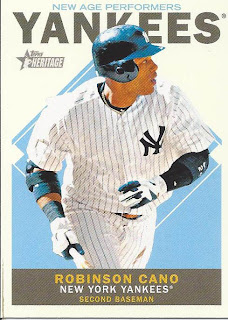 Ah, two Robbie Canos.  The heart of the Yankee team the last few years.  Robbie stands to cash in big this coming off-season as he hits free agency.  I expect he'll re-up with NYY before then, but I expect that it will come with a big payday. I am fine with the Yankees giving him a big check, but for goodness sake, don't sign him for more than 5-6 years.  Learn from that lousy contract you gave Alex Rodriguez. You know, the one you'll be paying through 2017. 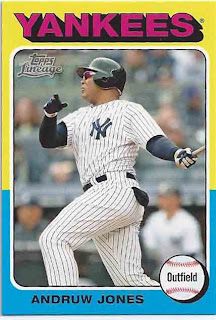 I believe Andruw is now in Japan.  He did well for the Yanks in 2011. Not so much in 2012.  Although, even at his worst in pinstripes, he was still better than he was during his mercifully short stint with the Dodgers. Hoo-boy! 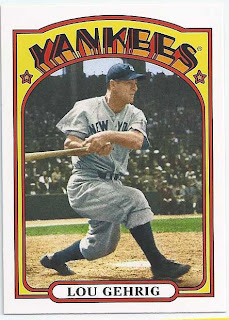 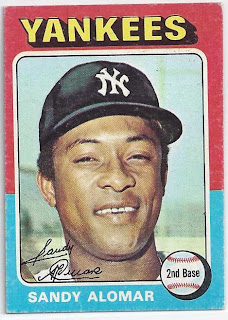 My second one. The first was Paul Blair which is part of my Blair player collection.  I don't think I'll ever try to put the set together. I once asked my local LCS if he had any '75 minis and he did not.  I would imagine it would be well nigh impossible to complete the set and that would frustrate me to no end.  But, I sure do like this card and it will take a place of honor in my vintage/mojo binder.

Thanks Night Owl!
Posted by carlsonjok at 8:11 PM 3 comments: 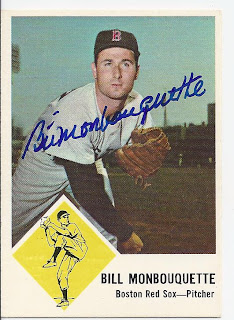 Posted by carlsonjok at 5:47 PM No comments:


Yes, I am weak. But, you knew that already.

I left home today in search of an Uwe von Schamann autograph for a friend and planned ahead by taking two of my want lists (1971 Topps and 1960s Fleer) in case I came across any of the 6 remaining 1971s, or two remaining 1963 Fleers, I need to complete the respective sets.  I didn't find any of either, but I still managed to buy some cards. I didn't spend all that much though, so I forgive myself. 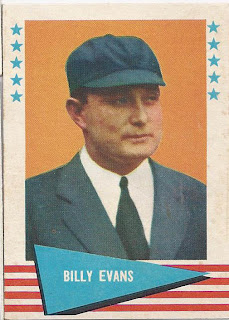 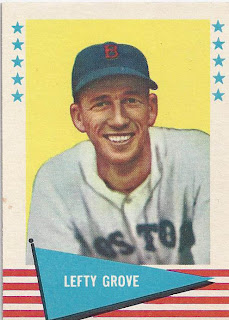 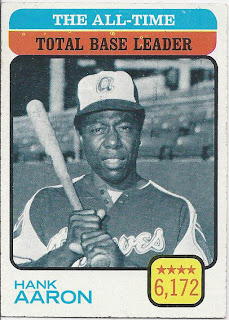 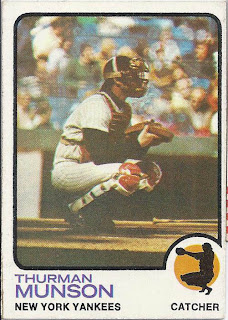 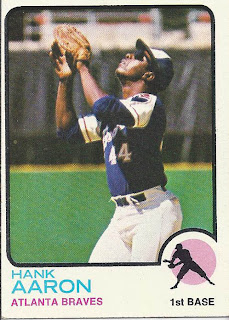 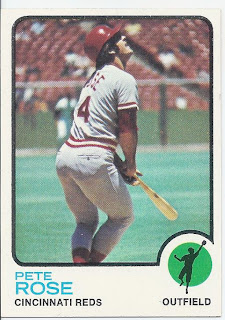 I used to get all the commons up front when building a set and leave the stars to the end.  That proved to be frustrating as I sat at "almost complete", but still had the most expensive cards yet to go  I tend to really get driven when the end gets near, and I found myself overpaying for those star cards.  With 1973, I have a lot of the star cards, lacking only Nolan Ryan, Willie Mays, the Goose Gossage rookie card, and the John Hilton rookie card (the most expensive card in the set a a $150 book value)  I am thinking that an approach where I picks up stars as I find them is better since it is a heck of a lot cheaper to overpay for commons than stars at theend.

So, that is it for now, I suppose.  With these cards above, I officially spent my wad for the month.  Completion of 1971 will need to wait until May now.


My wife and I went to the Oklahoma Redhawks game against the Memphis Redbirds last night.  It wasn't actually opening day. That was the previous night.  But, since we both work in downtown OKC, going to opening night would have meant at least one of us would have to drive the 30 miles home to take care of the horses and dogs, then drive all the way back downtown.  After a long week, that wasn't happening. So we went on Saturday, instead.

The Redhawks lost 8-7, but it started out worse than that implies.  The local boys were down 8 to 1 after three innings but clawed back to 7 runs at game end.  This included a 3 run 8th inning, which I missed since we chose to leave after the 7th inning because it was getting late. 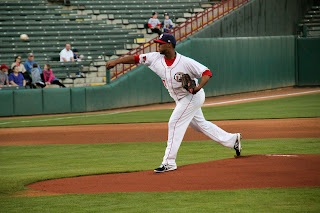 This Redhawks starting pitcher Jose Cisnero, who got totally battered around. He had a hard time finding the strike zone and when he did the Redbirds really teed off on him.  It was ugly and his day mercifully ended with 2 out and the bases loaded in the top of the third. 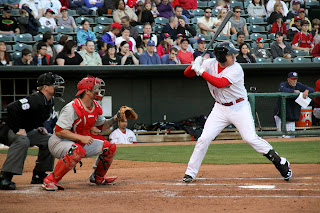 This is former Yankee farm hand Brandon Laird, now banished to the Astros chain.  This was taken in the bottom of the first, and on the next pitch after this one he laced a double to left-center that scored the games first run.  Later in the game, he hit a solid home run to left to drive in the Redhawks second run of the game. 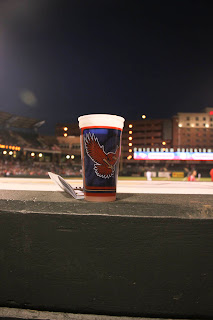 So, I am going to go to the card show today, but not for myself.  The show includes an autograph signing by OU and NFL football great Uwe von Schamann.  He is a legend here for "The Kick," the game winning 41 yard field goal in a 1977 game in Columbus between OU and Ohio State.  My wife (an Ohio State grad) has a friend and former co-worker who is a huge (and I mean HUGE) Ohio State fan.  So, my task today is to get an appropriately autographed photo of "The Kick" for the friend.  I may take a little money and look for myself, but I will probably only use it if I can find any of the remaining cards I need for my 1971 set.


I blew a large part of my card budget recently on a autographed 1963 Fleer card of Dick Hower.  There is a card show this weekend, which I probably will skip since a good portion of the remaining budget was spent on this card: 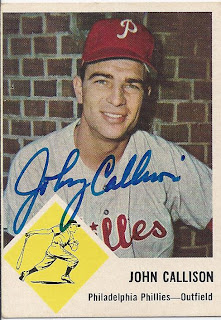 John Callison is my 20th 1963 Fleer autographed card, and the third of a deceased player.  This card came out between the first and second years of a solid 4 year stretch in his career where he rang up a WAR of 6.0 or higher and made the NL All Star team three times.  Although he lived in the Philadelphia area after retirement, he originally hailed from Qualls, Oklahoma, a small town near Lake Tenkiller and west of Muskogee.

Added in Edit:  I don't know how this escaped me, but I actually needed this card for building the set. I must be losing it. In any event, I am down to needing two cards to finish the set:  Don Drysdale (#41) and Ken Boyer (#60).
Posted by carlsonjok at 5:00 PM No comments: 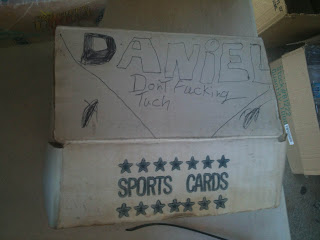 I was at a show a few months back and came across this at one of the seller's tables.  I didn't have a little brother myself, so I found this hilarious.  YMMV.
Posted by carlsonjok at 3:50 PM 2 comments:

Email ThisBlogThis!Share to TwitterShare to FacebookShare to Pinterest
Labels: Humor, Off topic

Not likely. Not if I keep doing this: 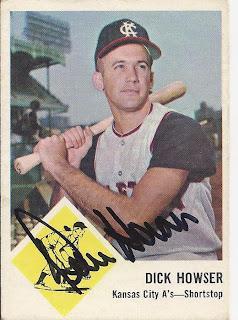 I pretty much shot half my card budget for the month on this single card.  Why?  Because I actually needed a Dick Howser card to finish my 1963 Fleer set and, since Howser passed away almost 26 years ago, it is unlikely I'll come across another one of these autographed any time soon.

Posted by carlsonjok at 4:30 PM No comments: