I think I may have an attention problem. My collecting goes in phases. I'll go whole hog on one part of my collection and then, later, drop it and move on to something else.  At the end of 2020 and in January, I was working on my 1960 and 1965 sets. I even went to a really large show down in Dallas with the intent of moving them much closer to completion. In a sense, I did. I picked up a fair number of commons, along with a few minor stars for those sets.  But, I still lack a fair number of major cards for both sets and the prices that were being asked for those cards were well beyond what I consider reasonable.

Now, I get that the market has moved over the last year and perhaps my criteria needs to be updated. But, even though I have been saying this for quite a while, I do think we are in a bubble, albeit one with some staying power.  I am 32 cards from finishing 1960 and 44 from finishing 1965. Of those, 8 and 12  are major star cards, respectively. So, those two sets may soon join 1968 on the "not quite complete, but waiting for the bubble to pop" shelf.

In the mean time, after I snagged one of the last signed 1963 Fleer cards I needed at Clean Sweep Auctions, I noticed that there was a huge lot of signed 1961 Fleer cards up for auction.  I am talking about a 46 card lot, with 20 cards I still needed. So, I figured out what those 20 needs would have set me back at eBay market rates and decided to bid up to that level.  It would have been my largest single hobby purchase.  Except, I misread the auction closing rules and couldn't bid.  It would take a while to explain the bidding rules, but suffice it to say this is the only auction where I have ever seen those rules.

Anyways, the lot finished right at where my maximum bid was. Which means I probably would have lost anyways.  But, it did get me to start looking beyond eBay.  As luck would have it, a 5 card lot of signed 1961 Fleers was up for auction at Heritage. I only needed 3 of the 5, so I determined what the market rate was for only the three I needed and set that as my maximum bid.  This time I made sure to understand the auction rules and placed my bid. And I won. Here are the three I needed for my signed 1961 Fleer project. 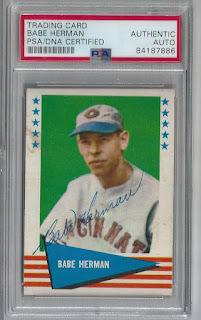 Babe Herman, a native of Buffalo NY, had a 13 year major league career, most with the Brooklyn Robins.  The bulk of his MLB career was between 1926 and 1937, with a short stint back in Brooklyn in 1945. The interregnum was spent playing with the Hollywood Stars of the Pacific Coast League, then considered something of a West Coast quasi-major league. As always, SABR has a biography of Babe that does justice to the man. Read it. He is a fascinating character. I learned from it that he was actually the scout that originally signed my favorite player, Paul Blair, to a professional contract. 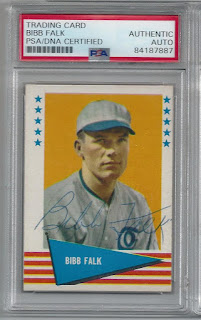 Bibb Falk played a 12 year career, 9 with the Chicago White Sox and 3 with Cleveland. He was a prime beneficiary of the Black Sox Scandal, as the ensuing suspensions opened up the opportunity for him to start his major league career in 1921 as Joe Jackson's replacement in left field. He was a solid, if not powerful contact hitter, with a .314 career average and no single season lower than .285.  In a typical 162 game season, he would strike out only 33 times.  Once again, there is a great SABR biography. 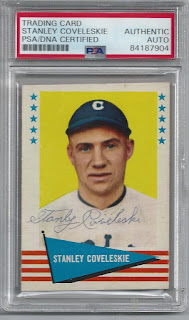 Finally, the only Hall of Famer in the group.   After a 5 game cup of coffee with the Philadelphia Athletics in 1912, he kicked of a 13 year run in the majors in 1916.  He was a spitballer that was able to continue throwing the pitch after it was outlawed in 1920.  In what may have been his finest year, his 1918 season comes in at 9.9 Wins Above Replacement, only slightly behind the great Walter Johnson (10.4). No position player exceeded 6.8 in the season (George Sisler.)  He was voted into Cooperstown by the Veteran's Committee in 1969.  And, saving you from my tortured prose, you can find his biography at SABR.
What I am listening to: The Rumble by Chick Corea and Steve Vai
Posted by carlsonjok at 7:33 AM 1 comment: 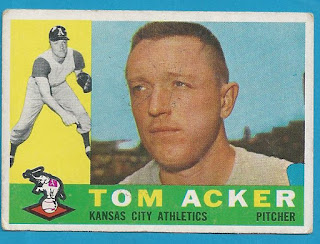 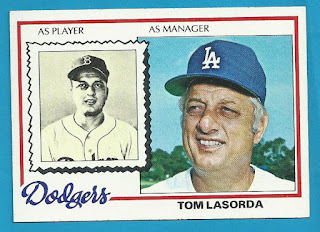 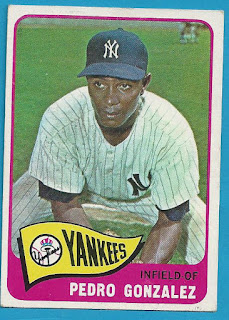 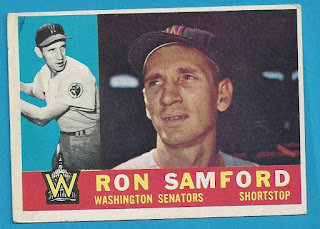 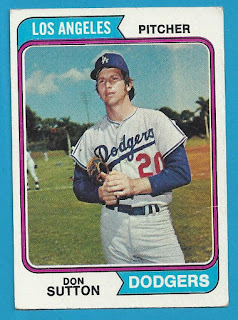 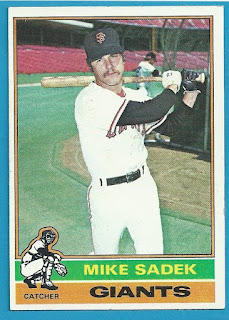 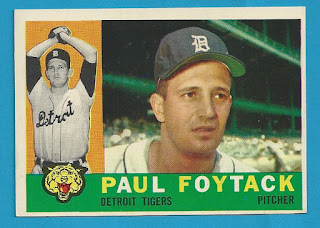 Posted by carlsonjok at 7:32 AM No comments: