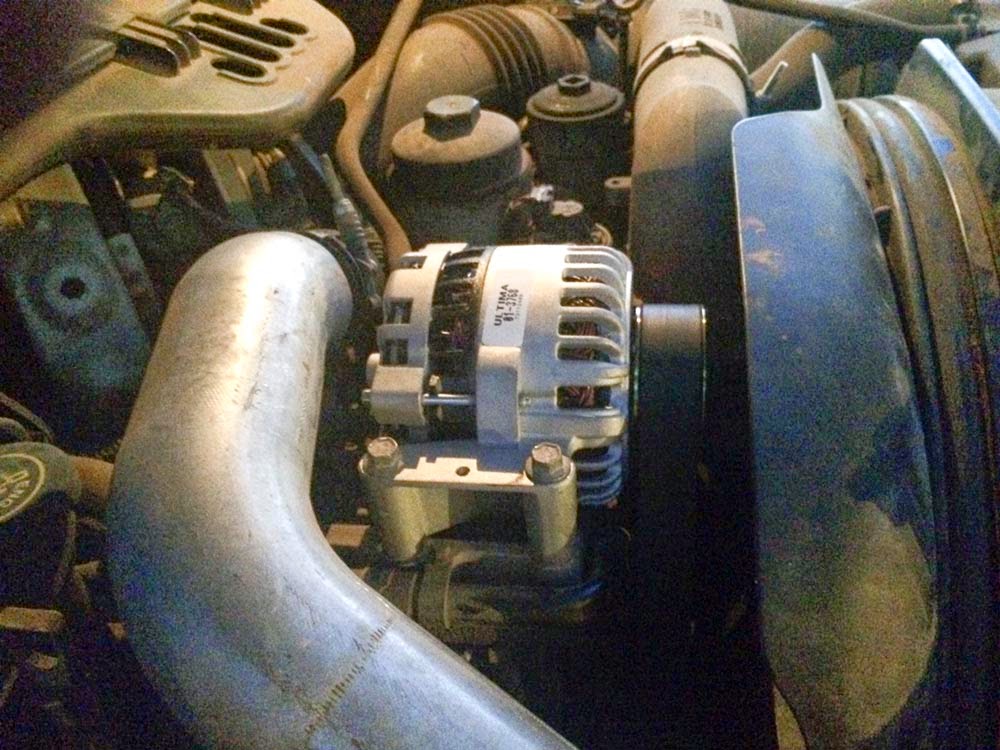 I have been having problems recently where every time there is damp weather, the batteries on the truck drain and it has to be jump started.  I finally took it into O'Reilly's and had the batteries tested.  The batteries, as it turns out, were fine, but the voltage regulator on the alternator was shot.  But, rather than take it in to the repair shop and spend $500-$600 to get the alternator replaced, I plunked down $175 for a new alternator and did the repair myself.  It took some time to actually figure out how get the tension off the drive belt, but once I did replacing the alternator was a 10 minute task.  So, after having saved myself $300-$400 dollars, a opportunity presented itself to put that money to good use.

This all happened amongst my renewed interest in working on my autographed 1963 Fleer set, Iand the opportunity was right in that wheelhouse.  Off the card went.  Today, after nearly two months my shipment was on it's way back to me.  Alas, this is what greeted me: 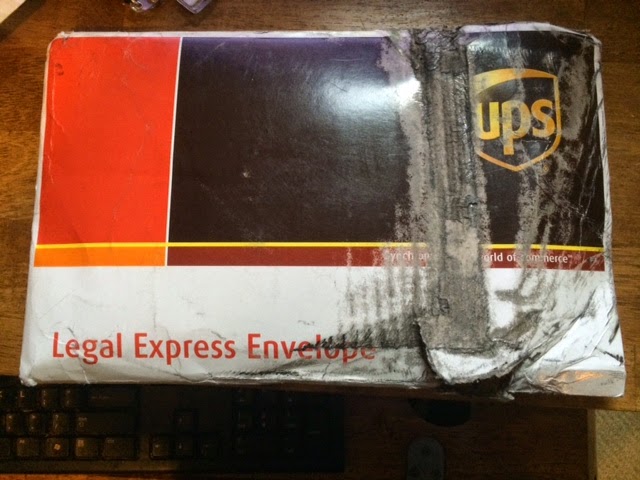 After I restarted my heart, I opened it up and found that the consigner had packaged my card well and it was in perfect condition.  So, without further ado, after the jump is the 44th autographed card in my 1963 Fleer set:

I went to a card show today for the first time in months.  Here is a picture of my haul. 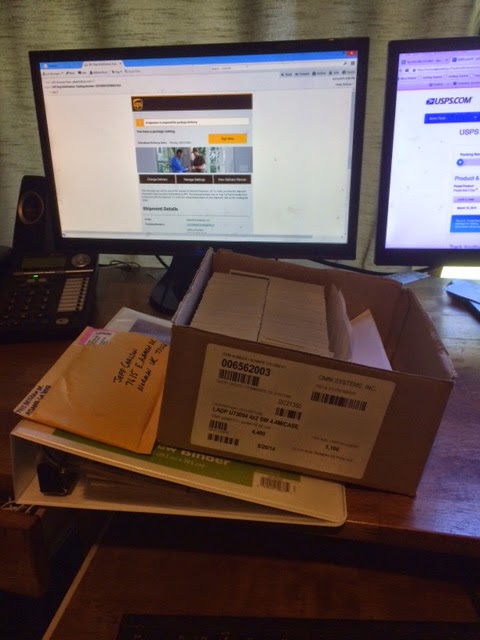 A sharp eyed observer may not that there are some other things in that picture and may guess there is some foreshadowing going on. They would be correct.    The bubble mailer is a trade pack.  The UPS email is the tracking for something I am super excited about: the crown jewel of my 1963 Fleer autographed set.

Alas, the UPS screen on the right is not good news. I sent two 1963 Fleer cards in to consigners at SportsCollectors.net for signings. The screen is supposed to be tracking for a return shipment.  There is no tracking and it gets worse from there.  But, more about that later.


Posted by carlsonjok at 2:26 PM No comments: 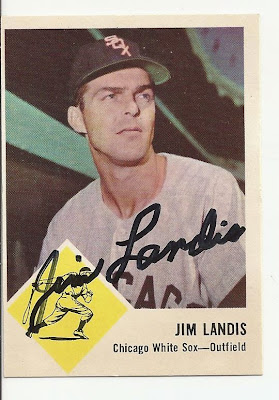 For the life of me, I cannot remember what I wrote in the letter I sent to Jim Landis with the TTM request. I had it written down, but cannot find the sheet of paper.  I am too tired to look for it.  Sorry.  It will have to suffice to say this the final card back out of the second set of three cards I sent out.  I still have one out from the first set of 4, 3 others out for other signings, and one more going out tomorrow.
Posted by carlsonjok at 6:02 PM No comments:

This arrived on Saturday.  My forty-second autographed 1963 Fleer trading card. 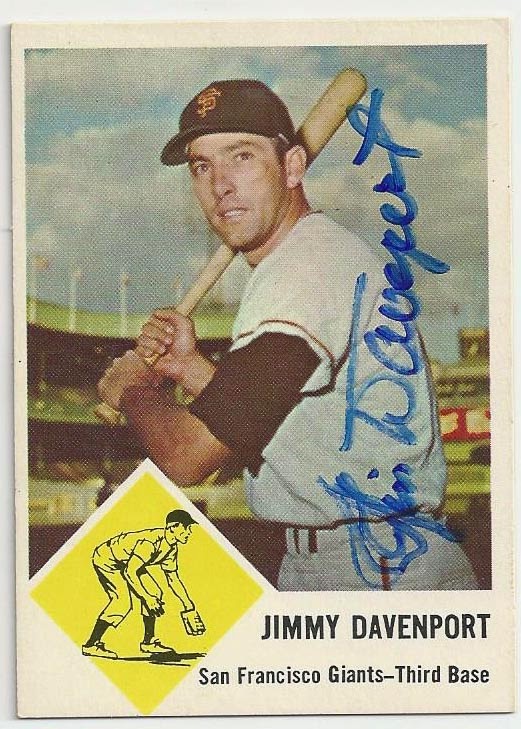 Davenport had a 13 year career, all with the Giants, from 1958 through 1970.  So, what was the part of his career I chose to highlight in the letter that accompanied the TTM request?  While he was always rated above replacement level, I am not sure he could be considered an offensive powerhouse. Jim Davenport, nonetheless, hit Sandy Koufax really well. In 62 career at bats (73 plate appearances,) he had a triple slash line against Koufax of .290/.380/.500, which included 4 home runs.  Compare that against career marks of .258/.318/.367.

What I am listening to: Sitting on Top of the World by Willie Nelson and Asleep at the Wheel.

Posted by carlsonjok at 6:32 AM No comments:

I had a bit of a dry spell on this project the last few weeks. I did get this card back on Wednesday. 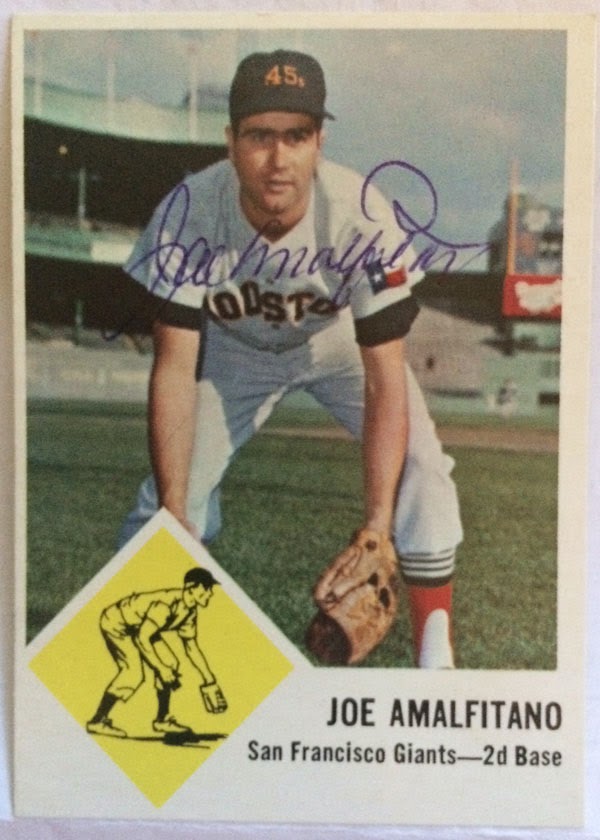 My research into Amalfitano's career turned up something interesting about his early career.  In his first season in the majors (1954), he made 9 appearances; 6 as a pinch runner.  In the other three appearances, he managed 5 plate appearances which resulted in 4 strikeouts and no hits.  The following season, he was on the Giants roster all season.  However, through August 7, he had made only 24 appearances, of which 21 were as a pinch runner.  However, he had what must have been a rookie thrill on August 7th, in the second game of a doubleheader against Cincinnati. He entered the game in the middle of the first, subbing in for starting shortstop, Al Dark.  The game was mostly uneventful for him until the seventh inning when he got his first MLB hit,  a single off Jackie Collum. He was out on a fielders choice the next batter.  In the top of the 9th inning, with the score tied at 5-5,he hit a double off Gerry Staley. He advanced to third on a sacrifice bunt by Whitey Lockman, and scored what turned out to be the winning run on a sacrifice fly by Willie Mays.

What was neat about this TTM is that Amalfitano returned my letter and had written on it that he remembers that day.  I have wondered if the people I send these cards to actually read the letter. In this particular case, he did.

As it stands, I still have 6 cards out for signature (3 TTM and 3 public signings). I have another going out this weekend.  Hopefully, I'll have more back soon!

What I am listening to:  Factory Girl by The Chieftains with Sinéad O'Connor

I decided to go back and give you an update on a recent pickup of mine:


I know it isn't baseball cards, but it just tickles me to death.  I have 17 acres and my neighbor to the north has 40. I can let two of my dogs run, as they will go off exploring but come back after a while.  I have one dog, a Great Pyrenees-Anatolian Shepherd mix that I cannot let run, as he doesn't come back.  But, he has the Great Pyrenees desire for a territory to patrol.  So, I try to take him for walks on my, and my neighbors, property.  Today, Daisy the barn cat came with us.  Buddy wasn't happy since I wasn't going to take anything other than the shortest loop with a cat in tow, but he'll get over it.
Posted by carlsonjok at 6:16 PM No comments:

Email ThisBlogThis!Share to TwitterShare to FacebookShare to Pinterest
Labels: Every Dog Has His Day, Off topic, Weird
Newer Posts Older Posts Home
Subscribe to: Posts (Atom)