It has been almost a month since my last post.  Much has happened since then. I led that post off with the story of my sweet senior dog, Missy.  Unfortunately, we lost Missy two weeks later. It was mercifully quick.  On a Thursday night, she was her normal self.  Friday morning, it was clear she was in some distress.  She fought hard, but it was quickly clear it was time to let her go.  I miss her terribly, but she lived a long life (16 to 18 years), was happy until the end, and didn't leave anything on the table. You can't ask for more than that, can you?  I posted a tribute to her on Twitter (borrowing heavily from Robert Burns): 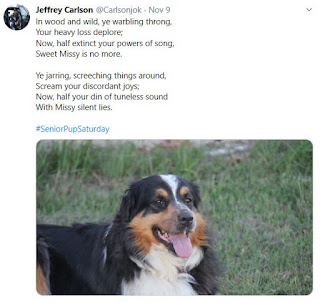 She'll be impossible to replace, but God help me, I'm already watching the adoption page at the Norman Animal Shelter and expect it is only a brief matter of time before the pack is back up to its full staffing level.

I finally managed to get down to Dallas for one of the shows down there after threatening to do so since the beginning of the year. It was a 2 1/2 hour drive, but it was very easy, with all but the first 10 miles, and the last 200 yards, of the drive on I-35.  It was worth the drive with the show being at least 3 to 4 times the size of the every-other-month OKC show.  Overall, it was a good experience.  I found several vintage sellers who were pricing in the same range as I have come to expect locally. For later reference, I normally expect to pay between 30% and 50% of Beckett high book for cards in the range of EX+ to EX/NM condition.  My checklists always have book value so that I can track my expected cost and keep me in line with my show budget.

I had only one bad experience.  My main goal was to make progress on my 1968 and 1970 sets, which were within striking distance of completion.  At one seller, I found 3 cards I needed:two 1968 commons and a 1968 Hank Aaron All-Star card. They had a total book value of $38, so my expected price was in the range of $12 to $15.  Oh, was I mistaken.  There were a couple of warning signs I should have heeded:


He asked for $75, nearly twice high book and over five times what I would normally expect to pay for those cards. I was shocked nearly speechless. I told him "I think I'll pass" and walked away.  There is no way I was about to pay graded prices on raw cards, particularly since they were, at best, EX condition and not even NM-MT.  I probably should have told him why I was walking away, but there was a huge room to explore and I suspect that a guy who's that out of touch with the market wouldn't really appreciate the feedback.

Luckily, other sellers were more reasonable and I ended up buying at five different tables, including Roger Neufeldt, who is based right here in Norman, but hasn't done local shows since a new promoter would only give him a less-than-acceptable table locations off the actual show floor.  So, I travelled over 100 miles to buy from a guy that is just down the road.

Anyways, I ended up bring home just over 100 cards. Here is a sneak peak: 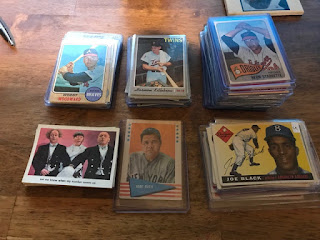 It was a productive show where I managed to finish one set and get myself into the home stretch on two more.  Stay tuned.

What I am listening to: Have Yourself A Merry Little Christmas by Darius Rucker

PS: Be aware, my Twitter account posted above has little to no hobby content.  It is mainly contemporary politics, so I'd advise to only follow at your own risk.
Posted by carlsonjok at 5:20 AM 2 comments: