And Then There Was One, Part 2


So, now I find myself one card away from completing a second set. 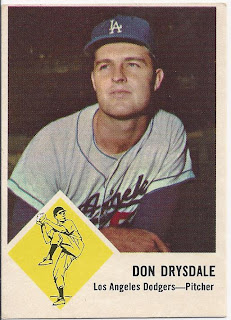 With this Don Drysdale, I only need one more card to finish my 1963 Fleer set.  That card is number 60, Ken Boyer.

Alas, I am still one card away from finishing my 1971 Topps set, since I still have not been able to find a reasonably priced copy of the the Al Hrabosky rookie card.
Posted by carlsonjok at 2:04 PM No comments:

Email ThisBlogThis!Share to TwitterShare to FacebookShare to Pinterest
Labels: 1963 Fleer 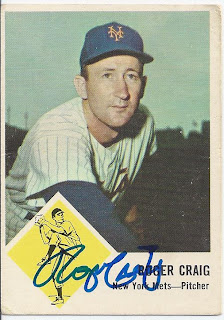 Posted by carlsonjok at 4:44 PM No comments:

As I mentioned previously, I had traded with Cory over at Rectangle Men. I sent off my 1976 Topps duplicates and he sent back a large stack of cards from 2003 Topps All-Time Fan Favorites, a set that I have wanted to put together. Indeed, he sent me around 50 cards, a third of the set.  So, I am pretty far along with one bubble mailer.

I am not sure when I will get to working on the rest of the set.  I recently bought a 5 acre lot next to me and I have to do a large amount of work to make it safe to use a pasture. So, a fair amount of dinero will be going towards that for most of the rest of the year.  What little I have left for cards will probably go towards the vintage sets I have in process. Hopefully, this coming winter, I will loop back around and work on this.

In any case, I was trying to decide which cards to show (cuz that is what we do) and I decided to show those where I have the  actual vintage card it is based on and determine which I liked better.  But first there is something I want to get out of the way. 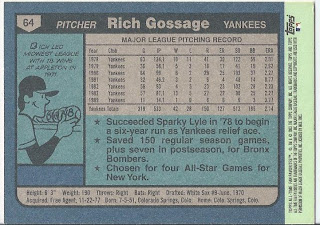 I understand that they don't want to issue an exact duplicate card. Thus, different pictures on the front.  But, I am not down with the way they chose to put career statistics on the back.  Specifically, I don't like that they chose to only show the players statistics with one team.  I would have preferred full career statistics.  Maybe it is just me, but I prefer to study the great players entire career.  But, that minor quibble aside, let's get to the cards! 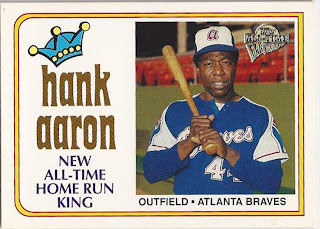 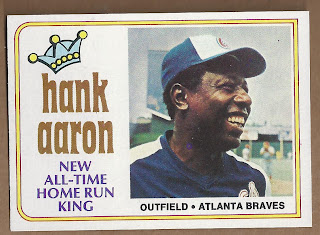 In this case, I prefer the actual vintage card, the 1974 Hank Aaron Home Run King card, although it wasn't a fair comparison.  The 1974 version was probably the most valuable card I owned as a child collector and, thus, is still among my favorite cards of all time.  Sorry, modern Hank. 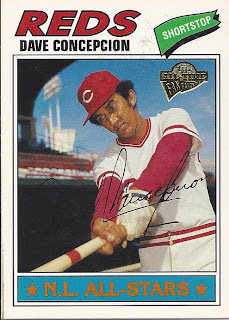 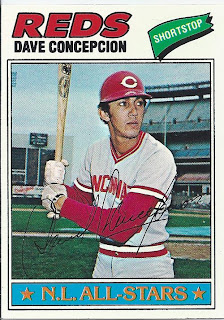 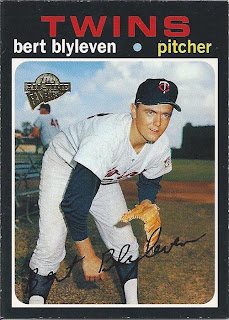 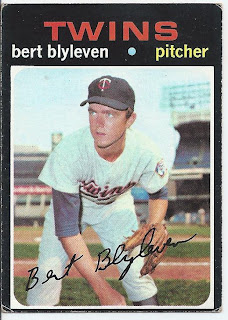 Toss up. Ole Bert is looking pretty creepy in both pictures, although the 2003 Bert is 1-2% less creepy. 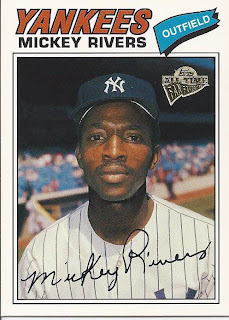 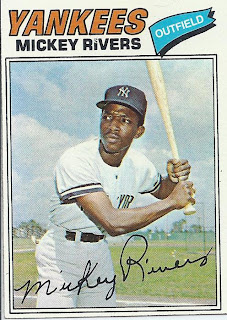 I prefer the 2003 Mickey Rivers as he is wearing the home pinstripes and the photo os taken at Yankee Stadium rather than at Spring Training. 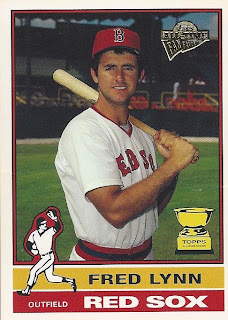 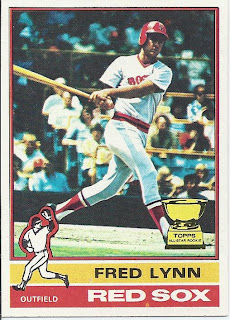 Have to give the nod to 1976 Fred Lynn since it is an action shot. 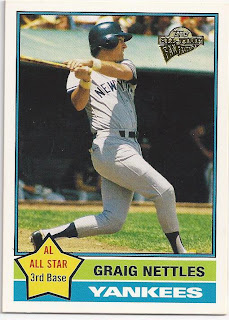 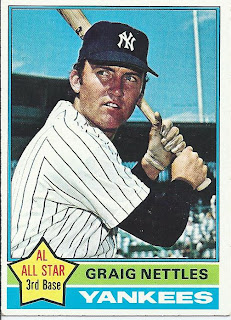 2003 Craig Nettles wins versus 1976 although it was close.  The action shot is better than a posed shot in the home uniform. 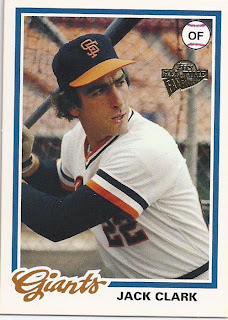 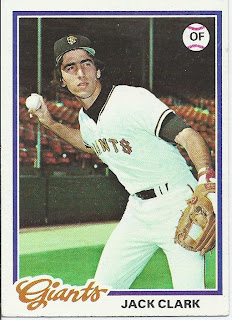 Is it just me or does 1978 Jack Clark look a little bit like Tim Lincecum?  Anyways, 78 Clark gets the win here.  Posed batting pictures are kinda cliche, whereas posed fielding are somewhat novel.

So, I hope no one has been waiting a week in anticipation for this post.  It is pretty poor. Certainly, Cory's generosity deserves a better effort, but I am busier than a one armed paper hanger.  Work has been crazy and spring has finally arrived in force here and the yard work has multiplied exponentially since last weekend.  I am off to change the oil, filter, and blades on my lawnower.
Posted by carlsonjok at 12:17 PM 2 comments:

And Then There Was One

I bought my first cards towards my 1971 set on August 17, 2011.  Over the last month or so, I have been trying to pick up the remaining cards I needed cheaply, mainly off of Ebay. My criteria was that if I can get a decent card delivered for half to 2/3 of Beckett book, I'll go for it.  And I had some good luck. 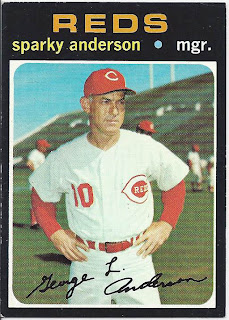 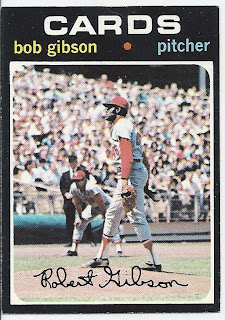 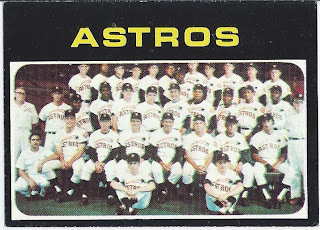 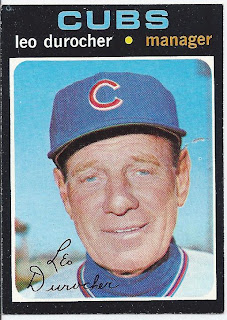 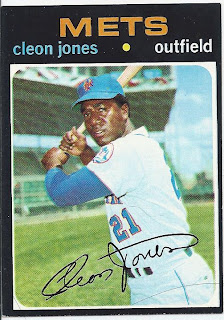 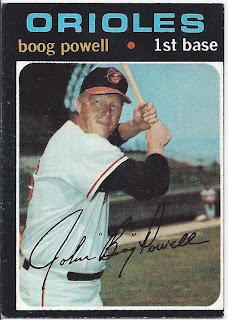 Earlier in the set building process, I probably would have passed on this Boog because of the centering.  However, my stated desire for my 71s is to have some black all the way around.  And, by God, there is the thinnest line of black on the right side, so I pulled the trigger on it.

I am now down to needing one card, number 594, which is the Cardinals Rookie Stars card (Bob Chlupsa/Bob Stinson/Al Hrabosky.)  Unfortunately, I have been quite unable to find an affordable, quality version of that card.  It has a Beckett book value of $6 and it seems to sell for $9 or better in NRMT condition.  Even cards in VG condition seem to end up closing at $4-$6 delivered.  I'm sorry but I am not that desperate. Yet.

Anyone have that card in EX+ condition or better that you would be willing to trade?


It seems like it has been a while since I added anything to my Paul Blair player collection. 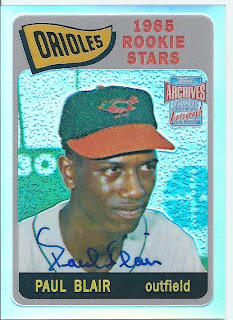 I am not sure why it took my so long to add this to my collection, as they seem to come up on EBay with some degree of frequency.  I do recall trying to trade for it on the Diamond Giveaway site back in 2011, without success.  Anyways, it is mine now. It is the 97th unique card in this particular player collection and the 29th with an auto.

A couple days ago I got a big trade pack in the mail from Cory over at Rectangle Men. I really should have posted about it by now, but I have stuggled to figure out how to make it interesting. I think I have my angle, but I have a full weekend planned and probably won't get it published until mid next week. Hopefully, it will be worth the wait.

Oh, that big weekend? I am driving up to Kansas City to see the Royals-Yankees game on Sunday!
Posted by carlsonjok at 7:00 PM No comments: 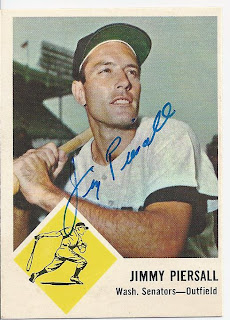 Posted by carlsonjok at 3:00 PM No comments: 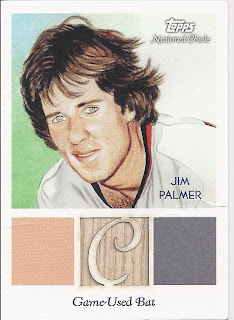 Thank you!
Posted by carlsonjok at 3:00 PM No comments:


I went up to the monthly mini-show at Al's Sports Cards in Edmond today. I wasn't going to buy, but rather to check in on Bill, the seller from Wichita, who has been having some health issues.  He is doing good and we made tenative plans to get together for lunch while he is in OKC for treatment.   I took a quick look around and saw that one dealer, who usually has decent vintage selection had a "15 for $1.00" box. I thought I'd take a quick look. I am glad I did.  It was, for the most part, modern cards (1990s to present) that he probably took in as part of a purchase of more valuable cards.  But, I did find something that interested me. 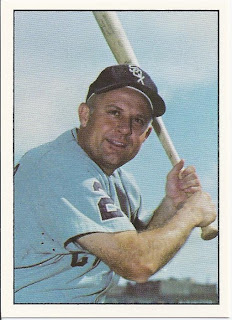 This is card #1 of the 296 card (including variations) TCMA The 1960's set, printed in 1978.  But, I found more than just Smokey Burgess here.  Indeed, I ended up getting 255 cards from the set for a grand total of $15. They are all in NRMT/MT condition, which is pretty cool considering they are 35 years old.

I didn't sort through them at the show. I just took the whole bunch, figuring that I could probably find a home for any duplicates. However, I was quite pleased to find, when I got home, that I had 255 unique cards.  Not a single duplicate. Not surprisingly, they are all commons, the likely detritus of a set being broken up to separate out the star cards.

I really like these cards. They have something of a 1953 Bowman feel on the front.  And appreciate the fact that it is not an expensive set to build.  I put up a want list for the 41 remaining cards I need over there in the right sidebar. Take a look and let me know if you have any for trade. In the mean time, things will be quiet around here. Some sizeable surprise expenses leaves me a little light for a while.  I am skipping the bigger OKC show next weekend and am not sure how hard I will push to finish my 1971 set, even though I am down to needing two cards.  So,  in order to keep my vast readership interested, I may have to do a deeper look at this set in the weeks ahead.