My project of collecting autographed 1960 through 1963 Fleer cards has been on hiatus for a while. It has been over three months since my last addition, and four months since I last added a 1961. 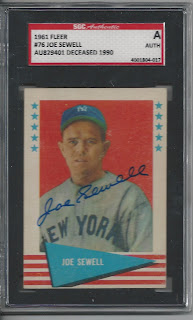 This doesn't represent a re-start of this project.  Technically, I never ended it such that I would need to restart it.  But, to be sure, it dropped off my priority list as I started to see the end of my 1956 and 1972 Topps sets come into focus. It also doesn't represent a restart in the sense that I am probably going to stop most hobby activity as The National gets closer. I have goals for that show that exceed my normal hobby spend limits.  So, while I do have one other player collection pickup to show, expect it to continue to be quiet hereabouts as I conserve resources.

Not that you could tell given my general lack of blogging even when I am active in the hobby.

Anyhow, I picked up this Joe Sewell for $23 delivered. Sewell played in the majors for 14 years, 11 with Cleveland and 3 with the Yankees. He played on two World Series winning teams; the 1920 Indians during his rookie scampaign and the 1932 Yankees during his penultimate season. He was a talented middle infielder primarily playing shortstop for the Indians and sliding over to third for the Yankees, who had Lynn Lary and Frank Crosetti holding down the 6.  Joe came from a baseball family, with brother Luke clocking in 20 seasons in the majors. Brother Tommy turned had a one game, one at bat career with the Chicago Cubs. Additionally, cousin Rip Sewell had a 13 year pitching career, primarily with the Pirates.  Joe Sewell was inducted into the Baseball Hall of Fame in 1977 by the Veteran's Committee.

You may be wondering how I am doing on this project.  Here is my progress:

What I am listening to: Midnight Train to Georgia by Gladys Knight & The Pips

Posted by carlsonjok at 7:25 AM No comments:

Since my last post, I've acquired more 1956 Topps cards.  A few through trades, but most through Ebay set break auctions.  I've not been posting as I have been busy at work and various projects around the farm.  But, three more arrived today and, since we had a major rain storm today there is little I can do outside tonight.  So, I am going to post the 3 '56s that showed up today: 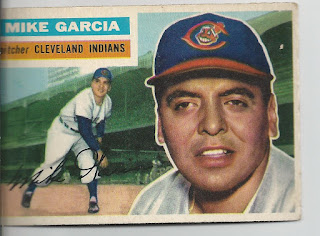 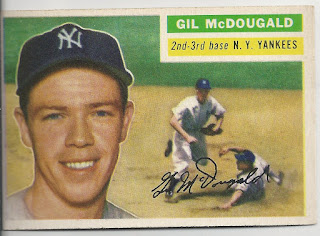 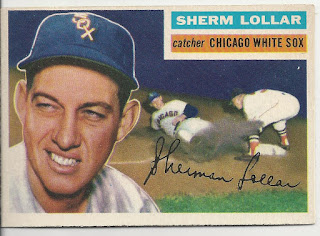 I am not quite sure what to make of Sherm Lollar's sneer, so I'll just put him in the binder and move on. With these three, I am down to needing 26 cards to finish my 1956 set.

On a related note, last week I booked my flights to Cleveland so I can go to the National show.  My parents live in Cleveland, so I'll be flying in on Friday, crashing at their place and attending the show on Saturday and Sunday. I don't fly out until Tuesday morning, so I am considering running out to the Cedar Point amusement park on Monday.

My goals for the National are to look for one or more of the three 1963 Fleer's I don't have in autographed form (Clemente, Boyer, Farrell) and or finding an affordable 1956 Topps Mickey Mantle. That's it. Obviously, once I get there, who knows what will happen.  But, I am mainly going just to see what it is all about and work on my hard-to-finish projects.

What I am listening to:  Leonard Cohen's Hallelujah by Jeff Buckley and k.d. lang