Life is hectic around here.  I'm trying to get ready to go on our now-annual fall pilgrimage back to Ohio to visit family and spend a weekend at Cedar Point. Additionally, one of our horses foundered seriously a couple weeks ago and it has been a bit of a struggle, with multiple visits from the vet and the farrier, to get her stabilized.  So, I am going to knock one more out before I likely go back on radio silence for a few weeks.

Here is the 8th autographed 1961 Fleer I have added to my collection.  It cost me the crazy low price of $23.49 delivered. 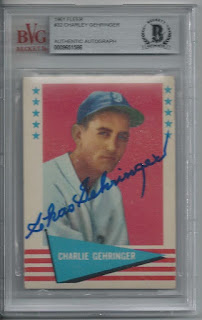 In reading his SABR biography, I found an interesting tidbit about his later life. Apparently, as one of the oldest living ballplayers (at the time) he was overwhelmed with autograph requests.  Since many of those requests were from folks who intended to resell them, Gehringer began to charge for autographs. His friend, baseball writer Jim Hawkins, said “Ninety-five percent of the requests were from people planning to resell Charlie's autograph......That was when and why Charlie began charging for autographs and requesting that all such mail be sent to me. We did so until the end of his life. But believe me, he didn't do it for the money. He did it for his quality of life and peace of mind.”

What I am listening to: Factory Girl by The Chieftans with Sinead O'Connor.

It is time to move on to the 1961s.  I thought I had a couple of additional 1960s on the way, but that didn't work out. I went against my better judgement and deviated from my plan to only add 1960 and 1961 cards if the autograph had been authenticated by a reputable organization.  The two I won were in raw condition. My intent was to have them authenticated.  However, before I spent a tidy sum on authentication, I submitted them online to PSA for a Quick Opinion, which only costs $10 each. Both came back as "Likely not Genuine," so they are being returned for a refund.  Lesson learned: stick with the plan.

Anyways, on to the seventh autographed 1961 Fleer card I acquired: 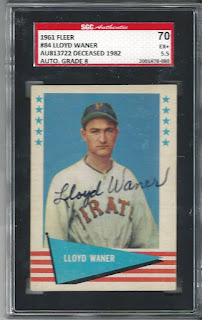 It cost me $28.27 delivered.  Lloyd Waner was born in Oklahoma a year before statehood in Harrah, a rural community on the east side of Oklahoma City and a 30-40 minute drive from where I live.  In fact, our farrier lives in Harrah. Interestingly, one of Harrah’s rivals was Meeker High School, which is about 20 miles further away. The star player for that school was pitcher Carl Hubbell.

Lloyd, like his brother Paul, is in the Hall of Fame.  Although, modern statistics don't really favor Lloyd. He has a career WAR of 24.1 and an OPS+ of 111. Clearly, a better than replacement level player, but not what modern observers would consider a lock for HOF admission.  If you wish to read more about Lloyd, here is his SABR biography.


What I am listening to:  Low Rider by War 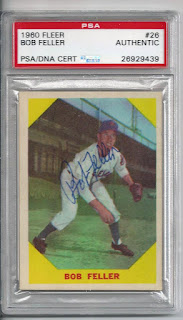 So, I have not been making much progress on posting.  My life has been busy and there just hasn't been enough time to sit down and write blog posts.  It has gotten to the point that I don't even remember the order that I acquired the cards on this project. Life doesn't look like it is going to get calmer in the near future.  The farm keeps me busy most evenings and weekends. My wife and I have our annual trip back to Ohio to visit family and go to  Cedar Point on one of the Halloweekend events coming up.

Honestly, I don't see much relief until winter.  I have been making some progress on this quest and have a couple nice potential additions to share later this month. So, I am going to just try and push these posts out in a half-assed manner just to get them out there and get caught up. 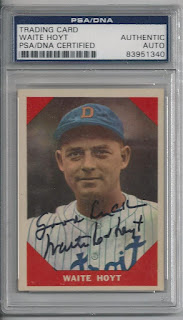 Nice of Waite to wish me luck on getting caught up.  Waite Hoyt is the sixth autographed 1960 Fleer card I have acquired. It only cost me $21.95 delivered.

Hoyt spent 21 years in the majors with 7 different teams. He played in 7 World Series and was on 3 World Champions in his career.  6 of the WS and all three wins came with the Yankees, including the all time great 1927 Bombers. He was elected to the Hall of Fame in 1969.

That's it.  Phoned it in, to be sure.  Expect more weak efforts coming up.

What I am listening to: Not Dark Yet by Shelby Lynne and Allison Moorer