I've talked about getting back into the hobby waters in some small way. I still have a job search ahead of me, and it still isn't clear exactly when.   The powers-that-be have finally bowed to the reality most everyone else has accepted and moved the planning date for the merger out from mid-September to late October to mid-November.  That would put my layoff date somewhere around May 1, plus or minus a couple weeks,  I would have liked to make it to June 1, since I started with this company on May 21, 2012 and I would have hit 10 full years of service. It would have netted me some additional severance, but also just because 10 is a nice round number.  A minor star kinda number.  If it happens, it happens.  If it doesn't, that is fine also.  Moving on means not looking back.

My preparations for that coming job search are progressing nicely and I still expect to have a comfortable cushion of savings for that time.  So, while I have been dabbling a bit, my hobby spending has been way down.  So, I recently took the plunge and bid on a lot of 47 signed 1961 Fleer cards in a recent auction.  And, guess what? 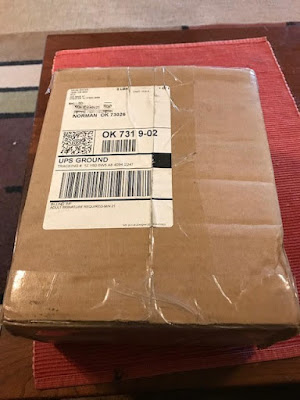 I have to be honest, this box contains my largest single hobby purchase in the 11 years I've been back in the hobby.  By a long shot.  My previous largest purchase was around $300 and this came to $1,100 after shipping.  Ouch, right?  Yeah, ouch.
It probably won't end up being bad in the long run.  Before bidding I looked up comps on all the cards and it totaled up to a bit shy of $2,000, with the cards I actually needed totaling about $900.  So, depending on how you look at it, I either over or under paid. 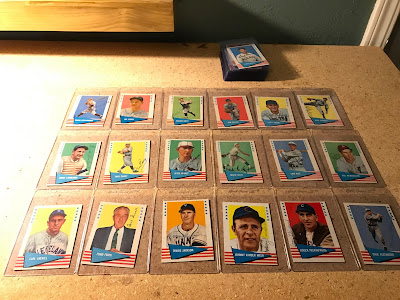 Of the 47 cards in the lot, I needed 18; the 18 you see spread out above. The stack in the back are the 29 cards that I already had.  Those will be shipped off to another auction house later this month.   My hope is to recoup a decent portion of my outlay.

I am hoping to restart the series of looking at the subjects of these cards.  Though as I look back, the last one I did in the series was part 33.  That means sometime in the last 6 months I added 5 others.  I guess I am going to have to go back and figure out which ones.

Anyway, this gets me up to having 56 signed cards from the 1961 Fleer set.  The set has 154 cards, but by my calculations only 96 subjects were alive at the time the set was issued, so I am sitting at 58% complete. Alas, it gets harder from here since I have pretty much gathered all the affordable autographs and just have the heavy weights to go.

What I am listening to: Easy by The Commodores