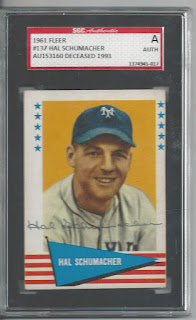 Posted by carlsonjok at 6:05 AM No comments:

So, here is my second autographed 1960 Fleer card of Hal Newhouser: 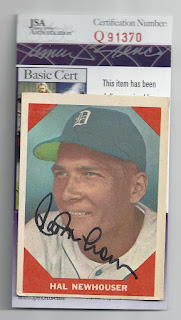 
Let's kick off my new and improved 1960s Fleer Autograph Project.  By way of review for any new arrivals here, several years ago, I started working on getting my 1963 Fleer set autographed.  As of today, I have autographed versions of 60 out of the 66 player cards in the set.  1963 was Fleer's first set to feature contemporary players.  The company had issued two sets, in 1960 and 1961, that featured great players of the past.  My quest here is to acquire as many autographed versions of the cards from those sets as I can.

The difference will be that, for 1960 and 1961, I am only going to chase certified authentic autographs.  Since 1963 featured many players who are alive today, I didn't have such a restriction. Indeed many of my autographed 63s came from public signings and TTM requests.  However, since the earlier two sets were of past greats, many of the subjects are long departed this mortal coil.  Certified autos, while not foolproof, do significantly increase my confidence that the signatures are genuine. 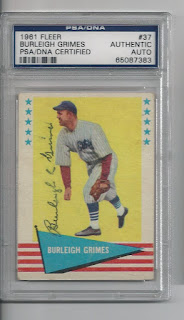 Now, on to Burleigh Grimes, who passed away in 1985.  Grimes played 19 seasons in the majors, with 7 different teams between 1916 and 1934, amassing a 270-212 record. He was inducted into the Hall of Fame in 1964.  Modern metrics don't really do him justice. According to Baseball Reference, he accumulated 46.9 WAR over that 19 year career, which is only good enough for 119th best on the all time list. That puts him behind fellow 19 year veteran Bartolo Colon (49.4 WAR), who is by no means a HOFer.
Posted by carlsonjok at 6:30 PM 2 comments: