It was a year. When I last left you, I was still waiting on the acquisition of my employer by a larger company to close. The transaction finally closed in early December and because, when given the option of moving to Houston or moving on, I chose the latter, a 180 day clock started ticking.  When that clock runs to zero sometime around June 3, I am officially unemployed. I haven't started looking for a new gig yet, but will be starting shortly.

As it stands, I have had plenty of time to prepare, so the change doesn't represent an existential issue. I'm blessed to have that flexibility and to be able to keep somewhat active in the hobby.

So, enough about that. Shall we talk hobby?  My hobby activity was a bit odd.  I scaled back my level of activity as I prepared but, at the same time, also completed my three most expensive purchases.  So, let's review the year. First, though, I do want to acknowledge a recent kindness.

To get cards from Night Owl is always an opportunity to experience joy and guilt in equal measures. Joy because he seems to have access to really great cards that I don't see very often, if at all. Guilt because he does so much for the hobby already at his blog that receiving cards from him always seems to overweight one side of the ledger. I get that our little corner of this hobby isn't about making sure the debits and credits balance, but my collecting is so inwardly focused that I do occasionally need reminders of the obligation to be a good member of the community. 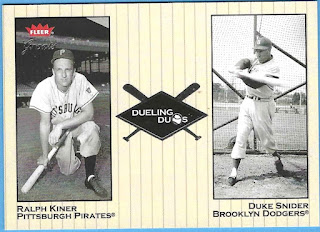 My early collecting included a mix of modern and vintage.  While I left the annual Topps releases behind quickly, there were several modern series of sets I really liked.  The Fleer Greats of the Game sets issued between 2000 and 2004 are the prime example.  I was mostly done with 2002, except I only had half of the Dueling Duos insert set. I had mostly forgotten about it when a package arrived from Greg that included three of my needs for that subset. I have acknowledge that one of the three was the card above that featured Duke Snider, a legendary Dodger.  Getting such a card from a Dodger collector is a great treat.  And it provided the necessary incentive to get this over with. I managed to piece together the remaining subset needs from COMC and Burbank. 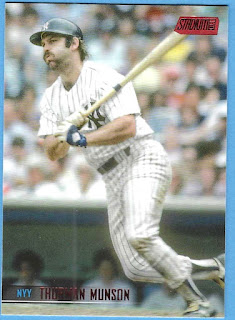 I am almost exclusively a vintage collector, but I do occasionally pick up modern cards that catch my eye. If I came across this card in a discount box at a show, it would buy it.  No questions asked.That I received it as a gift makes it all that much more special.

I still remember where I was when I learned that Thurman Munson had died in a plane crash.  I grew up in western New York and my family's annual vacation was to rent a cottage in the Thousand Islands near Alexandria Bay. Why mention this at all?  Well, Alex Bay is a short drive from where Night Owl lives. 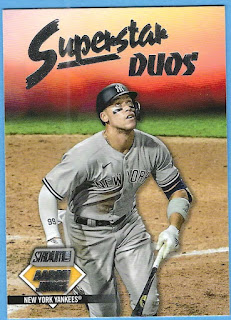 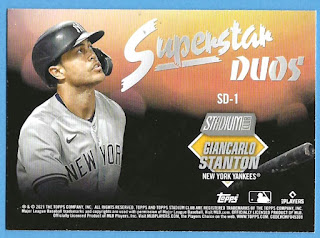 An interesting card from this year's Stadium Club offering: a Superstar Duos card with Aaron Judge and Giancarlo Stanton on opposite sides. The background graphics, particularly on the Judge side, remind me of the colorful backgrounds on the 2009 through 2011 Tristar Obak sets I love so well.

I'm not going to show any cards here, as I still intend to have a series based on them at some point soon. But, for something I started on a lark nearly 10 years ago, I am amazed at how much progress I've made. See for yourself:

Set building has always been a slow process for me. I see folks on Twitter who finish multiple vintage sets per year.  It is hard for me to fathom that.  Once I got past the late 1970s sets, it usually takes me a minimum of two years to complete a set and sometimes more.

I finally finished my 1968 Topps set in 2021. As near as I can tell, I started this set in 2017, but made absolutely no progress after 2019. I sat at two cards to go for two years waiting for the cost of the Nolan Ryan rookie card to come down. It never did and I finally resolved to just bite the bullet and get it over with.  I broke down and got the Lou Brock card earlier in the year, only leaving #177 to go. I managed to pick this up in an auction for $325 delivered: 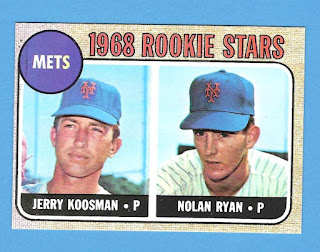 This was the third most I have ever spent on a card, but was well below what all but the poorest of  Ryans usually go for.

If you look at the comps on this card, the price I paid was a steal. It went so low because of color fading on the left hand side of the card.  But, it is in great condition otherwise, and it has great eye appeal despite the fading.  So, I am very happy to have it and to have this set finally in the books.

I also have finished 1960 Topps. Sort of, anyways. The final card I needed for that set is still in transit to me and should be here Tuesday.  It isn't this card though: 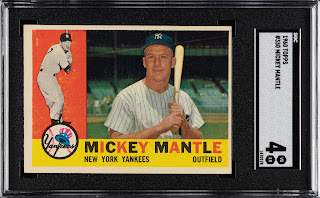 I got this earlier in the year in a Robert Edwards auction.  This set me back over $400 and is the most I have ever spent on a card.  Evern more than the 1956 Mantle I got at the National several years ago. Barring a postal catastrophe, I'm glad to have finished 1960.
I have not, however, finished 1965. 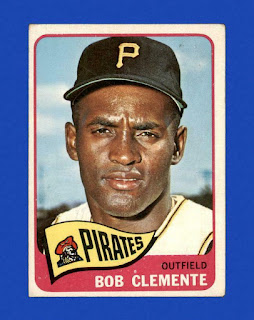 I started working on 1965 four years ago, in the late winter of 2018, and I am still needing 21 cards to finish. While I picked up the Mantle in 2020, I still need a fair number of the high value cards, like Aaron, Mays, Banks, Uecker, plus the Carlton and Niekro rookie cards.

Wait. Back up a second. Uecker? It's a high number, but a common nonetheless. Yeah, I don't get it either.  Beckett assigns it a book value of $25, but even rough copies of the card sell for more than that.  It is just odd.

Anyways, I am skeptical of my ability to finish this in 2022.  I looked back. In September of 2020, nearly a year and a half ago, I needed 38 cards to finish, I've added a total of 17 cards in 16 months.  I may just have to bite the bullet and start resetting my cost expectations on this set, because it really shouldn't be this hard.

I have two player collections, Johnny Antonelli and Paul Blair.  This year, I undertook an effort to try and catalog the cards that are available for each. I mainly used TCDB, but found it incomplete andsupplemented it with what I already have.  If you look at TCDB, you will see me as having the largest collection for both players.  But, in summary, I still have a way to go. 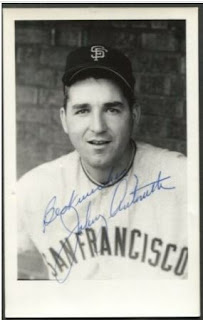 This is the latest addition to my Antonelli collection, a James Elder postcard.  At the moment, I have catalogued 98 unique Johnny Antonelli cards and postcards and, also at the moment, I have 66 of them.  67% is pretty good, but not good enough if I am going to be serious here.  Unfortunately, the 32 I don't have are all pretty obscure. How obscure? Well, the only one of the 32 I have actually seen is a 1960 Topps Venezuelan card.  When a Venezuelan is the least obscure of the remaining needs, you know the rest are rarer than hen's teeth. 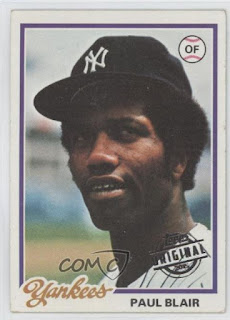 My entry back into the hobby was trying to collect Paul Blair cards, since I had a Paul Blair model glove as a kid. Little did I know what I was getting myself in for. I have catalogued 209 different Paul Blair cards and photocards.  There are two sub-categories that I am ambivalent about:  Topps buyback cards (which are basically vintage cards that are stamped with foil, like this one) and cut auto cards mainly produced by Tristar.  Alas,. if I am going to continue to advance my Blair colleciton, I am going to have to overcome that ambivalence.  As of today, I have 154 of those 209 items, for a respectable 74%.

So, that was a summary of where I am to date. I'm going to try and blog more in 2022.  There are a couple of series I started and let die that I'd like to pick up again. In my next post, I'll lay out how I see my hobby '22 shaping up.

What I am listening to: Texas Sun by Khruangbin & Leon Bridges

On this continent and in the psyche of its people the plains have always been a staggering presence, a place of myth and cliche, a place for transformation, bafflement, or heartbreak. From the east they are a release from the clawing of swamp and tangle and human density. From the west they are a drop and a straightening after the kinks and strains of mountains. Entered from any direction they are a new air, a joy to behold, a combination of large-scale intimidations and primordial inner acoustics.