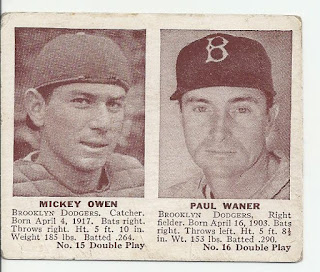 Things have been quiet here lately. With regard to my collection anyways.  In the last two weeks I have had to replace the AC compressor on two different cars, leaving a fairly big hole in my pocket.  I have picked up a few things here and there, and have managed to complete two sets. 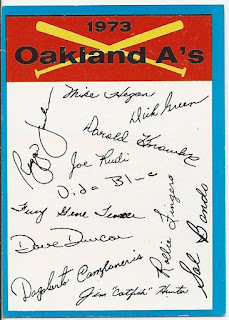 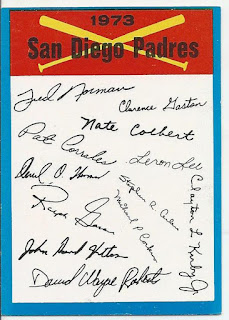 These were the last two unnumbered checklists I needed to complete my 1973 Topps set. So, at the moment, the only "flagship" sets I am working on are 1956, 1975, and 1979.  I'd like to finish at least one of the latter two prior to the end of this year.  Depending on how you look at it, it took me almost three and half years to finish this set. I got my first '73s in a trade with Ted at the now defunct Crinkly Wrappers in January of 2012, although I didn't start working it in earnest until about a year later. 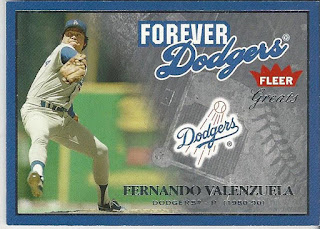 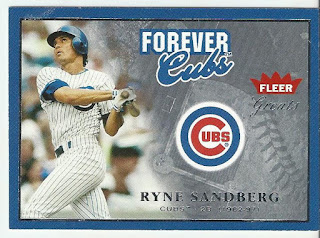 These were the two cards I needed to achieve my definition of complete for the 2004 Fleer Greats of the Game set. This was over 4 years in the making, as I really started on this set in April of 2011.  It isn't a master set, as there is the serial numbered blue parallels, the autographed subset, game used memorabilia parallels to various insert sets, and the uber-expensive Yankee clippings insert set.  But the cost to complete any one of those is beyond what I willing to pay and would only distract from my core vintage set collecting.  So, this one is done also! 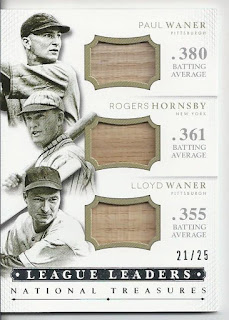 Lastly, this is the one card I have added to my Paul and Lloyd Waner player collections. I bought it on a whim and probably shouldn't have.  It cost $46 delivered and is typical of most modern Waner releases: bat cards issued in low numbers. I like the card real well, but I am discouraged by the prices these modern cards get.  I am not sure what I am going to do with this collection. I may just limit it to vintage (which are also expensive) and non-exclusive modern cards.  At least for the moment, the need for car air conditioning in the Oklahoma summer has forced that decision into the future.
Posted by carlsonjok at 2:03 PM No comments:

There was a show at the end of June I attended. My hope was to make progress on my 1975 and 1979 Topps sets. I made no progress on either, but I consider it a success anyways, as I made progress on several other sets I am working on. I got to the show and headed over to say hello to the two sellers I get most of my cards from and to take a quick scan of their tables. I didn't see anything that immediately grabbed my attention, so I decided to walk around the room and see what else was there. Imagine my surprise when, after almost completing the circuit of the room that I came across Roger Neufeldt of Sports Memories of Oklahoma. Roger is the best source for high quality vintage around here, but he hasn't done a local show in well over a year. He mostly does shows in MLB cities and the National. However, the local show is now being organized by a new group and he decided to give it another shot. So, I ended up spending most of my money with him. So, what did I get? 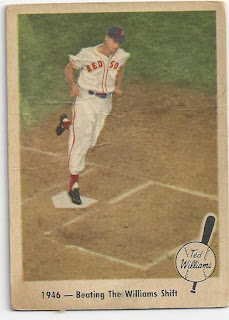 One card from the 1959 Fleer Ted Williams set. This is the 39th card I have from that 80 card set.  Interestingly, one of the other sellers told me that he recently sold a PSA 7 version of card 68 from the set for $1000. That is the one card that I think I may never acquire from this set.  Card 68, titled "Ted Signs for 1959" was pulled out of distribution very early in production since it featured a picture of Ted Williams signing a contract next to Boston GM Bucky Harris who was under contract with rival Topps.  Consequently, few made it into the wild.  Even mid grade versions sell for over $400.  I may just end up filling in my set with a reprint, which do seem generally available. 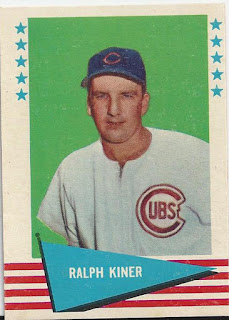 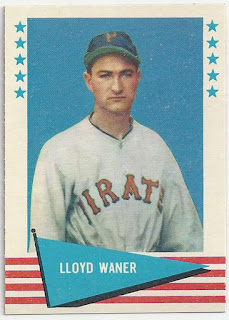 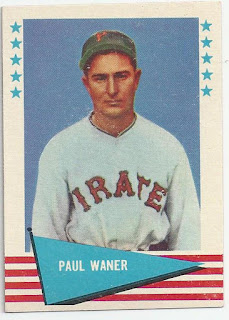 Additionally, I also picked up additional copies of the two Waner brothers cards from this set for my PC. 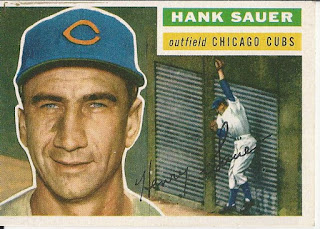 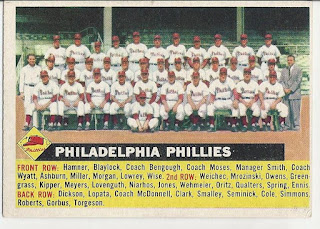 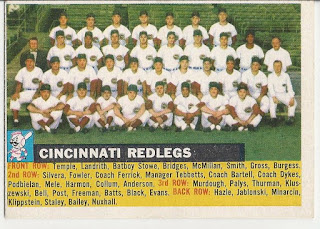 I've got a few other things brewing for future posts, including a call out to the blogging community to find me the single card I need to complete a set.  I was also hoping to have a new addition to my 1963 Fleer autograph project, but the consigner I sent a card to has apparently lost it and is not responding to my requests for information. Hopefully that will resolve itself shortly.

What I am listening to: A Feather's Not a Bird bu Rosanne Cash

Posted by carlsonjok at 12:08 PM No comments: