After the big 1963 Fleer Mays pickup, my hobby activity has been quiet.   A serious uptick in the activity at work, along with the various farm chores that come with the spring, have kept me busy.  My recreational attention has also been focused elsewhere (but more on that later.)

I have picked up a few more autographed Fleer cards recently. Two are still in transit, but here is one that has been sitting on my desk for a while. 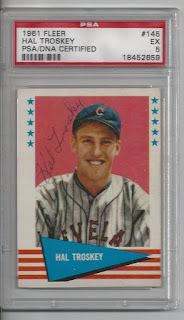 Hal Trosky was a power hitting first baseman with the Cleveland Indians in the 1930s and early 1940s.  His 11 year career was shortened as intense migraines kept him from playing, and out of military service, in 1942 and 1943. With the migraines under control he played for the Chicago White Sox in 1944 and 1946, after which he retired to farming and scouting in his native Iowa. His finest year was 1936 when he hit .343/.382/.644 with 42 home runs and a league leading 162 RBIs. Alas, it was only good enough for 10th place in the AL MVP behind none other than Lou Gehrig.  Trosky passed away in 1979 at the age of 66.

A Word about the blog: You may have noticed that I have changed the blog header.  I had been exclusively a baseball fan until recently.  Living in Oklahoma City, it is hard to escape the NBA Thunder.  As the years have passed, my wife and I have grown more and more interested in following them.  We ended up buying a 6 game mini-package of tickets this year and managed to attend 10 games total (They went 9-1 in those games.)  We also have playoff tickets for the first round against the Houston Rockets. So far, I have not been paying attention to baseball because the Thunder have consumed what little band width I have available. I have no intention of collecting basketball cards to go along with this new passion, although you may see one or two every now and then.

A word about the banner:  I love that picture. It was taken right after Russell Westbrook hit a buzzer-beating 3 pointer to win the April 9th game against the Denver Nuggets in Denver. This was the game where Westbrook collected his 42nd triple-double to pass Oscar Robertson for the single season record.  It was also the game where the Nuggets were eliminated from the playoffs.  The whole range of human emotion, from Westbrook's elation to the fans mixture of incredulity and resignation, is shown in that picture.

What I am listening to: No Mess by Sarah Gayle Meech

Posted by carlsonjok at 10:30 AM No comments: