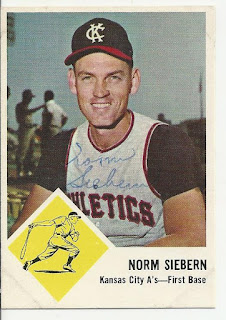 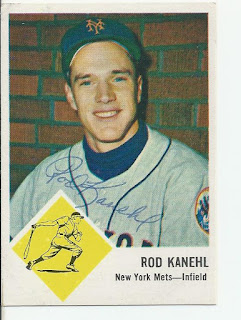 Hello World with a Package from Night Owl

Gathering from how much dust is laying around here, I am guessing it has been a while since I posted.

Yup, 13 total posts this year and none since May 11.  While I haven't been completely inactive on the hobby front lately, I didn't have much going on.  The adult world has taken the forefront the last couple months. On the good side, I finally upgraded my commuting vehicle from a 2006 Honda Civic (with over 210,000 miles) to a 2015 Ford Fusion.

On the bad, one of our horses passed away last month. It is said, for us humans, that a large portion of our medical expenses are incurred during the last few months of our lives.  The same is apparently true for animals, as well. Obviously, this isn't why you are here, so I will dispense with the elegy, though I could go on for a while about my old friend, Jack.

Some time back, I sent some cards to the Dean of Baseball Card Bloggers, Night Owl. I don't often send cards to him because my collecting focus and process doesn't lead to me having a lot of duplicates. But, when I can send some I like to do so. I cannot begin to state how much pleasure I get from reading what NO writes.  Sending a meagerly filled bubble mailer his way every once in a while is what I consider small recompense for the service he provides.

That said, he asked what he could send in return.  My main collecting focus right now, such as it is, is 1972 Topps. That is a set NO is also working on and is further along than I am.  I didn't expect him to have many to send.  I am not much of a modern era collector, with most my focus on pre-1980 Topps sets. So, I offered that I also like throw-back type sets that feature old timey players.  Any modern sets that catch my fancy tend to fall into this category, like 2004 Fleer Greats of the Game and (to a lesser extent) the 2009-2011 Tristar Obak sets.

A bit over a week ago, a bubble mailer appeared in the mailbox. I wasn't expecting anything, so I was a little surprised when I saw it was from Night Owl.  As my memory isn't what it used to be, it took a moment to remember our last conversation.  Anyways, the package did not disappoint. It included a bunch of cards from the throwback sets I like. 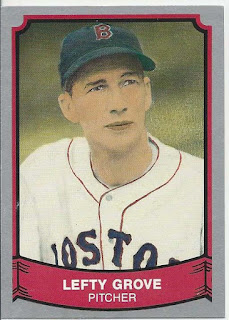 I'm not real jazzed about the 1989 Pacific set that the above card is from.   While I do tend to favor card sets with simple designs, this set is uninspiring.  Gray (sorta) works on 1970 Topps, but '89 Pacific is a snooze-fest.  Plus, it may be just me, but that painting/picture of Lefty Grove is kinda creepy looking.  This is a set I probably won't build. 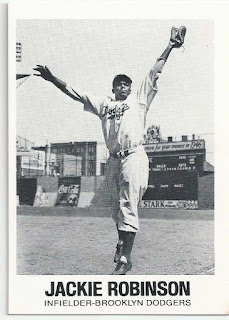 This is one of three Renata Galasso cards NO sent.  The Galasso set, issued in 6 series between 1977 and 1984, were the first non-Topps sets I completed when I re-entered the hobby back in 2011. I love this set, which borrows it's front design from 1960 Leaf. 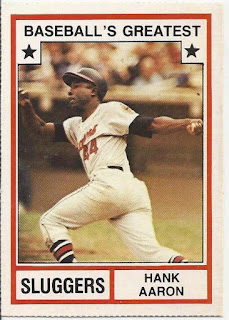 This is from the 1982 TCMA set Baseball's Greatest Sluggers. I haven't found much information about it in my admittedly cursory searching.  It appears that the 45 card set came in multicard sheets, as the card above has perforations around the edge.  I will definitely collect this set, along with the Hitters/Pitchers companion sets. 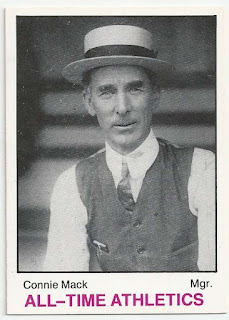 The All-Time Athletics set was released in 1983 by TCMA. It appears that during the 1970s and 1980s, TCMA released a whole series of All-Time team sets.  Prior to the above set being issued, TCMA has issued sets covering the Yankees, Dodgers, Cubs, White Sox, Tigers, NY Giants. There were four of 12 card sets in 1983: Athletics, Cardinals, and Pirates, with the Pirates having red and blue frame variations.  Then in 1986, it appears TCMA issued All-Time sets for all the extant teams not covered by the previous releases, including the Toronto Blue Jays and Seattle Mariners who were only entering their 10th season of existence in 1986. It would be fun to put all those sets together and I think I will. 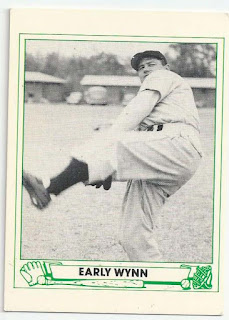 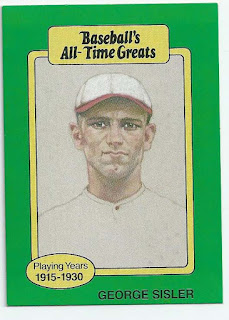 Ah, a non-TCMA issue. This is from the 1987 Hygrade All Time Greats, a 102 card set. I like this set as the painting-type images are better done than those in 1989 Pacific and the back is somewhat reminiscent of the 1960 and 1961 Fleer sets.  Hygrade appears to have only existed as a card company for that one year. 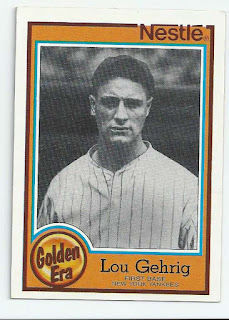 This card must have been hard for Night Owl to give up, what with his love of food issues. It appears this is a 33 card set, with 11 cards covering the Golden Era and the other two covering the Modern Era and divided equally between the AL and NL.  Another fun set I intend to complete.

That was quite the haul, but that wasn't all NO sent. 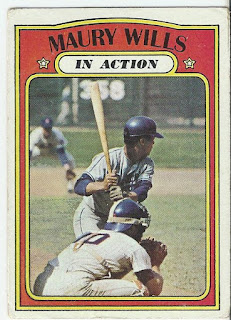 He also sent me 5 really nice 1972 Topps. I had all 5, but three of them, including this Maury Wills In Action were upgrades for me. 1972 is, or should be, my main focus right now.  The problem with it is that it is a huge set with 787 cards and was issued in series.  Series 5 and 6, 130 cards each, are the hardest to come by since they were issued in smaller quantities due to being released late in the season when attention had already turned to football cards.  Series 5 isn't horrible with $4-$6 book value on commons, but series 6 hurts with commons coming in at $12-$15 BV.

As I mentioned, there has been a little hobby activity over the last few months that I will try to share in the days ahead.  But, in the mean time: Thanks Night Owl!  A great package!
Posted by carlsonjok at 7:04 PM 1 comment: