Pandemic at the Disco

Life has gotten weird in a hurry, hasn't it?

In a way I was there at the beginning. No. That isn't quite right. I was there at the inflection point. It seems like forever, but it was less than three weeks ago. On March 11, I was at the Oklahoma City Thunder-Utah Jazz game. Or, more specifically, what was supposed to be the Oklahoma City Thunder-Utah Jazz game. My wife and are Thunder season ticket holders and this was an important game. After preseason speculation that they would be cellar dwellers, our Thunder were in the playoff picture. Firmly in the 5th seed in the Western Division, a win over the Jazz would move them up to the 4th seed.

Before that point, opinions on the coronavirus, COVID-19, were split. You could see it on the news, where political leaders downplayed the threat even while doctors and scientists were sounding the alarm. I even saw it on the Facebook page for my rural city ward. The ward, often described as a mélange of aging hippies and survivalists, was at each others throats about the severity of the situation.

Then, the Thunder-Jazz game happened. I got to the game about 15 minutes before tip-off, grabbed a hot dog and fries, and settled into my seat. The pregame ritual of introductions and the national anthem took place and then...nothing. I won't go into details. If you are a suscrcriber to The Athletic, there is a well written article about the evening.

Just a bit under three weeks ago.

The world has changed since then.  I am now working from home indefinitely and have cut back my hobby spending to almost zero. You see, I work in the oil and gas industry and, even apart from the global pandemic causing a collapse in demand, the Saudis have decided to open up the valves and start a price war to punish recalcitrant members of OPEC+ (mostly Russia) So, while the combination of the two don't represent an existential threat to my future, it does seem prudent to cut back on discretionary spending.

One thing that did filter in was this 1978 New York Yankees Picture Album that I snagged for $5 delivered. 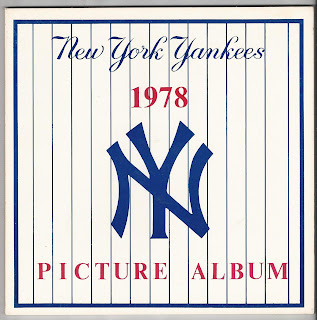 As I built my Paul Blair player collection want list I would check eBay to see if any of the needs were for sale. I mostly struck out, but when I looked for something described as "1978 Photo Album", this came up.  I bid on it and won.

As I pulled this out of the shipping envelope, I was hit with a wave of nostalgia. I realized immediately that I had this album when I was younger. I've always been a bit forgetful, so I have no idea how I got it or what ever happened to it. If I had to guess, my mother threw it away, along with my high school letterman's jacket sometime after I went off to college.  In any event, I have it again.

This copy is in great condition, which is probably a rare thing 42 years later.  It was not built for the long haul. The covers are thin cardboard and the binding isn't particularly sturdy.  In fact, it seems like it was designed for the pages to be pulled out individually easily. I won't open it up wide enough to scan a page as that would be a bit too much stress on the binding. I will however leave you with this picture of what I think is the 126th unique item in my Blair PC. 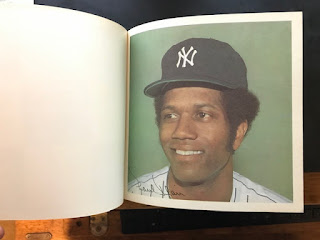 What I am listening to: We Take Care of Our Own by Bruce Springsteen

So, my recent new addition to my Paul Blair PC had me wondering how my collection looked in the larger scheme of things.  So, starting with the Trading Card Database, I decided to start to compile a list of cards and cross reference it against my collection. With the advent of unlicensed products, high quality custom cards, serialized parallels, a whole bunch of early 21st century Topps cards that look identical but are from different sets, and a set of similarly identical 1970s team post cards , it is really hard to come up with a comprehensive list.

I am still working through it and trying to get my haves and wants buttoned down.  But, I am pretty close and, as of this moment, I have 123 unique Paul Blair cards in my collection and have constructed a want list of 58 cards.  Honestly though, I am not sure it is a real want list as there are several categories on there that I am ambivalent about:

I am not necessarily ambivalent about 1 of 1s, but as a practical matter, I am unlikely to ever acquire any of them. So, I don't really count them.  I have actually seen one on eBay. But, it was a Four Barrel bat card from 2006 Upper Deck Epic where the 4 subjects where Reggie Jackson, Thurman Munson, Chris Chambliss, and Paul Blair.  The seller wanted $5,000.  Nah, man.  That ain't happening.

Also,  have two team issued post cards that I haven't yet been able to figure out what year they are from. So, taking these four categories out, I get down to 31 cards on my want list.  As I have worked through this process, I spot checked eBay to see what is available and I've been able to add a few more cards cheaply. 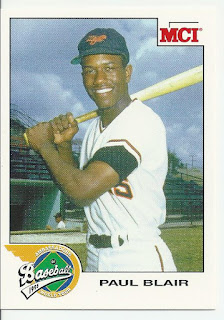 I had been aware of the MCI (remember them?) Ambassadors of Baseball sets from 1992 to 1994.  But, I hadn't done a great deal of research and was blissfully unaware of the 1995 set. MCI, an erstwhile telecom company that became part of Verizon in 2006, issued these sets in conjunction with a tour of overseas military bases by retired baseball players. Paul Blair was the only player to appear in all 4 sets. 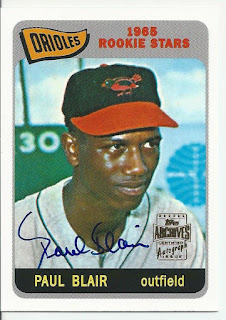 I swear I had this card. I've been overlooking it on eBay for years. Guess why. 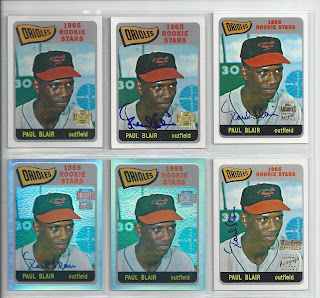 That is why. Multiple, virtually indistinguishable cards issued during a short period of time using the image from Blair's half of the rookie card he shared with Davey Johnson in the 1965 Topps set.  I can only imagine how hard it must be for collectors like Night Owl when there are probably dozens of cards using the same image for all-time greats like Jackie Robinson.

I'll probably end up publishing my want list in the next few days, though I don't expect much luck in finding these needs that way. But, we'll see.

What I am listening to: Lady Labyrinth by Ludovico Einaudi

It has been a while since I added anything new to my Paul Blair player collection.  If my blogging history can be believed, it has been over a year.  The last entry of an addition to this PC was November 27, 2018.  My blogging has been sporadic since then, so there may have others, but I don't think so.

Anyways, here is a new one: 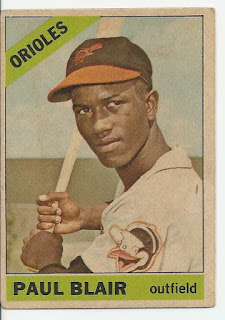 Most hobbyists will recognize this as a (somewhat stained) 1966 Topps card.  The keen-eyed observer will recognize that this card isn't stained so much as printed on lower quality stock and is actually a Topps Venezuelan.

I recently won a lot of six 1966 Venezuelans on eBay. I only really wanted this one, but decided to add two others to my miscellaneous vintage binder.  I have already found a home for the remaining three.  This is my third Venezuelan card in my Blair PC.  I also have a 1967 Topps and a 1972 Photostamp.  I haven't fully researched it yet, but I am only aware of two other Blair Venezuelans: 1968 Topps and 1972 Winter League.

This is the 117th unique card in my Blair PC.  The Trading Card Database has 176 cards listed for Blair.  I am about to start working my way through that list and reconcile against my collection to make sure I have a good (though likely not comprehensive) list of wants. I hope it won't take too long. But, spring is sprung around here and the outdoor farm project season is ramping up.  So we'll see how it goes.

What I am listening to: Grey in L.A. by Loudon Wainwright III

Allow me to rant for a moment. 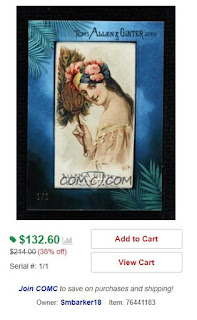 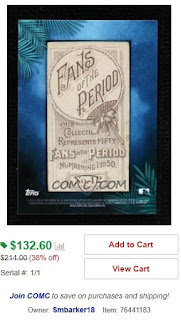 This encapsulates, for me anyways, what is infuriating about the modern trading card hobby. This card is a framed original buyback from the 2019 Topps Allen &Ginter set.  It is a 1/1.  What makes me mad about it? Let me count the ways:

I've stopped buying from COMC as the prices being asked for cards I need for my vintage sets are out of line with what I can pay at in-person shows.  But, I did see another "raw" Fans card on the site which is more in line with the current market. See for yourself: 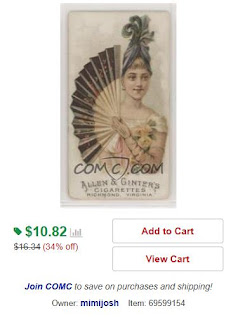 There is no way I'd spend over 10 times what the card is worth just because Topps put a frame around it and stamped it as a 1/1.  If you want to, have at it. But, I will judge you harshly. Okay, rant over.  I've said this before, but I'll be glad when all the Johnny-come-lately investor/collectors move on to the next big thing.

What I am listening to: It's the End of the World As We Know It by R.E.M.