The Secret Word is Fun!

So, I have been back from North Dakota for over a week now.  I had a great time hiking in the Theodore Roosevelt National Park, which included some up close and personal encounters with some buffalo.  I got home Tuesday evening last week and caught up on some badly overdue lawncare by Thursday night.   Saturday was looking bad weather-wise, so I decided to attend a card show down in Ardmore, about an hour and half south.  The show advertised pulling sellers from both Oklahoma and North Texas.  Since I skipped the big Dallas show in April, I thought this might be a good chance to visit with some of the Texas sellers who don't travel up for the OKC shows. And, since it was going to be a rainy day, my wife decided to tag along with the intent of wandering through some antique shops.

So, we drove to Ardmore and parked by Heritage Hall, a decent sized venue where I saw a Merle Haggard concert a few years ago. I went into the building and it was almost completely empty. I counted three sellers, two who were selling memorabilia like mini-helmets and not cards, and one seller with a table that was just graded modern mojo cards.  I turned on my heels and was back to the car before my wife had even gotten out of the passenger seat.  So, we spent the day together, which was nice.

Anyways, you may be wondering about that box of Pee-Wee Herman cards. Well, let's get to it.  The box had 36 packs, each advertised as containing 3 trading cards, a sheet of tattoos, an activity card, a sticker, and a wiggle toy, I found a checklist which helped me identify whether I had  complete set (spoiler: I didn't) So, let's take a look.

There are 33 different trading cards, each with two variations.  The variation is found in the background graphics, which you can see above. I fell three cards short of having the full 66 card set. It is interesting that Topps was already dabbling with planned variations back in 1988. 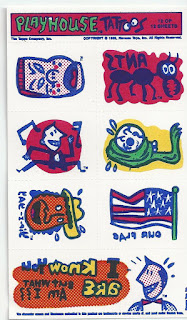 There are 12 different sheets of tattoos. I did get all of them. 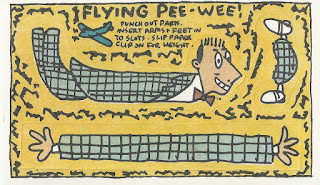 This is one of the activity cards. The checklist I found on line suggests that there were 5 different types of activity cards with 4-5 variations each. But, it wasn't detailed enough for me to determine what I did or didn't have. So, I really didn't bother trying to figure it out. 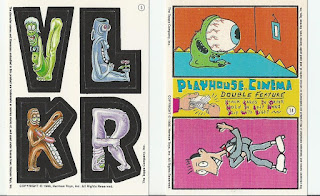 The sticker cards included letters, as seen above, as well as individual images.  The back of the stickers was flip card images.  Basically, you stack the 40 different sticker cards (plus 4 checklists) in order and fan through the, you see moving images. Considering the box only had 36 packs and horrible collation, I didn't get anywhere near a complete set of 44. 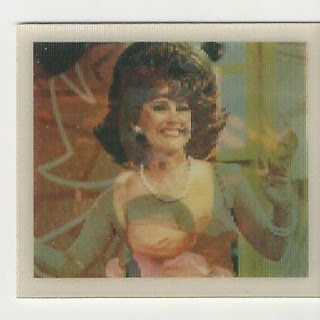 This is the wiggle toy. Better known to sports card collectors as a 3-D or lenticular card.  There are 12 different wiggle toys in this set, and I did get a complete set.  The card above is Miss Yvonne and the puppet bully Randy.  As an aside, I looked up the cast of Pee-Wees Playhouse, and the actress who played Miss Yvonne, Lynne Marie Stewart, is an accomplished actress who had \appeared such iconic movies and TV Series as American Graffiti, MASH, Arrested Development and It's Always Sunny in Philadelphia.  She appears to have worked almost continuously since 1973. Seriously. Check out her filmography.

Anyways, that was s fun box to open, but the set didn't excite me enough to want to complete it. In fact, I am not even going to sleeve it up.


What I am listening to: Machi Bhasada by Bloodywood

Email ThisBlogThis!Share to TwitterShare to FacebookShare to Pinterest
Labels: Nonsports 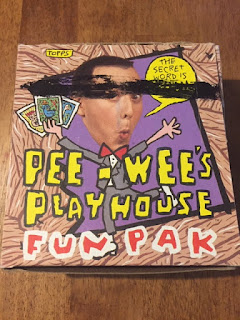 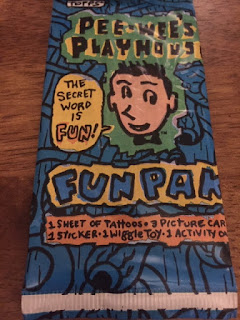