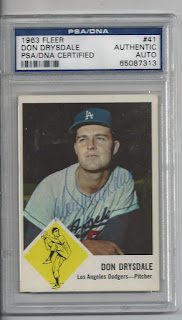 This is one I have waited a long time for.

There are actually two others on EBay right at this very time.  But, neither were desireable.  Drysdale autographed cards go for $30 to $60 all day long on EBay.  Of the two cards, one was in the right price range at $69.99 but the card was in horrible condition.  The second card was in great condition with a bold signature, but the seller wanted $200 for it.

Earlier this week, while my wife and I were waiting to see if we needed to head for the storm shelter (we didn't, although I had to earlier today), I checked one of my saved searches on EBay and this popped up.  Naturally I jumped on it. And today it arrived.

I can't believe I've made it this far. I started this quest as a lark 3 and a half years ago and I now have 80% of the cards signed.

What I am listening to: Choctaw Bingo by Ray Wylie Hubbard (NSFW, but funny as hell.) 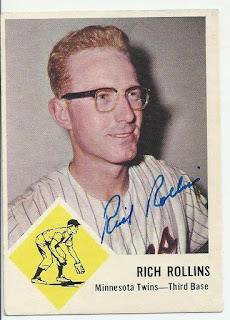 This is, as the post title states, the 52nd card from the 66 card 1963 Fleer set that I have autographed.  I had sent a card TTM to Rollins for signing back in January.  But, after 3 months I figured it may not be coming back, so I went ahead and picked this one up off of EBay. With this pickup, I only lack one card featuring a player who is still alive.  That player is Willie Mays and, after last years aborted signing, I don't expect that will ever get a Mays signed Fleer.  There are actually a couple other cards I need from deceased players on EBay right now, but the card condition is either poor or the price is way too high. I have really enjoyed this project and would love to keep adding to it, but I am intent on not overpaying.

What I am Listening to:  Cooler 'n Hell by Ray Wylie Hubbard

March was a semi-active month hobby-wise.  I put an order in at COMC and picked up a few things on EBay. I didn't spend much money, but I did get enough to milk three weak posts out of it. Normally, I'd save the vintage for the last post, but as I worked through the scanning and cropping, I decided I really didn't want to do everything at once.  It's a Friday night, I have an glass with two fingers of Glenmorangie, and I am in with striking distance of finishing the last season of Star Trek:Voyager.  So, since I had started with the vintage cards, that is what I am going to feature in this post. 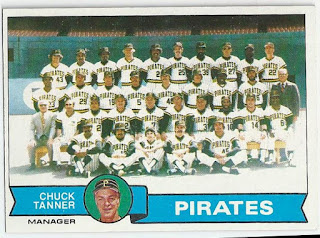 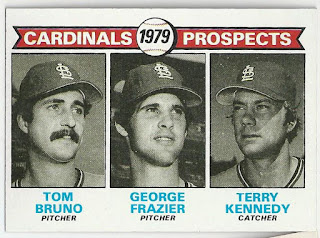 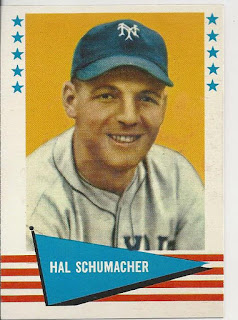 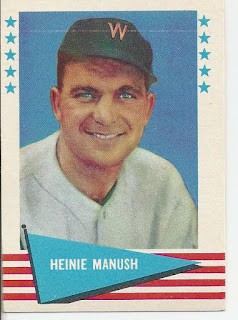 Two more cards from 1961 Fleer, leaving me only four left to complete that set. Unfortunately, two of those remaining four are Babe Ruth and Ted Williams.  Very expensive and I expect it will take me a while to find them in the right condition at the right price.

Coming up: Modern cards and some player collection additionsl

What I am listening to:  So Far Away by Carole King