I started this post over two weeks ago and my progress has been very slow. Frankly, I'm not sure what that is about, but I suspect it may have to do with my growing ambivalence for this set. Of course, it may be because this is my first attempt at reviewing a set of cards and I am trying to make it interesting. I don't know.

I'll starting off by showing you two of my favorite cards, one black and white and one color. 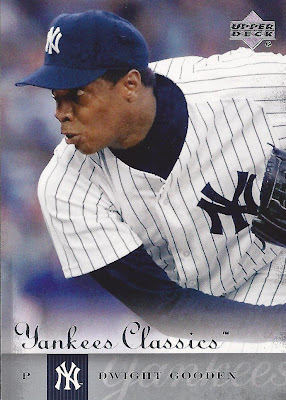 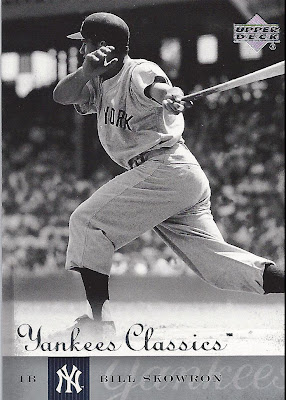 Overall, I like the design. It has a nice classic look to it. In my opinion, it would have looked better if all the photographs were black and white, but I think that is a minor point overall. The choice of photographs is generally pretty good. The Gooden card above is a favorite. It isn't what I would consider a typical baseball card photo, but I like it because it zooms in to capture his intensity.

There were a few clunkers however: 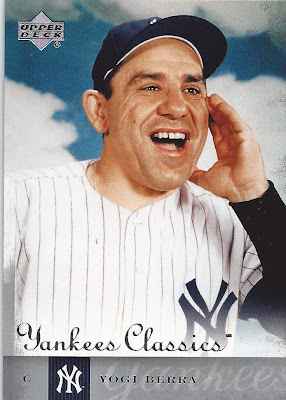 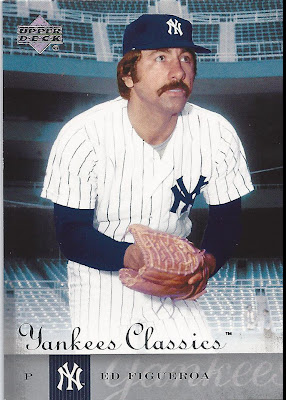 The Berra picture looks like they stood him in front of the backdrop for an off-off-off Broadway play and told him to do something funny. It seems designed to capture Yogi as a baseball personality rather than as a baseball player. I get that he is a great personality, but it seems sometimes that is all he is being remembered for.

The Ed Figueroa card is my least favorite of the set. I can't be sure, but it looks to me like they Photoshopped him in front of Yankee Stadium. The edges along his hat and hair seem just a little to straight and clean to me. Another thing I don't like about this card is that they appear to have applied a vignette effect (the halo effect) around Figueroa in the photo. I am not a big fan of vignetting to begin with, but this is a particularly lousy job.

I bought this box expecting to get a set of cards of great Yankees. I suppose I only have myself to blame. I really should have looked at a set checklist before pulling the trigger on this. In any event, having now thought on this some, I have to say that as a set goes, it is rather unfocused with regard top subject matter. It certainly includes great Yankees. However, it also includes great players who played for the Yankees. For example: 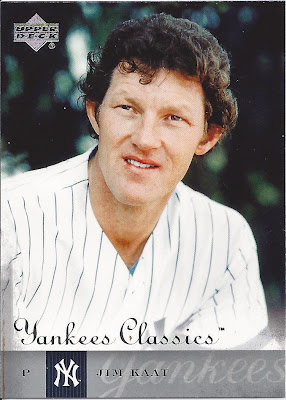 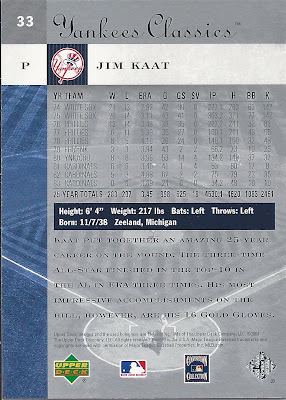 There is no question, Kaat was a great player, but he only appeared in 44 games as a Yankee as a middle reliever over part of two seasons. Great player, but not a great Yankee.

It also includes good players who played for the Yankees. For example: 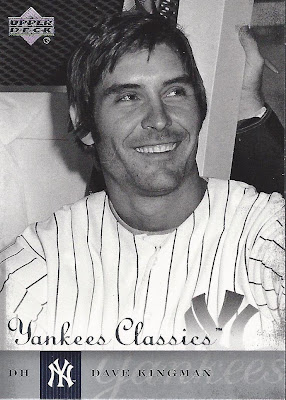 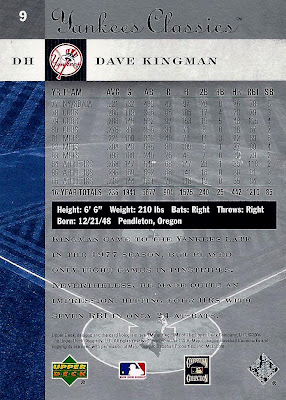 I wouldn't call Kingman a great player. Sure he hit 442 home runs, but generally sported anemic hitting performance coming in at a .236 BA and .302 OBP over the course of his career. On top of that, take a moment to read the card back. Catch that? His Yankee career was all of 8 games. Let that sink in. 8 games.

Finally, there were players in the set who were neither great nor merely good. Or had a particularly long career. For example: 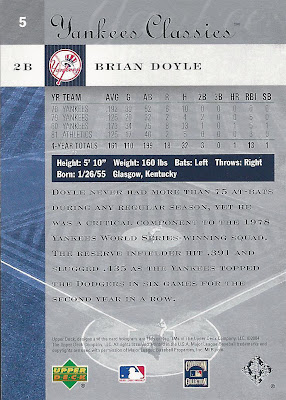 That is Doyle's complete regular season MLB career on the back. That's right, he never crossed the Mendoza line. His main claim to fame is a stellar post season in 1978.

So we have a set with great Yankees, famous players who passed through the Yankees clubhouse, and players who had brief moments of remarkable performance in a Yankees uniform. I can't escape the idea that this set was put, in particular for modern era players, with an eye to who Upper Deck could get to sign an autograph deal. Of the 85 players in the base set, at least 70 had autographed cards.

I haven't examined each card in detail, but there were several quality issues that I did pick up. One was on the back of the Brian Doyle card shown above, where it says "...he was a critical component to the 1978 Yankees World Series-winning aquad. The reserve infielder hit .391 and slugged .435 as the Yankees topped the Dodgers in six games for the second year in a row." That is incorrect. Those numbers were for his entire post season, which included the AL Championship series against Kansas City. In the World Series, Doyle hit .438 and slugged .500.

Also, look at this card: 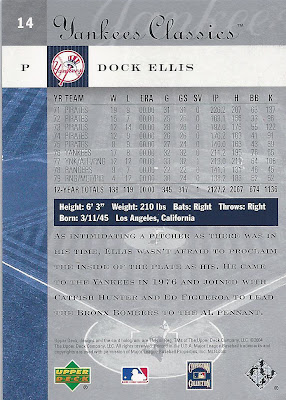 If you look at the set checklist, you'll see that the autograph list was pretty good. My earlier criticism under "subject matter" still holds. But, all in all, it had some great names on it. So, how did I do? 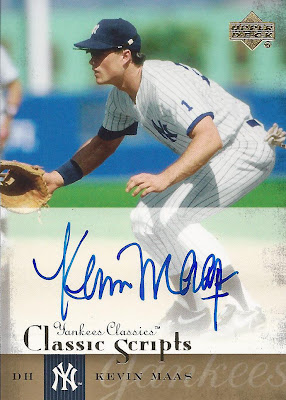 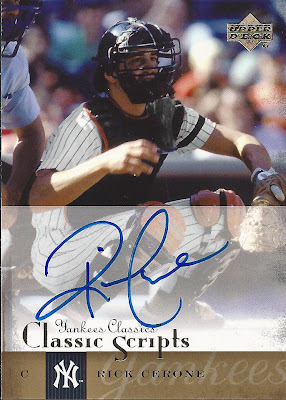 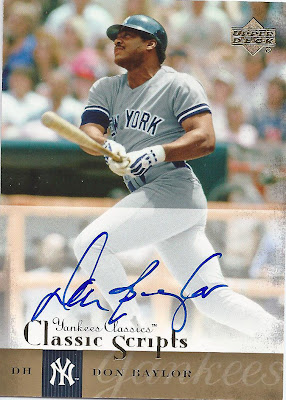 Kevin Maas was one of the players I assume is in this set because UD could get him to ink an autograph deal. It is certainly an accomplishment even to make the majors. I don't want to be seen as detracting from anyone achieving that. But, that card isn't what I would call a great pull. Rick Cerone is a little better. He did have an 18 year career, though mainly as a backup catcher extraordinaire. The one gem of an autograph, in my opinion, is the Don Baylor.

While was an interesting set as conceived and designed, it was hamstrung by poor execution. I managed to complete the whole 90 card base set. I was thinking of trying to put together the 70 card Classic Scripts autograph subset together, but after seeing the middling cards go for $4 to $10 each and the Whitey Ford auto go for around $36, I decided that that 70 card series would cost me over $500 to put together. With that realization, my ambivalence towards this set grew to enough of a level that I abandoned the idea. That is money better spent on putting together vintage sets. Hindsight being what it is, I probably wouldn't have ordered this box. In the future, before making a purchase of cards that are not part of my normal collecting style, I need to take a closer look at the checklist.
Posted by carlsonjok at 3:00 PM