And the Winner Is...

As I should complete my 1977 set early in September, I was fishing around for the next set to start on. I was planning to just start keep working my way backwards and do 1976 next, but at the show two weekends ago, I was offered a deal on a 1971 starter set. It was a fairly large binder with almost all of the lower number sets (card 523 and below) for $300 and the guy threw in a really nice Nolan Ryan, which books at $150. I didn't have the cash at the time, and really needed to consult with She Who Must Be Obeyed first anyways. So, I walked at the time.

After talking with my wife we decided that it could be my birthday present, even though my birthday is in November. So, I tracked the guy back down and closed the deal. The binder arrived in the mail last week and I've worked through it, noting what cards are in there and which will need upgrading.

I am on the fence whether this was a good deal or not. Overall, there is a fair amount of nice cards here, although if I had built this set from scratch card-by-card, I probably would have skipped a number of these cards. But, building a 752 card set one-by-one is a big effort, and getting a running start is a good thing. Especially considering that this set was issued in series and the high number cards, even commons, are fairly pricy. So, how do I start off?


A fair amount of the stars are there, including the aforementioned Nolan Ryan, Thurman Munson, Pete Rose, and Hank Aaron. So, let's look at a few of my favorites. 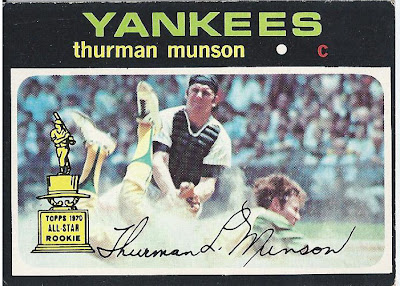 It isn't in bad shape, but I did add it to my upgrade list. It isn't a huge priority, given how expensive this card is, but I think I would like a nicer version. 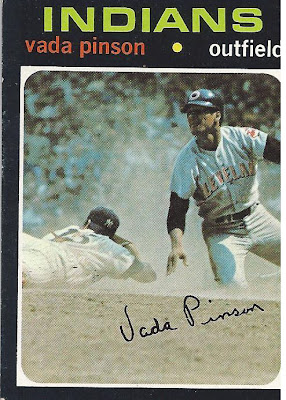 The centering isn't great on this card, but it is not nearly as bad as it looks. It is more an artifact of a scanner issue. I like the action shots in this set, most of which appear to have been taken in New York. Not surprising, since that is where Topps is based. 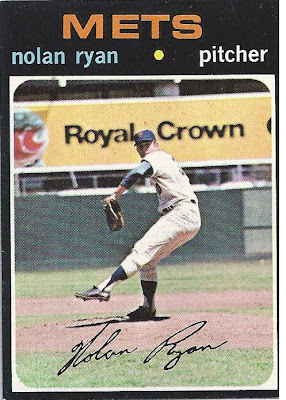 I don't get this. No question, Ryan was one of the all time greats. But, I am not convinced that his 1971 card should be the most valuable in the set. I would have thought Roberto Clemente's would be, given that it is also a high number card. Sometimes, I get the feeling that Ryan cards have been artificially inflated, not unlike Mickey Mantle cards. Discuss. 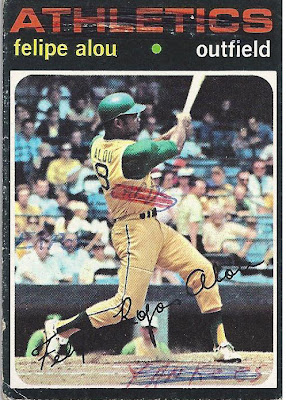 Alou was traded to the Yankees early in the season. Some collector meticulously noted the transaction on his card. 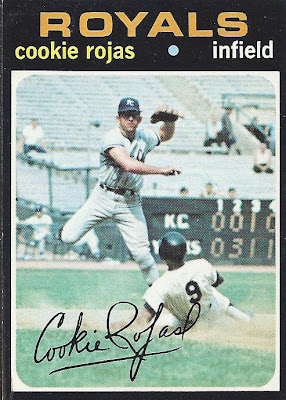 Another New York based action shot. I believe that is Ron Woods sliding. 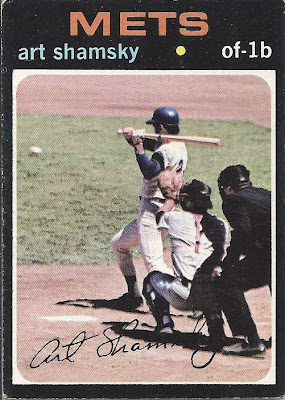 Art looks like he is about to be HBP. 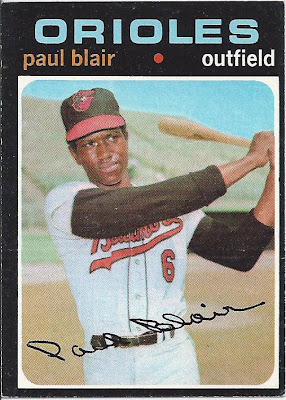 And, last but not least, the subject of my one player collection, Paul Blair.

Posted by carlsonjok at 5:45 AM