You Don't Have to Tell Me I Have a Problem

I know I have one. I stopped by Wally World tonight to pick up something for dinner and some rawhide chews for our new dog. I broke down and, despite swearing off Update, I bought one of those 72 card value boxes that include one Diamond Anniversary code card. Alas, it was a good hit on the ole crack pipe, if you get my drift.

I got two Yankee base cards. 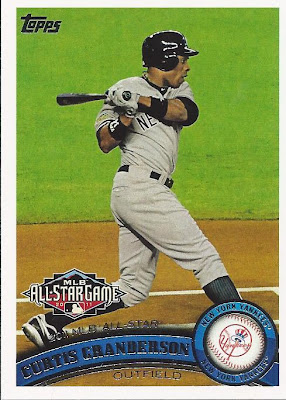 The Grandy Man, who was the core of the Yankees line up this year, and a leading candidate for AL MVP. 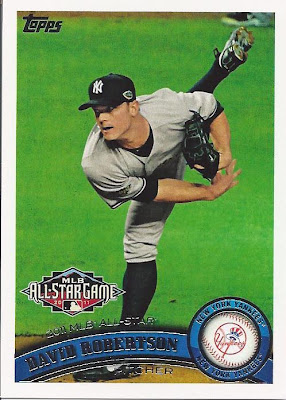 David Robertson was absolutely phenomenal out of the bullpen this year. He went from the "six inning guy" to the "seventh inning guy and, finally, to the "eighth inning guy" when Rafael Soriano and Joba Chamberlain went down with injuries. And he never cracked under the increased pressure. In 70 appearances, he turned in a 4-0 record with 1 save, a microscopic 1.08 ERA, and a unbelievable 13.5 strikeouts per 9 innings pitched. 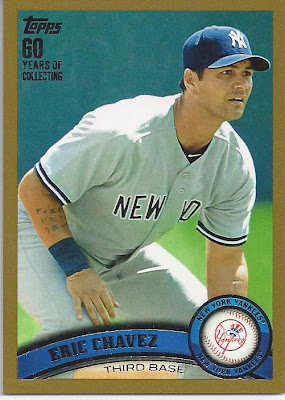 Another Yankee, Eric Chavez, who was a steady backup infielder when Alex Rodriguez was on the disabled list. This is a gold parallel (1163/2011). 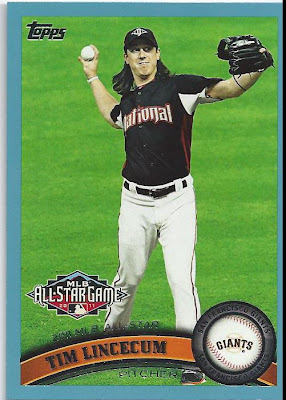 I got two of these blue border parallels. The Lincecum above and a Asdrubal Cabrera. I have no idea what the deal is with these, except they are apparently yet another of the eleventy different parallels Topps saw fit to release with Update. Grrrr. 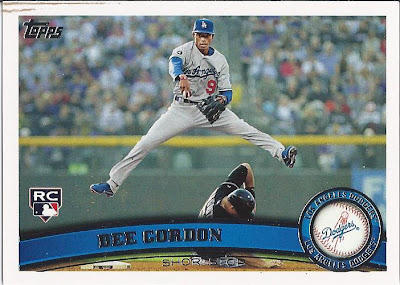 Dee Gordon, who I saw playing for Albuquerque at the OKC Redhawks season opener this year. I also really like this picture. Probably the best of the pack.

And finally, the best card of the lot: 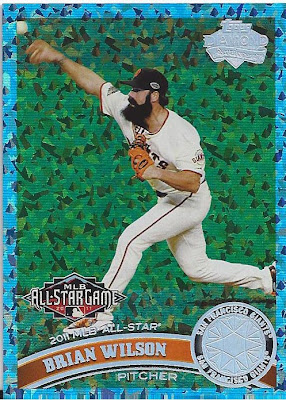 Yeah, I know it is Brian Wilson. But, it is the Hope Diamond Parallel (45/60). This bad boy is going up on EBay to make me a little cash to put towards cards that are of more interest to me.

So, the only matter left to take care of is the code card. I had decent luck with the code cards this year. The best cards that I unlocked were a Mickey Mantle Diamond Die Cut that I sold for $47 on EBay and a 2001 Topps Archive Willie Mays Autograph card that I kept. I got a decent number of cards from the 1950s, 60s, and 70s. And a whole lotta junk. I wasn't real hopeful what this code would turn up. But, I think I did alright. 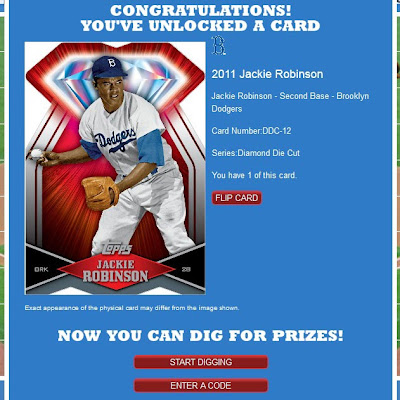 I know Night Owl already has one, so this may go up on EBay also. I have decided to start working on 2001 Topps Heritage and this may help get me started. Of course, I am also open to trade offers, so if you have some 2001 Heritage duplicates, shoot me an email and let's see if we can cut a deal.
Posted by carlsonjok at 5:20 PM