The card aisle at the Super Target I shop at is right next to one of the express checkouts. In fact, it is next to the express checkout that is open 90+% of the times I am in there. The aisle isn't very wide, so if I want to get in and look at the cards, I have to squeeze past people in line and stand uncomfortably close to the person that is actually checking out. So, as you might guess, I rarely buy cards at Target.

But, today I did some rare early morning shopping and, wonder of wonders, the express line was closed. So, I sauntered in and took a look at what they had. Football seemed to be taking over and nothing was grabbing me. I almost left empty handed when something caught my eye that was so glorious I was momentarily star struck. 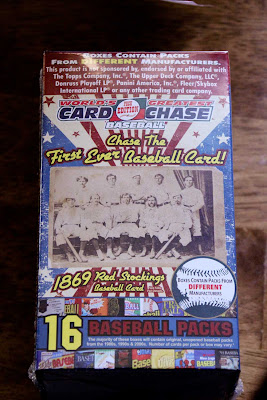 Isn't that beautiful? Can you read that caption?

The majority of these boxes will contain original, unopened baseball packs from the 1980s, 1990s, and 2000s.

Isn't that wonderful? No sorting of cards and comparing to checklists. No checking relic or serial numbered cards against EBay to see just how little they are really worth. No expectations whatsoever. Just a big old box of crap. What could be more fun than to open it up? I couldn't think of anything at the moment, so I bought it.

And I now christen a new feature (well new to me anyways) called BOBOC (Big Ole Box of Crap.) It should give me something to blog about during the next couple of months when our thoughts (and checking accounts) focus on the holidays.
Posted by carlsonjok at 7:30 PM