My collecting niche is set building, but having my youth collecting during the 1970s, I am getting rather jaded about modern sets. As I have probably said eleventy times, I am downright scornful of all the inserts, parallels, and short prints that Topps is putting into their sets now. I have registered my protest by only working to complete the standard base cards from the 2011 sets that I have been working on. I'm sure Topps doesn't know about my protest, and even if they did, I am pretty sure they don't care.

Having got that off my chest (again), I completed a recent trade with Night Owl that allowed me to rid my self of hated inserts. I sent him some of the Lineage 75 minis and I was able to make progress towards completing two different base sets. Plus he sent me some other cool cards. Let's take a look, shall we? 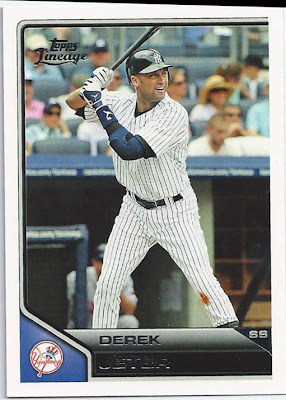 Cap'n! Before this trade, I still had 12 Lineage base cards on my want list. After the trade, I have 5 left. Derek was part of the 7 I received. 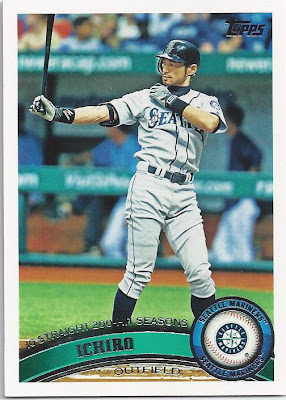 As the youngsters say, W00T! Ichiro was the last card I needed to complete 2011 Series 2. In celebration of having the set complete, I took Night Owl's want list and scoured the vintage dollar boxes at the show this past weekend. I found two cards for him. One of which was a 1960 Wally Moon. Alack and alas, he managed to find the same card in a dollar box at the show *he* attended over the weekend. So, I'll keep Wally and his magnificent unibrow and send along the 1960 Ed Krakow with the Fleer Greats Dodger duplicates I set aside for him. 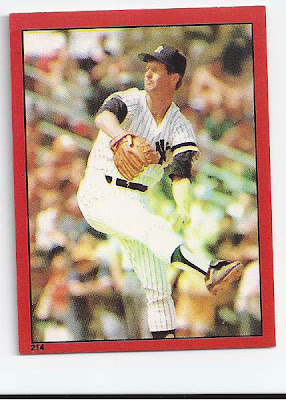 1982 Topps Stickers. He sent Dave Winfield and Tommy John (who apparently is a pitcher and not a surgeon.) I have this urge to go out and buy a Trapper Keeper to stick these guys on. I kid. 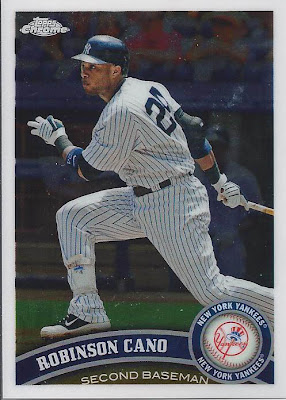 2011 Topps Chrome Robbie Cano. It was accompanied by a Lance Pendleton, who is no longer a Yankee. He was claimed off of waivers by the Houston Astros early in September. He didn't do real well with them in a scant 4 innings of work and was outrighted to the OKC Redhawks after the season was over. So, I may get a chance to see him next year. 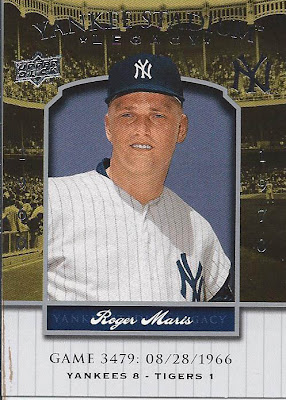 Night Owl sent two of these Yankee Stadium Legacy cards. I think they are great looking cards. And only 6598 to go to finish the set! Seriously, if this set was more reasonably sized, I would try to put it together. I like it that much. As it stands, I'll gladly take them in trade and will certainly buy them when I find them in quarter/dollar boxes. But, I would need to get a larger house if I was going to chase this one. A 6600 card set would involve 9 or 10 large binders and would take up nearly half of my storage closet. 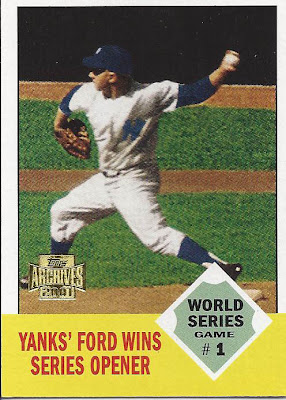 I do like these Topps Archive cards alot and have added them to the list of sets I'd like to put together. I'm starting to get stretched a little thin with having 3 active sets and getting ready to start another, older Heritage set. But, this is definitely a strong contender. 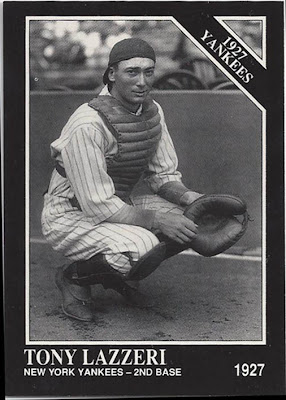 And finally, a Conlon Collection card. I really appreciate the simplicity of this set. Such no-nonsense design is what drew me to the Renata Galasso set that I built earlier this year. With a total of 1430 cards issued over 5 years from 1991 to 1995, this is definitely a set I'd like to work on. It is, at this moment, a leading contender for my list of 2012 set priorities.

So, thanks N.O. Definitely a great trade!
Posted by carlsonjok at 5:00 AM