Now that the calendar has rolled over into October, I'm to get back into some hobby activity. I've decided that, this month, I want to finish the 1977 Topps and 2004 Fleer Greats base sets. I'd also like to start on Topps Heritage Minor League and start filling in my 1971 set, as well. And I have my eyes on a few interesting Paul Blair cards.

So, to celebrate getting my October paycheck, I bought another box of the first series of Fleer Greats of the Game from Matt's Baseball Cards in Watervliet, NY. I have had a uniformly positive experience with him and I may just have to peruse his box sales list to see if there is anything else that might interest me.

In any case, as is my habit, I woke up this morning and after taking care of the dogs, I settled in to review my overnight EBay alerts, one of which is for "Fleer Greats of the Game Box." And what should show up but one box each for both series:

They had low starting prices, so I thought I might follow them and see if I could nab them for a bargain. Well, I am glad I read the descriptions. Look here, specifically the part in red: 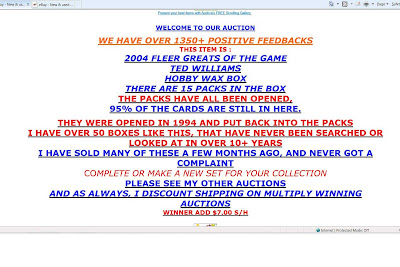 Yeah. He's pulled all the autographs out and probably the serial numbered inserts. I wonder how many people won't read the description? Stuff like that ticks me off. Although i might be interested to know how he managed to open a 2004 box ten years prior to release. I will more than likely finish the base set with the box I bought from Matt's, but have decided to also put together the numbered inserts. I'll contact him and see what exactly he pulled out and what is still there. My guess is that, if I can pick these boxes up cheap, it might be worth it to nab some of the "The Glory of Their Time" inserts, which don't seem to be all that plentiful on EBay. But, I am not hopeful.

Anyhoo, stay tuned for a series of posts later this week about my adventures opening that box.
Posted by carlsonjok at 3:59 AM