I had another post scheduled for this afternoon, but I pushed it out a day because I am excited beyond belief about what came in the mail today. I believe I mentioned before that a guy that went to the same high school as I did runs autograph sessions in Rochester, NY and Minneapolis, MN. While his events seem to be more focused on football*, he did have a couple of baseball players at his October signing. One was Met and Yankee great Doc Gooden and the other was Rochester's own Johnny Antonelli. Johnny played major league ball for 12 seasons between 1948 and 1961 with a couple years off for military service. He won 20 games twice for the New York Giants and made the move with them to San Francisco.

That was all before I was born. I am most familiar with Johnny Antonelli as the name on a chain of tire stores when I was growing up in Rochester. So, when I found out he was going to be at the signing, I managed to arrange to meet Roger Neufeldt of Sports Memories of Oklahoma at his warehouse on the one day he was in town after a show in Houston and before he left to go to the Chantilly show in Virginia. I managed to pick up about 6 Antonelli cards and chose 4 to send in to get signed. Well, they arrived back today. And here they are: 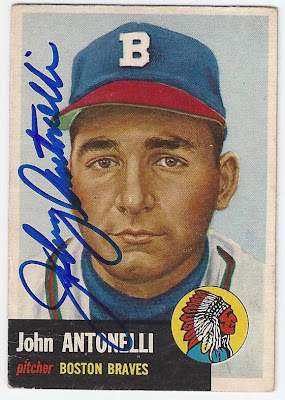 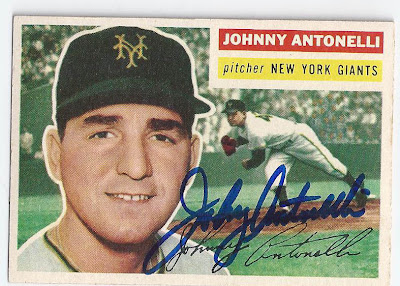 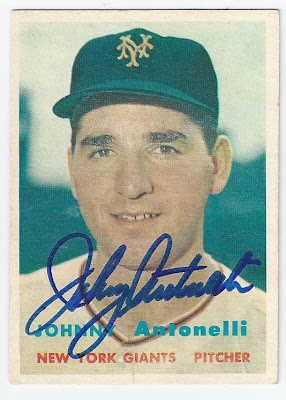 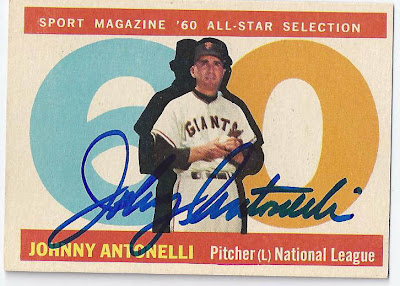 * This October signing also featured Thurman Thomas, Bruce Smith, and (until a last minute cancellation due to Kent Hull's funeral) Marv Levy. Having lived and died with the Buffalo Bills through both lean and flush years, I was very tempted to send items in for them to sign as well. But, when I totalled up the cost to buy items to have signed and the cost of signatures, I decided to stick with Antonelli this time around. As it stands, Marv Levy has recommitted for a December signing in Batavia, and I may very well send something in for his signature.

One of my recollections of watching the Bills on TV back then was when the cameras would zoom in on Levy swearing a blue streak at an official. The announcer would always say some variation of "I'll bet he didn't learn those words at Harvard!". If I do send something in, I think I'll ask for that as an inscription.

By the way, if you are a Bills fan or a Vikings fan, you need to check out the upcoming signings at The Sports Corner. If my experience is any indication, you won't be disappointed.
Posted by carlsonjok at 1:00 PM