I have written previously about my desire to complete the 2004 Fleer Greats of the Game set and my difficulty in finding any packs or boxes of the second series. 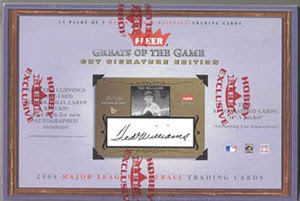 I have finally been rewarded. A box came up on Ebay about a week ago, and I have patiently waited for the auction to reach it's denouement, which was last night. I was not about to let this one slip away from me, so I resolved to pay way more than it was worth. Luckily, I didn't come to that. The other bidders weren't nearly as desperate / stupid as I was, so it is now mine.

The only thing left now is to obsessively check EBay every 10-15 minutes to see when it ships. And to open the packs. And, I suppose, to blog about it.
Posted by carlsonjok at 5:10 AM