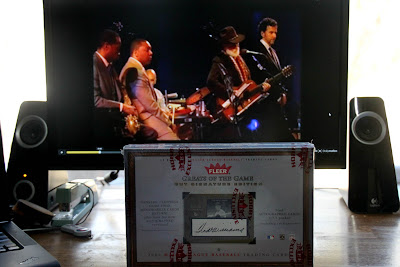 FedEx just left and I have my box of 2004 Greats of the Game in my excited little hands.

Here is the plan. I am going to try and limit myself to opening three packs a day and to blog each group separately. Whether I can stick to that or not is another matter altogether. Frankly, I used to get so terribly excited on Christmas Eve that, once, my mother actually had to slip me part of a phenobarbitol so I would fall asleep until Christmas morning. Parenting was a bit different back then. So, as you might guess, my impulse control can be a bit problematic.

That said, I figured I might figure out what I can expect from this box, based on the number of packs (15), number of cards per pack (5), and stated (but not guaranteed) odds.

Given that I already have 26 base cards from the second series, I am hoping to get all, or at least most, of the remaining cards I need among the 69 expected base cards.

So, I have taken the three packs that seemed thickest and put them on the bottom, figuring that they are the ones likeliest to have hits in them. They may just end up being the packs with a checklist card added in, so my plan to save the best for last may be foiled. We'll see, and that is the exciting part anyways.

I've got another post sketched out about a great vintage break I participated in over at Crinkly Wrappers, which I will try and work on this week also. But, I have no clue as to what will go up when.

Oh, and in case you were wondering, that video playing in the background of the picture above is Wynton Marsalis and Willie Nelson playing one of my all time favorite songs, the old Hoagy Carmichael classic "Georgia on my Mind." Ray Charles still sets the standard for that song, but Wynton and Willie do come close. Here is the video. If you like jazz, blues, or country, you will like it.


ADDED LATER: Yeah, no impulse control. All 15 packs have been opened and I did get the hits generally in line with the expectation. There was one big hit and one big disappointment. I'll still blog 3 packs a day, but in the mean time, does anyone have a subscription to Worthpoint or Beckett Online Price Guide?
Posted by carlsonjok at 1:50 PM

Email ThisBlogThis!Share to TwitterShare to FacebookShare to Pinterest
Labels: Greats of the Game, music