I Got An Idea


I've been foreseeing a bad winter. Not weather wise as it were, although it may be. Mainly, I see it being a bad winter for collecting. The drought this year has driven up the cost of feeding our horses precipitously. Plus, we are going to have an electrician in next month to do some improvements to help us manage the farm better during bad weather. In short, my budget is going to be tight heading into the holiday season. Complicating matters, there is going to be another card show in October where I wanted to start working on my 1971 set. I was unsure how I was going to manage my adult obligations while still indulging my inner 9 year old. Then I had a brilliant idea. 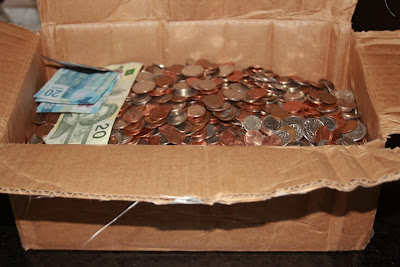 I have a 3 foot tall change bank that looks like a coke bottle. I have had it for a while and about every 3 or 4 years I cash the change in. So, yesterday, I dumped all the coins into a smaller, easier-to-handle box, threw in some foreign currency I had lying around unused after past business trips, and headed off to the bank. I figured I would clear around 2 c-notes. Boy, was I in for a surprise. What you are looking at above is a bit over $450 in coins. The bank wanted to charge me a $35 fee to exchange the currency. Given that you are looking at about the equivalent of $34.20 US in foreign currency, I just stuffed the bills back into my pocket.

Now, I have no intent of spending all that at the October show, but it should get me through the lean winter months. So, I am mapping out a few goals:

So, that is about it for the moment. I don't think I can do all of what I have listed above, so I may just drop the last two.
Posted by carlsonjok at 3:00 PM