A week or so back, dayf over at Cardboard Junkie held a contest to pick the Super Bowl winner and the winner's point total. Along with that, was a second chance contest if you made him some pony artwork. So, since I have two ponies here on the farm, I dredged through my photograph files to find a snapshot to use. Alas, I didn't have any good shots of the two ponies together because, well, they don't get along.


But, I did decide to use one of my favorite pictures, what I refer to as the Mini Me photo. And, of course, what do you do with a picture of two horses that look a lot alike? Why you put them on a 1977 Topps Big League Brothers card. And here is what I created: 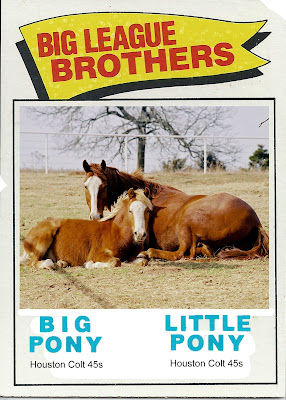 I am not going to take you through the creation process, but I will mention a couple things about how I chose what I did for this custom card.

First, the choice of Big Pony and Little Pony for the names is based on more than just there size. It is actually a tip of the hat toward the Waner Brothers, Lloyd and Paul, who were born about 30 minutes from here in Harrah, OK. The Waners were known, of course, as Big Poison and Little Poison.

The choice of the Houston Colt 45s was mainly because it was as close as I could get to a horse themed MLB team nickname. Yes, I know they were actually named after a gun, not a horse. But, what else would I have chosen? I suppose I could have gone with the Pittsburgh Pirates, since that is who the Waner brothers played for, but I didn't think of that until afterward. Sue me.

Now, let me reveal this cards secret problems. The larger of the two equines isn't technically a pony. A horse is generally considered a pony if it is less than 14 hands tall at the wither (the vertebrae where the upper neck, shoulder and back come together.) The big guy in the back stands 16.2 hands tall. Also, the two horses are not brothers. Indeed, they aren't even related, except in a vague evolutionary sense. Penny, in the foreground is a 11 year old registered Welsh Pony. Jack, in the background is a 26 year old Quarter Horse. If that wasn't sufficient reason to put away the notion of brotherhood, Penny is a mare. For you city slickers, that means she is a girl. But, we shouldn't let minor matters like gender and genetics stand in the way of great art, should we? Of course not.
Posted by carlsonjok at 2:00 PM