Well, this set of packs was chock full of big hits. Let's not waste any time looking. 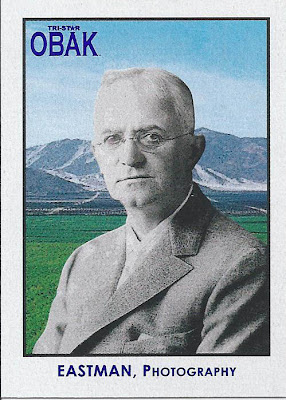 Having grown up in a Kodak family and being an amateur photographer, this card is one of my favorite base cards. It is a shame that Kodak has fallen on hard times, but I am hoping they come out of bankruptcy a leaner and more successful company. 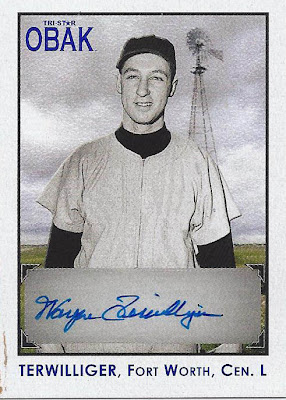 Here is my first autograph card. It is a sticker auto, which I don't mind since it is still a sharp looking card. Ignore the shmutz on the bottom of the left border. My scanner really needs a good cleaning. 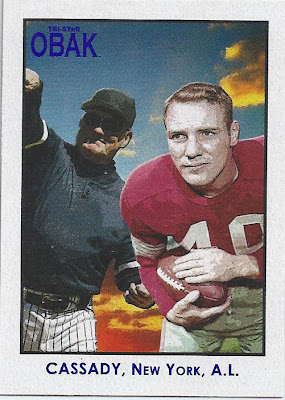 Cassady, the 1955 Heisman Award winner played 9 years in the NFL. He never played professional baseball but, as a friend of George Steinbrenner, he was a scout and minor league coach in the Yankees organization. 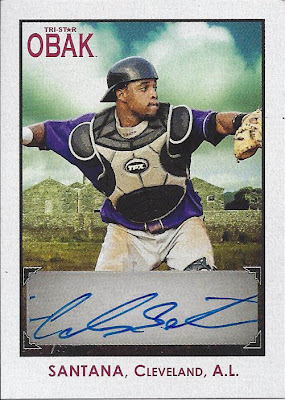 This is where Baseball Dad is possibly drooling. An extremely rare (number 2 of only 5 printed) Carlos Santana autograph. Actually, here is my one complaint about this set. The difference between the base cards and the various levels of serial numbered parallels and auto cards is the color of ink on the back and maybe the original OBAK tobacco slogan that is printed in large letters across the card back. That is it. It is a minor complaint, though. 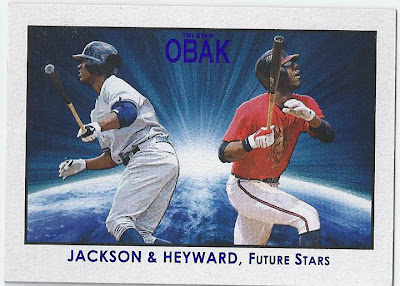 Not much to say here. Austin Jackson was a highly touted Yankees prospect until he was traded, along with Phil Coke, to the Tigers for Curtis Granderson. I think the Yankees got the better part of that deal. Both Jackson and Granderson strike out a lot, but Austin doesn't compensate for that with any real power. 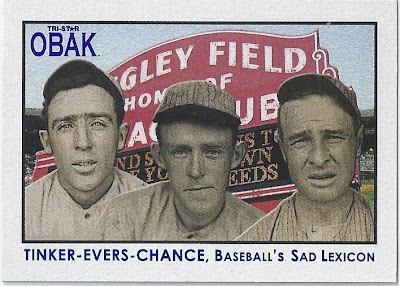 Definitely nothing to add here. This is one of my favorite cards. I like how they superimposed the players pictures over the Wrigley field sign. Sometimes in this set, the choice of background image defies explanation. This one does not. Perfect. 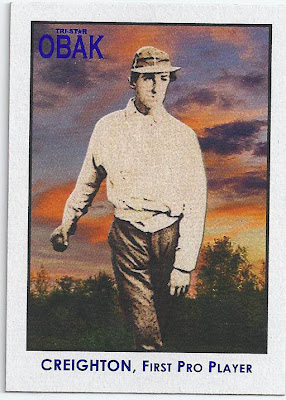 The card back reads:

Jim is cosidered the first professional ball player and superstar. He is said to have thrown the 1st fastball and completed the first triple play. In 1862, at the age of 21, it is believed that he was not put out at bat during the entire season. Sadly that season, from an unknown cause, he suddenly passed away. 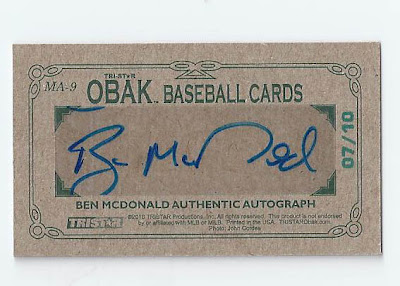 The third auto card in this group of 4 packs. I am only guaranteed 3, so the rest of this may end up being boring. We'll just have to see.
Posted by carlsonjok at 2:00 PM