I am not a prolific trader.  Last year, my first back in the hobby I made a fair number of trades. A fair number for me, mind you, is a month's worth for other bloggers.  This year, with my decision to limit my collecting scope to vintage, Heritage, and oddball sets like Obak, my trading activity has dropped off to almost nothing.  But, there are a few bloggers I still manage to work out trades with.  Chris, over at Nachos Grande, is one of them.

Some of you may recall that I recently got a killer deal on a box of 2006 Fleer Greats of the Game. I wasn't particularly fond of the set, but was pleased to see a post by Chris a few days later about his quest to finish the insert sets from 2006 GOTG. So, off I flew to his want list and found a few cards in my box that he needed. In exchange, he found some 2012 Heritage that I needed. 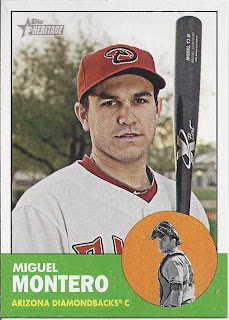 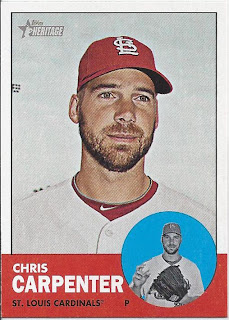 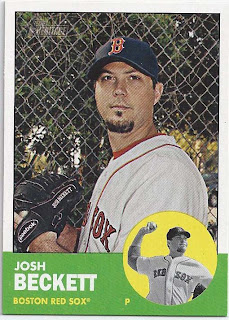 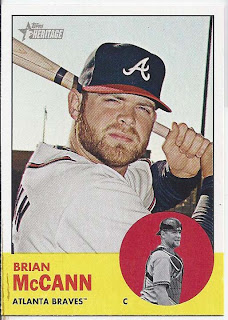 I have to admit a love-hate relationship with Heritage.  It is a great set in that it is evocative of vintage sets, which are my first love. Not only the design (obviously), but how it focuses on staged photos and is printed on real cardboard.  On the other side of the ledger is the large number of short prints in the base set and the fact that it comes and goes from the store shelves in a short period of time. I can go to my local Target or Walmart and still find Series 1, but Heritage is gone.

I have entered that dead zone that appears in July after Heritage has been supplanted on store shelves with other products.  There is nothing to buy and little to trade.  These were the first Heritage cards I have scored in a few months, so I was pleased to get them.  It gets me a closer to finishing the 2012 set without having to go to COMC or Sportlots.  So, if you have any Heritage laying around, take a look at my want list. I am working on 4 sets (2001, 2002, 2011, and 2012). If you have some cards I need, let me know. I'll make it worth your while.

Coming up tomorrow (or some day soon) another trade involving GOTG and Heritage with another of my regular trading partners.  I won't say who, but I will give you a clue: he is probably wanting to take a red pen to this post since I have ended at least one sentence with a preposition
Posted by carlsonjok at 6:25 PM

Email ThisBlogThis!Share to TwitterShare to FacebookShare to Pinterest
Labels: 2012 Heritage