Yesterday, I had a post about a trade with Chris at Nachos Grande, who seems to be one of my more frequent trading partner. Today's post is about another blogger I trade with frequently, Night Owl.  Okay, so I suppose that he wouldn't consider it frequent, but since I only complete 1 or 2 trades a month, the fact that I have had multiple trades with him makes him a frequent trader for me.

As you will recall from yesterday's post, I had a box of 2006 Greats of the Game that didn't excite me. I sent a number of inserts to Nachos Grande.  But, Greg had requested the Nickname Greats Jay Johnstone card that included a picture of someone who was not Jay Johnstone. Read Night Owl's take here.  This occurred at the same time as I went to the August card show in OKC, where I found a 1958 Don Newcombe in a dollar box. As it happens, Greg needed the Newcombe. So, off Don and not-Jay went.

His return package arrived yesterday and what a package it was.  It was way too much to exchange for an error card from a mostly forgotten set and a dollar box find.  So, what did he send? 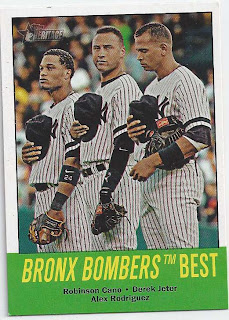 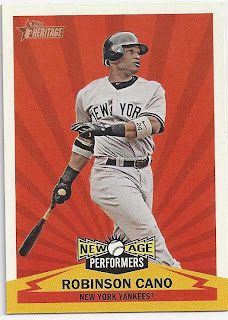 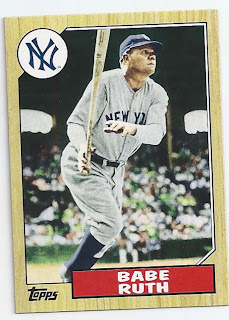 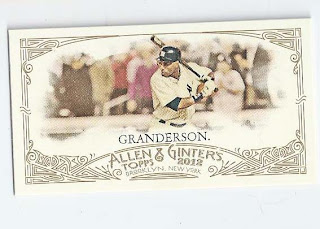 I'm not a huge fan of 1987 Topps. Nor am I real enthralled with 1962 Topps, which '87 riffs off of. But, this Ruth mini is a nice looking card.  I particularly like the old timey NY emblem.

I'm not much of a A&G fan either.  I am not sure why.  It is a quirky little set that fills much the same niche as Tristar Obak, which I love (as you will see soon). I think it is because of Topps tendency to think that if a little of a something is good then a lot of that thing is super.  Like short prints. And inserts. And parallels.I think  I really could get into A&G if Topps scaled it back some.  Okay, if they scaled it back a lot.  This Curtis Granderson mini is a sharp looking card.

As an aside, I like Curtis Granderson as a man, but I am starting to sour some on him as a ballplayer. His power numbers continue to be good, but his batting average is down and his strikeouts are up.  Coupled with suspect defense, he seems to be turning into a latter day Dave Kingman.  I suspect that the Yankees will pick up his option for 2013, but I would rather see the Yankees let him walk (or pick up the option and then trade him) and focus on getting some young talent.  Brett Gardner would be a much better center fielder.  Gold Glove quality.

Anyhoo, what else did NO send? 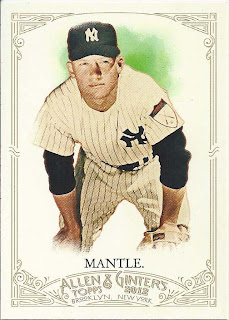 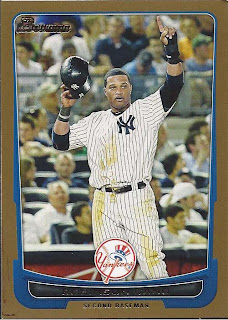 He also sent some 2012 Bowman Yankees including this gold Robbie Cano.

The final card? A night card of course! 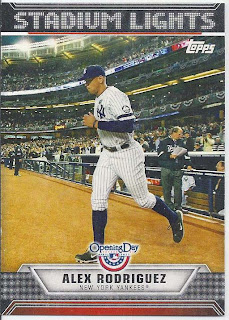 Overall, a seriously sweet haul.  All for a 6 year old insert and dollar box find.  If I make it to the October OKC show, you can bet I'll be scanning the vintage discount boxes for more Dodgers for Greg because I am in his debt.

Coming up next: something I have been waiting three months for.

Posted by carlsonjok at 7:09 PM

Email ThisBlogThis!Share to TwitterShare to FacebookShare to Pinterest
Labels: 2012 Allen and Ginter, 2012 Heritage