Third post in as many days?  I'm going to need a nap. 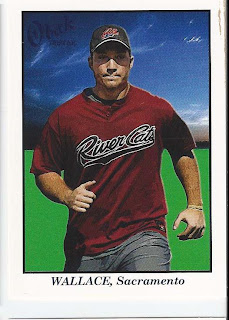 Brett is now part of the Astros organization, the poor fella.  I believe I saw him both last year and this year when he was playing for the Redhawks here in OKC, but I don't have any lasting impressions. 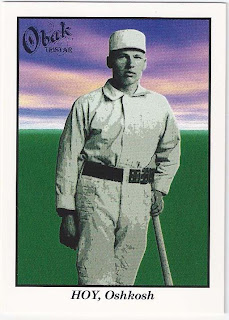 Definitely a different time and environment back then. I cannot imagine nicknaming a deaf person "Dummy" today.  He appears to have been a decent player with a .288 BA and .386 OBP over a 14 year career. But, it was a more hitter friendly game then. His appearance in this set was as a Game Cahnger.  Since he was deaf, he needed hand signals from coaches to keep track of the count while batting.  All the hand signals we see in the game today trace back to William Hoy. 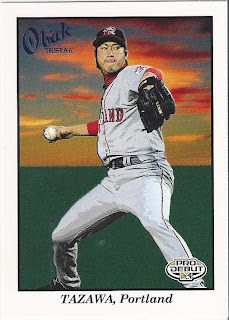 Junichi is a real up and comer.  He put up some decent relief numbers during a partial season with Boston this year. Indeed, in 6 innings over 5 appearances against the Yankees, he held the Bombers scoreless with a .150 BA. 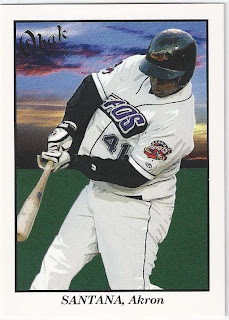 And here is that serial numbered Carlos Santana that was set aside for Plaschke.  He seems to be turning into a excellent major league backstop. I may yet regret trading his cards off. 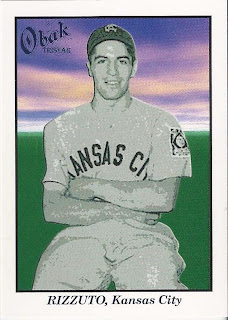 Gotta show Scooter.  I have mentioned before that one of the joys of my youth was listening to Phil and Bill White call Yankees games.  Even now, recordings of them take me back.   What else is there to say? 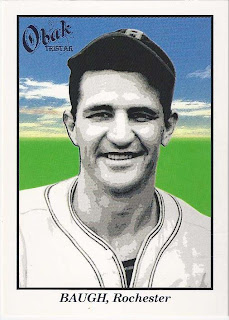 See what I meant earlier? Rochester.  Sammy wasn't much of a baseball player with only one season of  minor league ball. He did make his mark in another sport and is a member of the Handegg Hall of Fame.  Interestingly, he played for two different teams in that one year in organized baseball: Rochester and Columbus.  As you probably know, I was born in Rochester.  But, I also lived in Columbus, Ohio for over 7 years.  Nice town. 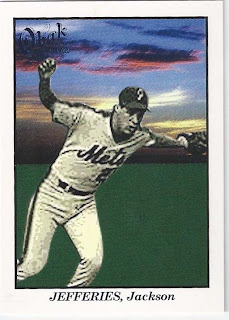 Another two time MiLB Player of the Year (1986 and 1987), he went on to a solid 14 year major league career. Looks like he is about to faceplant. 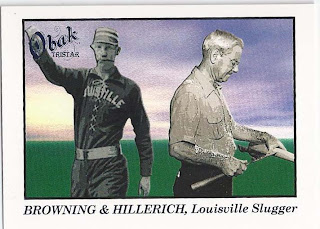 Given my propensity to chosing cards of players on teams in cities I have lived in, I probably should have chosen the card below, but it is a sad subject.  So I chose the brains behind Louisville Slugger, a bat I owned as a kid.

Okay, one more post to knock off for the 2009 Obak box and I can move on to the 2011 Obak box. That may take longer as I haven't really done much pre-planning for those posts. So, this sudden flurry of activity may come to a screeching halt.

What I am listening to:  "Seminole Wind" by Sally Timms  (fast forward to 1:10 for the actual song. Sorry about the poor sound quality. It was the only version I could find.)

Posted by carlsonjok at 2:23 PM