I am not sure what compelled me to do this. I usually looked over at the list of upcoming autograph signings by Chris Potter Sports, but rarely saw anything that grabbed me.  Sure, he had a signing with Paul Blair earlier this year, but I was out of work at the time, so I had to pass on that one.   But, after I got back to work in May I took another look at the signings they were preparing for and cross referenced it against my vintage cards.

You know where this is going, right?  Right.  I have been waiting on these to come back for three months. They finally arrived yesterday. 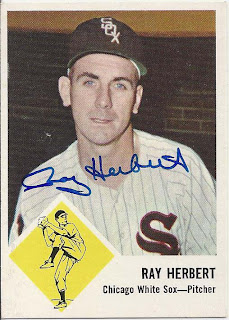 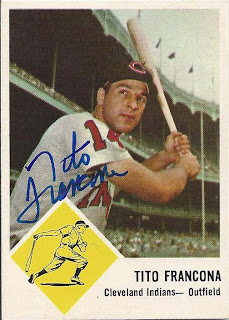 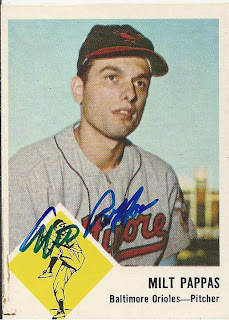 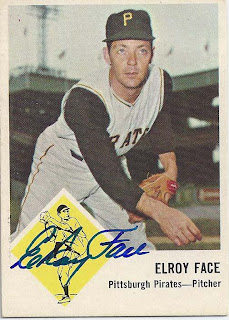 There was actually a fifth 1963 Fleer card I sent in for an autograph (Clay Dalrymple), but that signing was cancelled.  But, those weren't it. I sent a couple of other cards in for signing, one of which may make Night Owl green with envy. 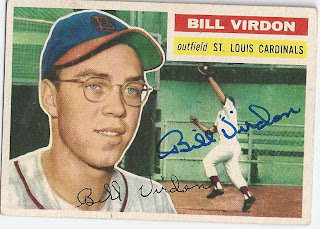 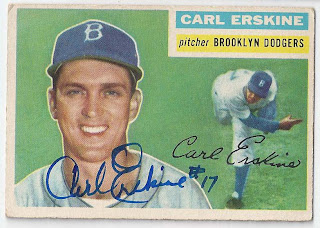 Pretty sweet.  And it has given me the idea to try and get as many of my 1963 Fleer cards autographed as possible. I'll keep an eye on Chris Potter Sports and maybe do an occasional search for other such signings. I could use some help from LA based Dodger friends to let me know if there is ever a Maury Wills signing out that way.  With only 67 cards in the set, I should be able to get a fair proportion.  Obviously, I'll never get the Roberto Clemente or Don Drysdale.  And I suspect both Willie Mays and Warren Spahn will be too expensive (there are a couple Spahn 63 Fleer autos on EBay, but at $120+ I am going to pass for now.)

And, with a new quest in mind, I am pleased to see 3 more players with 1963 Fleer cards in the next Potter signing (Albie Pearson, rank Lary, and Bob Rodgers).  Woot!!!!
Posted by carlsonjok at 6:12 PM