So, I ended up going to the card show for a short time today even though I wasn't going to, and probably shouldn't have. I found a four cards I needed for my 1971 set .  And, another dealer cut me a nice deal on 8 cards from 1955 and 1956.  One of the cards in that set was the following 1956 Gus Zernial. 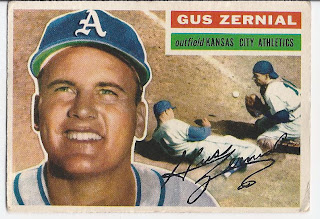 I already had this card, but took it anyways figuring there was someone who might need it.  The first want list I was going to check was that of Chris Stufflestreet, author of 1973 Topps Photography and The Vintage Sports Card Blog.   Before I could do that I decided to check a few of my favorite hobby blogs while watching the NYY-Oakland ballgame. This was how I learned that Chris passed away on Wednesday at the age of 39.  I will never come close to the tribute written by Night Owl, but I feel the need to say my piece because Chris did touch my life as both a collector and a human being.

Chris was the first person I ever traded with.  As a new collector I was buying lots of 1978 Topps off of Ebay and one lot came with a few 1978 Burger King Yankees.  As I scanned through the Old Baseball Cards site I found the want list section and discovered he was looking for 1978 BK Yankees.  A trade was born.  Over the last year and a half, there were other trades.  I don't have the heart to go back and look right now, but I do know he was always generous. Never one to look to trade BV to BV. When I professed my love for 1956 Topps, the next package he sent included 56s. He even sent me some 1977 Star Wars cards, when I started to build that set for my wife.  He was always willing to help out another hobbyist without regard for what may come back.  And this selflessness was driven home for me earlier this year.

Back in January, I was laid off from my job after over 23 years with that employer.  Amidst a period of depression and self-pity, a package arrived from Chris. This package was stuffed full of 1976 Topps cards.  As has been mentioned elsewhere, Chris has been bearing a burden in his own life this year.  It would have been easy for him to shut down and wallow in pain, much as I had done during the early days of my unemployment.  But, he took time to review my want list and send me a large portion of the remaining cards I needed. No reason. No expectation of anything in return. Just a kindness to someone he had never met in person.  It was a welcome pick-me-up during a time when I really needed one.

That is how I have always thought of Chris, as a kind person.  For me, there is no higher praise that I can offer.  Unlike many of you, I have no faith that anything awaits us when our time on this earth comes to an end other than dust and oblivion.  I will say this: if there is any heaven, and it has not prepared a place of honor for Chris, it is not deserving of the name.
Posted by carlsonjok at 1:49 PM