Cards from The Junkie, Part 3

So, if knocking cards of my 1976 Topps and 2001/2 Heritage want list wasn't enough (it was enough. More than enough), dayf also sent along a sampler of 10 cards from each Topps Heritage set that I haven't started. Since I haven't started 2003 through 2010 yet, that means he sent along 80 cars. 80. Eighty. Eight-zero. 1010000. I am a little embarrassed to get such a return for my amateurish Pony card.

Since what little creative ability I have has been sucked out of me by waiting to hear if I got the job I interviewed for (and replaying the interview in my head pretty much continuously,) I decided to pull one card out of each year's sampler that I like and show it. Yeah, I know. Boooooooring. So sue me. 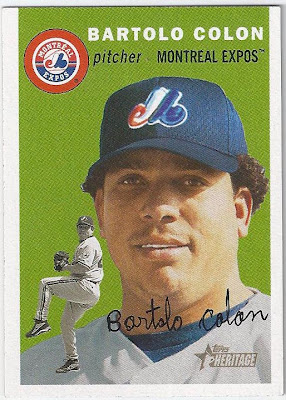 2003 Heritage Bartolo Colon - I love Bartolo. He was a godsend to the Yankees last year. I was disappointed that they didn't resign him, but I am glad that he caught on with the A's. I didn't see any of the A's - Mariners games from Japan, but I understand he pitched 8 innings of three-hit ball (86 total pitches, which implies his control was pretty good) in his first start of the regular season. He is one of the few non-Yankees I want to see do well this year. 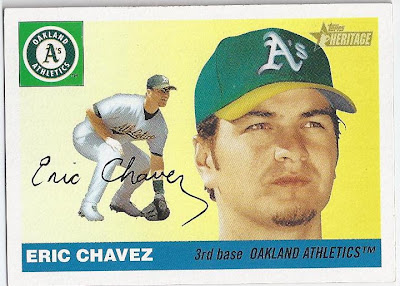 2004 Heritage Eric Chavez - Eric is starting his second year as a utility infielder for the Yankees. 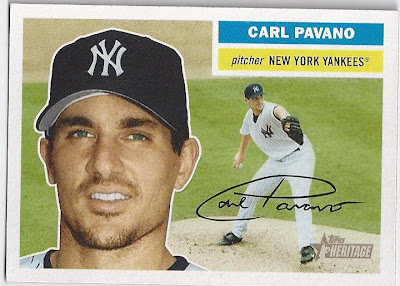 2005 Heritage Carl Pavano - Being a Yankees fan, I read a lot of Yankees blogs. And they cannot stop talking about what a bad free agent signing Carl Pavano was, both in terms of productivity and as a team member. 2012 will be the fourth Pavano-free season in the Bronx. Let it go, guys, let it go. 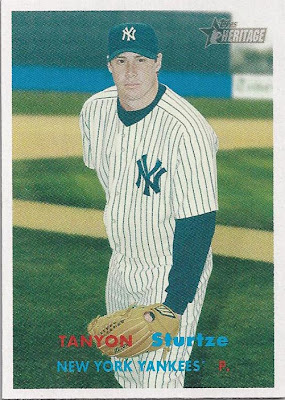 2006 Heritage Tanyon Sturtze - Only being back into baseball for a couple years now, I had never heard of Tanyon Sturtze. Having looked at his career stats over at Baseball Reference I can see why. He is the epitome of the journeyman middle reliever(2 years of starting for Tampa Bay notwithstanding.) 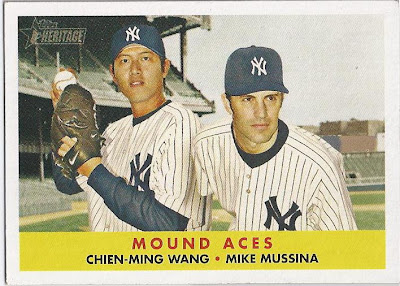 2007 Heritage Chien Ming Wang / Mike Mussina - Yankee Aces. Of course this is the card I would show, even if neither are Yankees anymore. 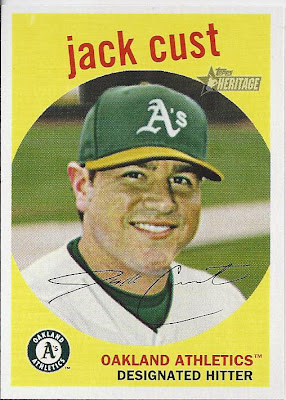 2008 Heritage Jack Cust - The Yankees just signed Cust to a minor league deal. The thought is that they brought him on board as left handed DH insurance, since Raul Ibanez was sucking so bad in Spring Training. Ibanez has finally found his swing over the last week and has been tearing it up with 3 taters so far (and would have had a fourth except he was robbed by a highlight reel-worthy catch by Jason Heyward.) 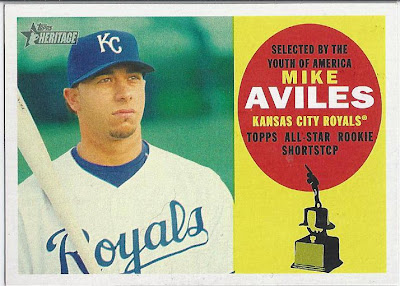 2009 Heritage Mike Aviles - No idea why I chose this one. 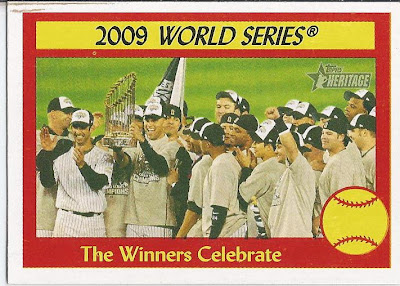