I know I am supposed to be sworn off buying cards until I am re-employed, but I couldn't let this one pass me by. 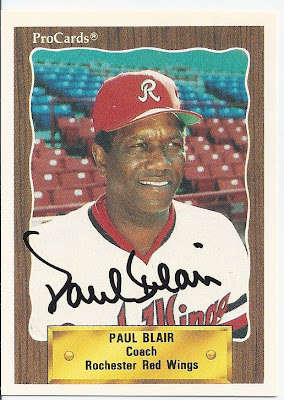 I have been wanting to add this card to my Paul Blair player collection for some time. Unfortunately, the only one I was ever able to find was on EBay and the seller had it set as a Buy It Now listing with a price of $12.99 plus $6.00 for shipping. Now I want this card, but it can't be worth more than a dollar. There is no way I would drop $12.99 on it and, frankly, six dollars for shipping a single card is outrageous. So, when an autographed version came up for auction with free shipping, I was obviously interested. After waiting nearly a year for one to come up that wasn't priced outrageously, I wasn't about to let a little matter like losing the farm (literally) stand in the way.

I kid. The final price was $8, which wouldn't break the bank one way or the other. And now I have it.

As far as my job search goes, this has been a positive week. My second interview on Monday for one job went well, and I was told they should be making a decision and offer next week. On Tuesday, I had a first interview at another company and it went well. One of the interviewers dropped some hints that they would probably be making an offer. I didn't get a real good vibe off the place, but beggars can't be chosers at this point. As it is, I have another interview scheduled tomorrow morning for a third job, so I hope to have some options here in the near future. I'm ready to be a productive member of society again.
Posted by carlsonjok at 12:30 PM