I'm not much for group breaks. They are generally set up for team collectors. Since I am a set collector, there isn't much incentive for me to join. If it is a set I am building, then I already have smatterings of cards from each team already and I am likely to get a lot of duplicates. If it isn't a set I am building, then there is, as you might imagine, even less reason to join the break. So, over the last year, I have joined exactly one break, a vintage break over at Crinkly Wrappers. I had a good time and got some nice vintage cards. Although this was hardly the oldest card I got in the break, it was definitely my favorite. 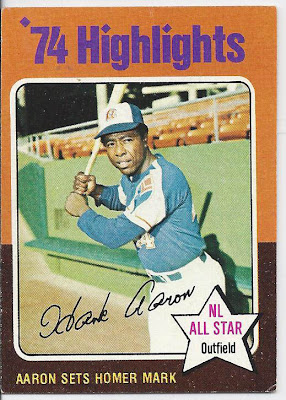 Yesterday, I referred to this as the "after" picture in a pair of #1s. Hammering Hank set the home run record during the 1974 season. Card #1 of the 1974 set celebrates that fact that he will break Babe Ruth's record during the upcoming seson. Card #1 of the 1975 set celebrates that he actually did. If you expect to see that 1974 Aaron on this list, you may be right.

Coming Tomorrow: An auto on a vintage card.
Posted by carlsonjok at 3:00 PM