I've mentioned before that my collecting has become haphazard. I do try and keep myself to a limited number of sets. I probably have 8 sets I am actively working right now. That may not seem like much, but I feel unfocused with that much in the works. Further, there is no pattern to how I start new sets. I start what interests me at the moment. But that tends to lead me to starting vintage sets in a sequence like this: 1978, 1974, 1977, 1971, and 1976. See what I mean?

So, what is the logical thing to do? Start another set, of course. And not any old set. No siree. One that is completely different than anything I've done before. Let me introduce what was an early Christmas present: 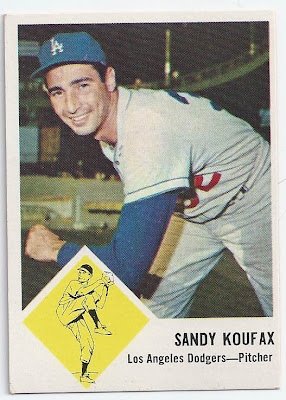 I'll probably dedicate a post to this set in the future, but for now, I have to share this cool card. It was really a toss-up between this Koufax and the Maury Wills from the same set. I ended up settling on this one since it is probably the most valuable card I own. Although, it isn't even the highest value card in this set. But, I don't want to give away to much. I'll probably do a post on the set after New Years.

Tomorrow: The Grand Finale. My favorite card of the year.
Posted by carlsonjok at 11:13 AM