I've been around trading card blogs long enough to have seen a few complaints about how Topps keeps re-using images in multiple sets across a number of years.  This is something you may hear from team or player collectors,  I was struck today that this isn't an issue particular to Topps or even to modern trading card issues.

As you may know, I have a side collection of horse themed tobacco cards. I had recently acquired the 25 card 1926 British American Tobacco Prominent Racehorses set.  I was getting ready to put it in sheets and add it to my binder, but needed to move the collection to a larger binder first.  As I was moving the pages from one binder to the other, I saw something familiar.  A sheet of cards that looked identical to my new set; the 1926 Ogden's Derby Entrants  I normally check what I have before bidding on something, so I don't end up with duplicates. So, I had a sinking feeling that I messed up.  That is, until I looked closer. See for yourself. 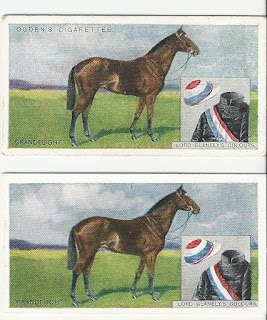 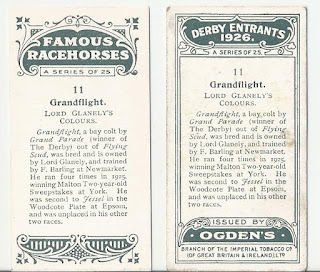 So, I was relieved that they were different sets, but they did have identical card numbers.  So, it did raise a question in my mind as to how they were related.  Here is what I found.  Ogden's was a 19th Century British tobacco company. In 1901 it was bought by the American Tobacco Company.  Also in 1901, the Imperial Tobacco Company was formed by the merger of 13 different British tobacco companies; most notably W.D. & H.O. Wills and John Player.  The following year, American and Imperial formed a joint venture: the British-American Tobacco Company.  The joint venture was to do business globally, but not in either of the partners home territories.

In 1911, the American Tobacco Company became one of the early victims of the Sherman Anti-Trust Act and was ordered to dissolve (on the same day as the more well known Standard Oil.)  Presumably as part of the dissolution, American Tobacco sold off it's shares in B.A. T.  So, these two card sets that were issued 15 years subsequent, were both associated with the Imperial Tobacco brand.

So, there you have it. Laziness in the production of trading cards is, at least, a century long phenomenon.

What I am listening to:  Sing Along by Sturgill Simpson