I also mentioned previously that I am weak.  And in the battle between logic and weakness, guess what wins?  That's right: weakness.

Last week, I ended up entering a Burl Sport's set break for 1956 Topps, a set that I finished in 2018.  I shouldn't have, but the allure of the big names drew me in and and I figured, at worst, I could probably upgrade some of the cards in my set.  I was disappointed as we passed through the 30s, where Robinson, Aaron, and Clemente reside, without hitting anything.  But, my disappointment was short lived: 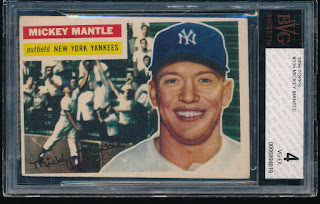 I managed to hit the Mantle card.  As you can see the card is pretty severely diamond cut. Since the break was just last night (Saturday), I obviously don't have it in hand, but I am guessing it has less eye appeal than my current Mantle.  If that is the case, I am considering flipping it for something I need, like a couple of the bigger name star cards from 1955 Topps or perhaps adding a few of the rarer autographed cards to my 1960-1963 Fleer autographed sets.  I'll take some time to think about it, but it seems unlikely I'll hang on to it.

Speaking of my Fleer autographed card project, I should have another post coming up soon with an update on a recent acquisition for that set.

What I am listening to: Call Me by Blondie

Posted by carlsonjok at 7:50 PM