I've been bouncing around a lot lately.  My life has been unfocused and, seemingly out of control.  After Christmas, I flew up to Ohio to visit my mother and, apparently, sat next to Typhoid Mary on the flight home New Years Eve day.  What I thought was a common cold those first few days of January took a turn for the worse and I missed half of the first full work week of the year.  I don't get sick often. I generally get one cold a year and something more virulent once every 8 or 10 years. So, being laid up for several days really knocks me off my routine and I'm not sure I am back on it yet..  On top of helping my wife, who I managed to infect, this week I had to do performance reviews, which are never fun, even thought I have a great group of people.

My hobby activity is similarly characterized by a lack of focus.  Well, that probably isn't completely fair, as the genesis of this post reaches back into November and doesn't really speak to my current efforts. But, you get the point.  Back in November, I discovered a new auction house that had a lot of 5 autographed 1960 Fleer cards.  The auction itself was something of a mess, as the auction house really wasn't ready for primetime. But, in the end, I won the lot and received my winnings.  So, no harm no foul.

The lot was accompanied with an auction LOA from JSA. Auction LOAs are just temporary authentications offered (probably at a discounted rate) to the auction house to help with the auction bidding.  The LOA expires a short time after the conclusion of the auction and the buyer has to resubmit the items,and pay, for a permanent certification.

Anyways, given the nature of this part of my collection, I really am looking for authentication. So, I ended up sending my winnings in to PSA and, not surprisingly, they all came back as authentic.  And, here they are: 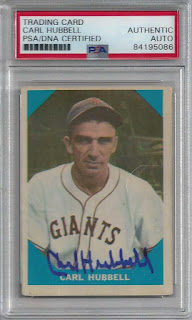 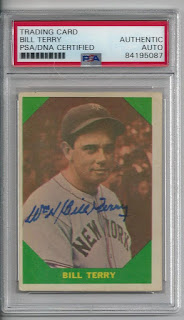 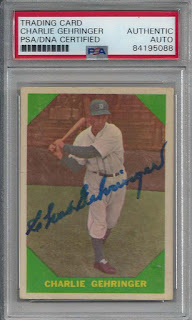 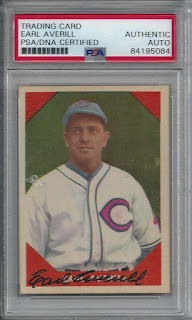 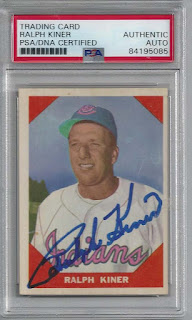 Five Hall of Famers from 1960 Fleer.  The cards themselves cost me approximately $24 each before PSA took about another $30 each. But, autographed cards of five great players for a bit more than $50 each is a pretty good deal, if you ask me.

I hadn't done much with this part of my collection since fairly early in the year.  As I thought about what I want to accomplish this year,  I set myself a modest goal to get up over the 50% level of possible autographed cards from the 1960 through 1963 Fleer baseball sets.  Where do I stand at the moment?

So, I basically need 4 more autographed cards to get to that milestone.  I've mostly been bottom feeding on the 1960 and 1961 portion of the project.  I hope this year to add at least one of the more valuable autographs in these sets. But, time and circumstances will tell.

What I am listening to: Small Paradise by John Mellencamp

Posted by carlsonjok at 9:04 PM