I've got too much going on.  I get up around 5 AM (7 days a week) and I am on the go until 7:30-8:00 in the evening when dinner is on the table. Watch a little TV or a basketball game, off to bed and start all over again the next day. Don't get me wrong. I am not complaining. I chose this life and there is nothing tugging at my time that I consider a burden and would prefer to leave behind.  But, it does require some minimal level of discipline and patience to negotiate through my life.

As collectors, we know about patience and discipline.  Or, at least we should.  I've complained here before about lacking discipline in my collecting.  I've been thinking about that more as the year winds down and decided to take inventory of what I am collecting.

Things I have completed in the last year:

Things I have worked on in the last year and are not complete:
Things I have not made progress on in the last year and should be considered on hiatus:
That is way too much. I worked on a lot and completed very little. I decided I needed to add a little discipline to my collecting as I am working on a lot and not completing much.  If this was my career, I would have been fired by know.  The obvious place to step back is the older Topps baseball sets. I am very close to completing 1968 and 1970. I should focus on those and not worry about 1955, 1960, and 1965 until they are done. Especially 1955, with those Clemente and Koufax rookie cards.  I've occasionally considered not building that set at all because of those two cards.

Should be easy right? Fat chance, when there is a source like Burl's Sports out there. Burl does vintage set breaks.  I know breaks are basically gambling. I get that all too well in that I rarely hit something interesting. So, I wouldn't call myself an aficionado of group breaks, but I will occasionally enter one if it is something I wouldn't normally collect, like pre-war sports cards or a vintage set that I have just started and am long way from completion. For example, I might be inclined to enter a 1960 Topps break because that is a set where I sit at about 30% completion.  But, I'd never pay to enter a 1965 break because I am over 70% complete because the chances of hitting a card I need is significantly lower.

But, recently Burl had a 1955 break featuring both the Clemente and Koufax cards. So, on a whim and thanks to a small windfall, I bought a four $25 slots.  I shouldn't have. I know that, but I am weak. 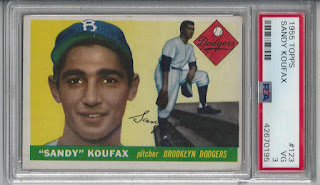 Oh my.  The second most expensive card in the set behind Clemente.  Way behind Clemente, to be sure. Beckett lists the high book value of Koufax at $1,500. Clemente comes in at $5,000.  So, am I officially prioritizing this set?  No.  I may occasionally pick up a card or two. But, that Clemente sits out there and I cannot imagine ever paying the kind of money I would need to get even a poor quality version.  Never say never, but I just can't see it.

So, with that, I hope you all have a happy holiday season and enter the new year refreshed.  I am out of the office until January 6 and have some projects around the farm to complete.  I hope to publish my 2020 goals soon, if for no other reason to have a source of shame that will hopefully keep me on track through the year.

What am I listening to: God Rest Ye Merry Gentlemen by Rob Halford.

Email ThisBlogThis!Share to TwitterShare to FacebookShare to Pinterest
Labels: 1955 Topps