2013 was a hard year to characterize when it comes to the Yankees bullpen.  There was 21 different players that made at least one relief appearance for the Yankees. Yet, there was a core set of relievers that were the models of consistency. Overall, I think the bullpen performed admirably. Very little went wrong, though what did go wrong, did so spectacularly.

What went right? Clearly closer Mariano Rivera and setup man David Robertson.   While Mo did show some signs of fallibility (with 7 blown saves throughout the year,) he was still basically the same pitcher we have spent nearly 20 years watching. Robertson was also outstanding.  While he has something of a reputation for getting himself into jams, I am not sure it is entirely deserved.  His peripheral stats (WHIP, ERA+, BA against) are quite similar to Rivera's.  The only major concern is his walk rate, which is still pretty high at around 2.6/9 innings. Although, to be fair, that is down significantly since 2011.

Boone Logan was also solid throughout the year as the main lefty out of the pen.  He is mainly a LOOGY, but can be pressed into service as a "regular" reliever, should the need arise.  Adam Warren also had good results in a partial season as a long man.  Preston Claiborne and Shawn Kelley were fine, though not particularly noteworthy as two of the remaining three main relievers.

Which brings us to what went wrong? In short, Joba Chamberlain. Joba still has good velocity, but had troubles finding the strike zone in any consistent manner.  By the end of the season, he was relegated to low leverage, mop-up duty.  As a free agent this offseason, it is safe to say he is gone. 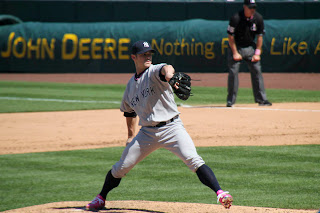 So, what are my recommendations for 2014?  Well, it is given that David Robertson takes over the closer role.  Some folks aren't sure he is cut out for it, given he performed poorly as the closer in early 2012, after Mo went down with an injury.  I don't buy it. First, he was thrust suddenly into an unexpected role with no time to mentally prepare. Further, he ended up injured shortly afterwards. I think, with all of 2013 to prepare and learn at the feet of the master, he will fine as a closer.  Not sure who I would give the set up role to, Although Shawn Kelley does have some flashy K/9 stats, his BB/9 is a bit worriesome and his HR/9 numbers are not good given he is a righty in a stadium that favors lefthanded hitters.

Myself, I would resign Boone Logan and give him a crack at the setup role.  He has been the main lefty out of the pen since 2010 and is still only 28. There is absolutely no talk on the Yankees blogs about resigning him and I don't get it. If Logan was setup man (and even if he wasn't) I would give Cesar Cabral a long look at being a second lefty reliever.

The rest of the pen would focus on Adam Warren as long man, Vidal Nuno as the swing man, and  Preston Claiborne as the generic middle reliever. I'd also give Dellin Betances a hard look to see what he can do. He has been singularly unimpressive in what little I have seen him, but he did put together a decent 2013 as a swing man in AAA.

There are a few other slots that need to be filled, but let's be honest, who really pays attention to the middle reliever market?  They are like groceries.  If one gallon of milk goes bad, run down to the store and get another.  I really don't have much in the way of knowledge to opine about who the Yankees should look to in order to round out the 2014 pen.

Up next: The infield.

What I am listening to: Fist City by Eilen Jewell