I am trying to get my home office in shape and part of that means cleaning up the shelves where I keep my card collection.  Ever since I made up my mind to focus only on vintage cards, I have been staring at boxes of random modern cards and wondering what to do with them. There wasn't enough of value there to bother with the effort of selling on EBay, but I am generally opposed to throwing them out.

So what to do?  I'm going to give them away if anyone wants them. 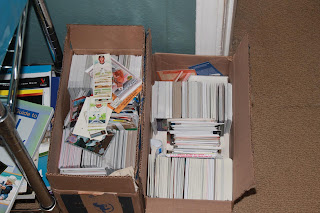 What you see here are two boxes filled with cards. They include cards from the overproduction era right up through 2011 and include most, if not all, manufacturers.  There may be a few cards in there that have some nominal value, but most are just base cards.  They aren't sorted in any way. It is just two big boxes of cards.

Anyone want some free cards? Claim a box. The only thing I will ask is that the first person can only claim one box initially.  If, after a few days, no one has claimed the second box, I'll send it to the first claimant.  Fair enough?

So, who wants some free cards?
Posted by carlsonjok at 4:00 PM