Every Dog Has His Day - Ken Sanders 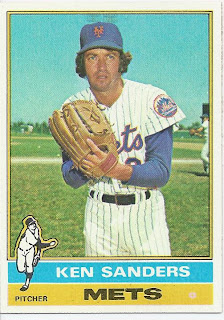 Ken Sanders career day (WPA of 0.775) was an April 18, 1971 contest in Milwaukee between the home town Brewers and the Kansas City Royals.  His day started in the top of the 8th inning with one out and two on and the teams locked in a tie with 2 runs apiece. It should be noted that Ken's entrance was as part of a double switch, in which he actually replaced catcher Ellie Rodriquez and Phil Roof entered in replacement of pitcher Marcelino Lopez, who had previously relieved starter Lew Krausse in the sixth,  and took up station behind the plate.

Lopez had started the inning off well enough, getting Amos Otis to fly out to right.  However,  after a walk to Jerry May and a single to Bob Oliver, Lopez's day was done.  Sanders entered and promptly gave up a single to Cookie Rojas, but the batted ball hit lead runner May for the second out. Ken induced Lou Piniella to ground out to end the frame.  He retired the side 1-2-3 in the ninth, allowed a lead off single to Dennis Paepke in the 10th, but retired the next three batters to escape unharmed.

Similarly, he gave a leadoff single to Cookie Rojas to start the 11th, but Cookie was caught stealing.  Two ground outs( the second a 1-3 putout,) surrounded a single by Royal third baseman Paul Schaal, and the 11th ended without any runs.  Sanders again allowed single baserunners in the 12th and 13th innings, but closed out the frames without allowing any runs.  After 5 2/3 innings pitching, Sanders was due to be the second batter in the bottom of the 13th.  Brewers manager Dave Bristol sent Ted Savage up in his stead.  Savage drew a walk, moved to second when Roberto Pena also walked, stole third, and scored the game winning run on a single by Tommy Harper.

Email ThisBlogThis!Share to TwitterShare to FacebookShare to Pinterest
Labels: 1976 Topps, Every Dog Has His Day