First unanimous selection to the Baseball Hall of Fame! 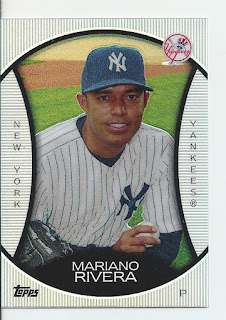 1.  He shouldn't have been the first unanimous selection.  There are others players that should have been unanimous previously. Babe Ruth, Lou Gehrig, Ted Williams, Joe DiMaggio, Stan Musial, Sandy Koufax, Willie Mays and Hank Aaron all come to mind.

2. There are those out there who don't believe relief pitchers are deserving of enshrinement in the HOF. And, certainly, modern metrics like WAR bear that out. However, Rivera was, without a doubt, the most dominant reliever of the modern era. And possibly any era. Being a Yankees fan, I watched him pitch many, many times and it is hard to state how consistently dominant he was.  Even as a 43 year old coming off a torn ACL that cut his 2012 season short, he was fearsome.

Oh, and one final note:  the card above was sent to me a few years back by Night Owl. Also, one of my best Christmas presents ever came from my wife three years ago: 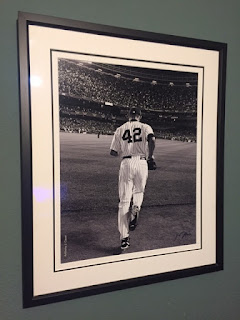 Posted by carlsonjok at 4:43 PM

Email ThisBlogThis!Share to TwitterShare to FacebookShare to Pinterest
Labels: Hall of Fame